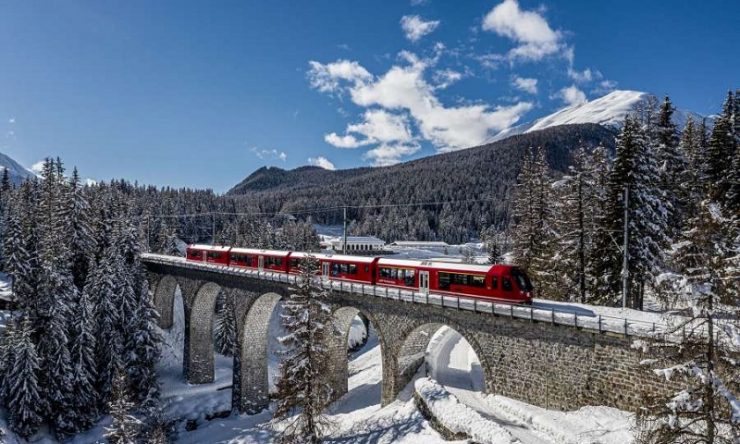 IT IS world-famous and just one of three: the railway line between Chur and Tirano, which has been a UNESCO World Heritage Site since 2008. Where otherwise observation-car trains such as the Glacier Express and Bernina Express operate, an un- paralleled world record attempt is set to take place on 29 October 2022.

The world’s longest passenger train of 25 railcars will travel along the Albula Line through the internationally renowned spiral tunnels of Preda and Bergün. Companies from Switzerland and Germany – all leading expert partners from the fields of technology, industry, services and tourism are on board for this pioneering Swiss feat.

These images will not only cause a sensation among railway enthusiasts around the  world: when Rhaetian Railway makes an official attempt to operate the world’s longest passenger train on Saturday, 29 October 2022, it will be a record-breaking performance in Swiss public transport.

Like all Rhaetian Railway passenger transport, the train is supplied with sustainable energy from 100% local hydropower. The world’s longest passenger train is made up of 25 compositions of the latest Capricorn type. These will be acquired by Rhaetian Railway by 2024 as part of the largest procurement of rolling stock in its history and will give the Graubünden railway  a major push towards modernisation.

Founded in 1889 between Landquart and Davos, the narrow-gauge railway has operated ever since over a 384-kilometer rail network through Switzerland’s largest canton, which is also the number one holiday destination. The Albula Line, on which the world record attempt is to take place, has been part of Rhaetian Railway since 1903. [traveltext.id]