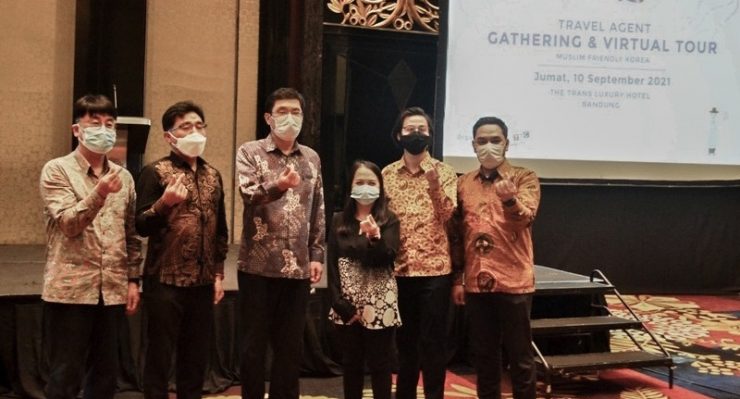 FOR THE second time, the Korea Tourism Organization (KTO) Jakarta recently held a Gathering & Virtual Tour to an Indonesian travel agency. The city of Bandung became the second opportunity after previously being held in Jakarta.

According to Dwita Rizki Nientyas, Marketing Manager of KTO Jakarta, said through this gathering and virtual tour, KTO wants to build a network and friendship between South Korean travel agents and tourism stakeholders in the Bandung area and Indonesia in general.

She explained, South Korea, from year to year has experienced an increasing growth of Muslims, both from natives and immigrants as well as foreigners who live there.

“The increasing growth of Muslims also has an impact on the development of institutions, public service infrastructure and various Muslim-friendly industries known as Muslim Friendly,” said Kiki.

The Gathering and Virtual Tour this time also conveyed the updated condition of the Ginseng Country, although currently Korea is still closing its borders to all foreign tourists including Indonesia as an effort to control the COVID-19 pandemic there.

“But the Korean government continues to carry out the “Our Hearts are Always Open” campaign, which means they will always wait for the arrival of tourists with open arms even though the border conditions are currently closed,” Kiki remarked.

Dwita Rizki Nientyas explained, we from KTO Jakarta socialized that Korea continues to make improvements in accommodating Muslim tourists and hopefully this message can reach our target Muslim tourists.

“The Muslim Friendly Korea campaign has a very significant relationship with Indonesia’s Muslim majority population. Recently, Indonesian tourists are also very critical of asking about Muslim-friendly facilities in Korea. South Korea through the KTO conveyed that the construction of Muslim friendly facilities would continue to be improved, including places of worship in various tourist destinations, various star hotels, shopping centers, airports and others,” she noted.

Dwita Rizki Nientyas added, this is proof of the Korean government’s seriousness in attracting and attracting Muslim tourists from Indonesia, which has proven to be one of the largest tourist sending countries to Korea.

“Korea already has 15 places of worship for Muslims and Muslim women scattered and one Agung Mosque, even non-permanent places of worship already exist in public facilities such as airports, hotels, information central, shopping areas, Tour Spots and others, so that Muslims do not It will be difficult to find a time to worship,” she concluded. [traveltext.id/photo special]