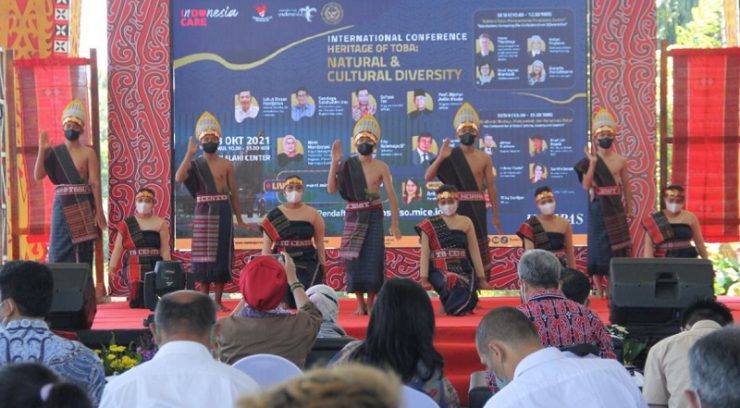 “This theme was chosen based on the extraordinary potential of Lake Toba in its nature and culture,” Tourism and Creative Economy Minister Sandiaga Uno said at the virtual conference here on Wednesday (10/13).

Furthermore, Lake Toba has also been recognized as a Global Geopark by the United Nations Educational, Scientific, and Cultural Organization (UNESCO) to maintain the sustainability of the region, he noted.

“The international conference was organized in Lake Toba to convince stakeholders and unite the vision of collaborating, maintaining, and preserving the world’s assets. The effort is expected to give a positive boost to the economy, environment, and welfare of the community,” he added.

Let’s continue the spirit with 3G, he continued which is to move quickly, move together, and develop all the potential to create jobs. The potential of Lake Toba as a super-priority destination, which is on target, on time, and provides the right benefits.

In June 2021, a similar activity was held in Borobudur, Central Java, he said. The ministry will hold a similar conference in Mandalika, West Nusa Tenggara (NTB) in November 2021, he informed.

Meanwhile, Deputy for Tourism Products and Event Organizer at the ministry Rizki Handayani said the development of MICE (Meeting, Incentive, Convention, Exhibition) activities held outdoors or around Lake Toba was part of the ministry’s innovations.

THE reopening of tourism in Bali for foreign tourists was echoed in Beijing, China. The Indonesian Ambassador to China and Mongolia, Djauhari Oratmangun, invited the invited guests to the Diplomatic Reception of the...

INDONESIAN Minister of Communication and Information, Johnny G. Plate ensured that Indonesia was ready to hold the World Superbike (WSB) in the Special Economic Zone (SEZ) of Mandalika, West Nusa Tenggara by...

PHRI WELCOMES THE RELAXATION OF PPKM IN THE TOURISM SECTOR