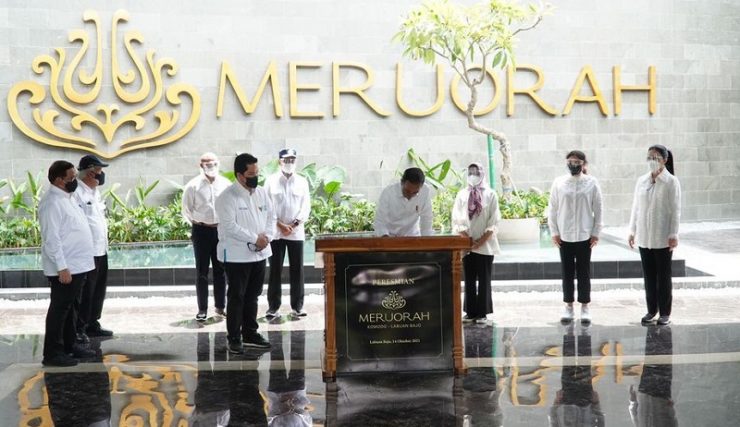 MERUORAH Komodo Labuan Bajo Hotel owned by PT ASDP Indonesia Ferry is ready to support the implementation of the G20 and ASEAN Summit 2023 after being inaugurated by President Joko Widodo. As is known, the hotel is targeted to be one of the supporting tourism ecosystems for the five super priority destinations launched by the government.

According to the President Director of PT ASDP Indonesia Ferry, Ira Puspadewi in a press release, Friday (10/15) said that the Meruorah Komodo Labuan Bajo Hotel, previously named Inaya Bay Komodo, is part of the Labuan Bajo Integrated Area managed by PT Indonesia Ferry Property (Ifpro), which is a joint venture between the company and PT Pembangunan Perumahan. Tbk.

“Currently, Ifpro is building the Labuan Bajo Marina Integrated Area, East Nusa Tenggara which includes a commercial area, five-star hotel, marina, as well as the development of a ferry dock. As hotel owners, we really appreciate this rebranding. We hope that Meruorah’s presence in the city center will become a new attraction in the tourism sector in Labuan Bajo,” said Ira Puspadewi.

She explained, this hotel has become a new icon that presents local culture, as well as being a driving force for the growth of the MICE industry in Labuan Bajo along with the presence of a multifunction hall that is ready for operation.

“Multifunction hall Meruorah is the largest MICE facility in downtown Labuan Bajo with a strategic area and excellent sea views. The capacity of the multifunction hall can accommodate 1000 pax for the implementation of various MICE activities, both small, large, and with international standards. For information, the potential for Indonesian MICE in the international market is very large, considering that Indonesia has complete attractions, both natural, cultural, and artificial, which makes organizing events more interesting,” she remarked.

AIR POLUTION is still the number one environmental health problem, especially in dense cities like Jakarta. Nevertheless, HARRIS Vertu and YELLO Hotels Harmoni do not stop to seek the best solutions and provide added...

THE Ritz-Carlton, part of Marriott Bonvoy’s portfolio of 30 extraordinary hotel brands, today announced the opening of The Ritz-Carlton, Harbin, bringing the brand’s legendary service to northeast...

REDDOORZ declares it is ready to play a role in the recovery of Indonesia’s tourism industry and will double its number of properties in Indonesia by 2022. According to Vice President Operations of RedDroorz...