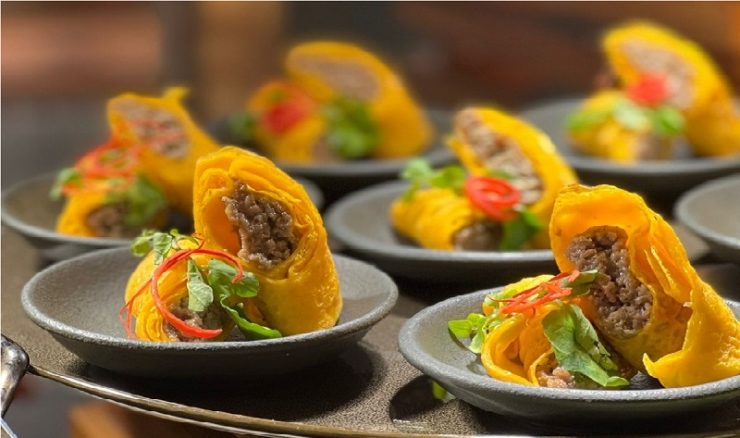 After successfully holding several collaborations with many well-known names, this time the hotel with the title ‘Indonesia Leading 4 Star Hotel 2021’ is partnering with a restaurant from Jakarta, Padamu Negeri Restaurant. Together with the culinary team from Djaman Doeloe Resto & Bar, these two restaurants are ready to serve Indonesian culinary creations for the people of Surabaya.

Padamu Negeri Restaurant, as the name implies, this restaurant serves Indonesian cuisine from Sabang to Merauke that is packaged in a modern way. Together with Djaman Doeloe Resto & Bar at Four Points by Sheraton Surabaya, Pakuwon Indah, they combine the creation of a variety of Indonesian specialties but with an international standard of presentation.

Djaman Doeloe Resto & Bar, which from the beginning had a vision and mission to preserve Indonesian culture through each of its food and beverage creations, continues to activate events such as culinary collaborations with various culinary actors who have unique characteristics or authentic stories that can be told to the people of Surabaya.

“Earlier this year, we chose to collaborate with Padamu Negeri Restaurant, apart from the fact that they are very popular after opening branches in several cities, their style and concept is not much different from ours. The ingredients are all from Indonesia, but packaged in a modern and star hotel standard. Therefore, we invited them and it turned out that they were also very welcoming,” explained Chef Lukman Santoso, Head Chef Djaman Doeloe Resto & Bar, Four Points by Sheraton Surabaya, Pakuwon Indah.

The menu presented in the ‘Restaurant Takeover’ collaboration is in the form of dishes with authentic Indonesian flavors with a few twists in the ingredients or seasonings. Such as Tuna Belly with Tamarind Sauce, Woku Belanga Grouper, Rendang Ball Meat, Duck Suwar Suwir with Kedondong Sauce, to desserts such as Manuk Nom, Arseng, Sago Aren, Podeng Angin and many more.

“This ‘Restaurant Takeover’ will open on January 21-23, 2022, with an all-you-can-eat buffet at Djaman Doeloe Resto & Bar. This weekend, guests can come directly for a buffet dinner on January 21 and 22, then brunch on January 23, at a price of IDR438,000nett/pax and a buy 1 get 1 promo. Of course, this is an opportunity not to be missed, because this also the first time Padamu Negeri has acted in Surabaya,” said Chef Lukman.

Don’t just stop at one weekend. The collaboration between the two restaurants will last for approximately one month, until February 28, 2022, but not with a buffet concept. This collaborative creation can be enjoyed in the form of a la carte and rijsttafel. Rijsttafel itself is a Dutch colonial-style middle-dining concept, which has been implemented and increasingly popularized at Djaman Doeloe Resto & Bar since last year.

“We are constantly trying to provide our guests with new and different culinary experiences that are not only delicious, but have stories to tell. The collaboration with Padamu Negeri this time is very unfortunate to happen on one weekend, and because of the good enthusiastic response, we will continue the collaboration for the next month,” Chef Lukman noted.

He also added that this is a must-try experience, because Padamu Negeri Restaurant itself does not have a restaurant branch in Surabaya. And when else, can you try the menu combined with the Djaman Doeloe Resto & Bar menu? [traveltext.id]