VISIT WHILE DIGGING THE HISTORICAL TRACES OF THE LAWANG SEWU BUILDING 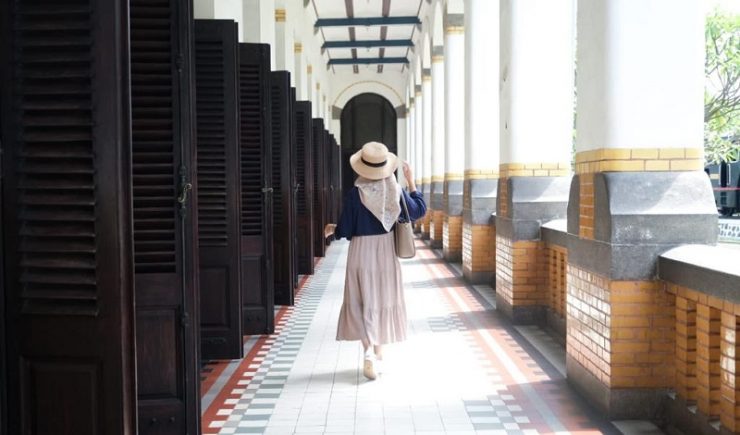 THE LAWANG Sewu Building in Semarang can be one of the right choices for history lovers. Lawang Sewu is a historic building that was built during the Dutch colonial era in the 1900s, a silent witness to the events of the five-day battle that took place in 1945 between the Indonesian Railways Youth Force (AMKA) and the Japanese army.

According to Javanese terms, “lawang” means door, and “sewu” means a thousand or being the word that represents the most numbers in ancient times. So, “Lawang Sewu” means a thousand doors. However, when viewed from the original number, Lawang Sewu has 928 doors. Just lacking 72 doors isn’t it really called sewu?

Located in the heart of Semarang, to be precise on Jl. Pemuda, originally Lawang Sewu was the administrative office of the Dutch railway named Nederlandsch-Indische Spoorweg Maatschappij (NIS). The Lawang Sewu building was built in stages on an area of ​​18,232 m² and was designed by different architects.

According to information from one of the guides, Aris, quoted from the official broadcast of the Ministry of Tourism and Creative Economy, Friday, Lawang Sewu consists of five buildings. The initial design process for Lawang Sewu was started by an architect from the Netherlands, Ir. P. de Rieu. The first building that was built was building C which functioned as a train ticket printing office in 1900.

After Ir. P. de Rieu died, then Prof. J. Klinkhamer and B. J. Oundag were appointed to continue the construction of Lawang Sewu. Work on building A as the main office of the NIS began in February 1904 and was completed in July 1907.

Along with the development of the Dutch railway office, several supporting buildings were built, namely buildings B, D, and E in 1916-1918.

Building B is still being built by Prof. J. Klinkhamer and B. J. Oundag, while buildings D and E were built by architect Thomas Karsten. He became the youngest and last architect to design the construction of the Lawang Sewu Building.

If you look closely, the Lawang Sewu building uses orange ceramic bricks, a symbol of wealth, prosperity, and also indicates the highest caste. In ancient times, these bricks were rare and expensive.

“In the past, one brick was estimated at Rp. 300 thousand. And what’s unique is that the mold is curved,” said Aris.

“And one of the reasons why Lawang Sewu has many doors is not only to make the air circulation better, but also related to caste, they (Dutch people) really maintain their image, so if you wake up, it’s not half-hearted,” he said.

Five Days Battle
After the Dutch colonial period, Lawang Sewu changed hands to become the headquarters of the Japanese army as well as the Japanese transportation office named Riyuku Sokyoku in 1942.

Long story short, in 1945 which was the year of Indonesia’s independence, there was a battle involving AMKA (Raja Youth Force) with Japanese soldiers. This battle lasted for five days non-stop on 15-19 October. One of the causes was the death of dr. Kariadi who was the most reliable doctor at that time.

In terms of numbers and weapons, AMKA youth are considered to have lost. The Japanese soldiers numbered around 500,000 people with bayonet weapons, while AMKA youth only numbered 2000 with pointed bamboo weapons. However, with a tempestuous and unyielding spirit, AMKA youths still tried to fight, even though in the end they had to die on the battlefield.

“The Wilhelminaplein area was once used as a mass grave for AMKA youths who died. However, later the bodies were moved to a more appropriate tomb, namely the Giri Tunggal Tomb, the tomb of the heroes of AMKA fighters,” said Aris.

The government has determined Lawang Sewu as a historic heritage building that needs to be maintained and preserved. The management has implemented health protocols well for tourists who want to visit during the pandemic.

The entrance uses an electronic system so that the flow of visitors to the museum area is more organized. Before entering the museum area, visitors are required to check-in on the PeduliLindung application, then check body temperature, and wash their hands, and don’t forget to always wear a mask.

The ticket price for adults is IDR 20,000 and for children IDR 10,000. Lawang Sewu is open from 08:00 – 17:00 WIB. The existence of Lawang Sewu provides opportunities for local communities to increase their economic income. Because Lawang Sewu is the main attraction or magnet for tourists to visit the city of Semarang.

Even Indonesia’s Ministry of Tourism and Creative Economy explained that the tourism sector creates a positive impact on other industries, such as transportation, hotels and restaurants. The higher the frequency of tourist visits to Lawang Sewu, the business opportunities and job creation will be more open, thus having an impact on the welfare of the community.

A number of policy relaxations by the government, such as the abolition of antigen testing for domestic travelers, are expected to have a significant impact on increasing tourist visits to Lawang Sewu. With programs and policies that are right on target, have the right benefits, and at the right time, the government understands the needs of the people, then economic prosperity can increase. [antaranews/photo special]