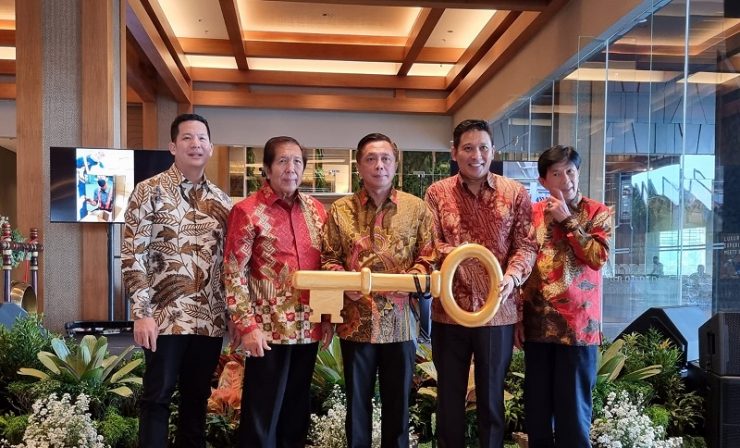 GRAND Dafam Signature International Airport Yogyakarta (GDSIAY) with 4+ star standard which is right in front of the entrance of Yogyakarta International airport with the concept of luxury hotel with international standard, has 198 rooms and is equipped with exclusive facilities such as swimming pool, lounge and club lounge.

According to Andhy Irawan MBA, CEO of DHM in a press conference in Kulon Progo, Wednesday (6/15) said GDSIAY as the first international star hotel in Kulon Progo, Yogyakarta, which is operated by DHM with a 4-star plus (Signature) category, officially conducted a “Trial Opening” today (6/15) designed dynamically with modern architecture that synergizes with local wisdom in meeting consumer needs for business and commercial purposes holiday.

“The reason for conducting the “Trial Opening” in June is the right time because the community’s economy is considered to have improved. This is reflected in the increasing occupancy rate of hotels under DHM. It is noted that currently the average consolidated occupancy rate of Hotel Dafam is around 50-60%,” he said.

Andhy added, the current condition of hospitality is enough to provide a breath of fresh air. There is an increase in the occupancy rate of Dafam hotels throughout Indonesia.

“However, I also cannot deny that with the presence of Grand Dafam Signature International Airport Yogyakarta in Kulon Progo, we (DHM and PT. Surabaya Lighthouse Indonesia) see it as a very good and interesting business potential. It is hoped that it can be an important part in increasing sustainable economic growth by continuing to innovate while maintaining local wisdom as an attraction and selling point for destinations in Kulon Progo Regency,” Andhy underlined.

Meanwhile, when asked about GDSIAY’s investment, Herry Gunawan as the President Director of PT. Surabaya Mercusuar Indonesia then directly answered for Grand Dafam Signature International Airport Yogyakarta the total value of the project is over IDR200 billion with a break event point of less than 10 years.

“But of course we didn’t spend that much on all the hotel rooms, only certain rooms such as Suites rooms equipped with balconies, but we are more concerned with interior detailing of public spaces such as restaurants, lobbies and outdoor spaces, fitness centers, ballroom, meeting rooms and other special facilities,” Herry Gunawan remarked.

Meanwhile, Hengky Tambayong, General Manager of GDSIAY, said that this new hotel provides a comfortable atmosphere in creating a luxurious experience that fits the lifestyle, which is important in providing services to consumers.

“Located right across from Yogyakarta International Airport; has 197 modern rooms equipped with restaurant facilities, fitness center, ballroom, meeting rooms and other special facilities. However, until now we have only opened 70 rooms, of which this October, all of our rooms are ready to operate,” he said.

He explained that the MICE facilities (our ballroom and meeting) will operate in October 2022 and the targets we are aiming for are local governments, institutions, individuals (weddings, socialites, etc.).

“What is the pride of our hotel is the Signature Lounge, d’View with views of the surrounding Menoreh hills connected to the Previere Lounge and Bar which is located on the rooftop on the 10th floor, providing a special view and we present “Willow SPA” which can provide relaxation from the busy schedule. your daily activities to keep your body in prime condition,” he added.

He concluded that whether guests are visiting for work or fun, the hotel is sure to cater to the needs of today’s everyday traveler with its approachable design, stylish comfort and all of the brand’s popular extras. [traveltext.id]