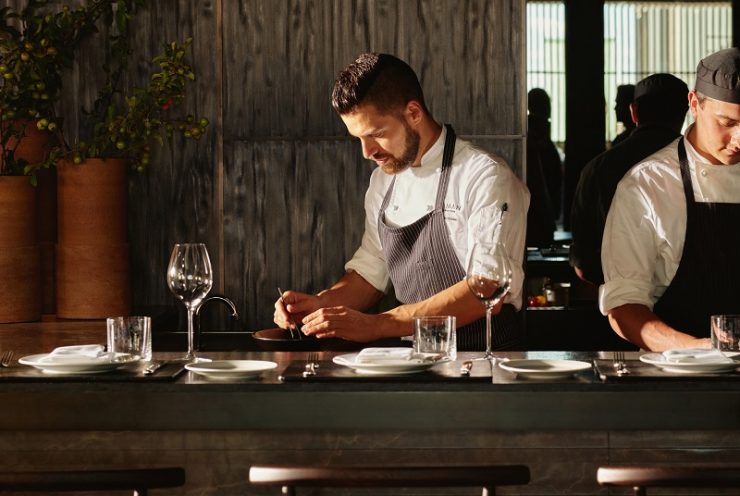 AMAN New York has launched signature Aman restaurants Arva and Nama – the first of their kind in North America. The cornerstones of a culinary concept introducing Aman’s exceptional source-origin, sensorially transporting cuisine to New York, these two restaurants are the finishing touches to the iconic Crown Building’s exceptional transformation.

Rising from the corner of 57th Street and Fifth Avenue since 1921, the Crown Building with its eponymous golden finial, is the latest in a long line of epochal design collaborations between the Aman brand and Jean-Michel Gathy of Denniston Architects.

Years of sensitive restoration and groundbreaking innovation have culminated in Aman New York’s 83 hotel suites, 22 branded residences, and 25,000-square-foot (2,300-square-metre) Aman Spa bringing the peace promised by Aman’s Sanskrit-derived name to the heart of Manhattan. Yet like Aman Tokyo, the first of Aman’s metropolitan destinations, Aman New York is a quintessentially urban sanctuary – simultaneously an escape and a gathering place.

This apparent paradox finds its fullest expression on the 14th floor of Aman New York, where the tranquility of Aman’s rarefied atmosphere is compellingly charged with the city’s cosmopolitan energy. Set between the breathtaking, double- height atrium and wraparound terraces, the result is a collection of uniquely enthralling, convivial spaces designed to offer unprecedented dining and soul igniting social connection.

Extending the Crown Building’s 57th Street and Fifth Avenue facades, the 7,000-square-foot (650-square-metre) Garden Terrace is also shared by the members-only Aman Club and most expansively, by Arva, through the ingenious delineation of spaces by striking, fire-centered, water features and lush landscaping. Nama claims its own immersive city views from a separate terrace overlooking 56th Street.

Aman New York’s exceptional food and beverage team is helmed by Executive Chef Freddy Vargas, a legendary name in gastronomic circles since his Zagat-lauded days with Scott Conant at Scarpetta, and most recently the Executive Chef of Natirar Resort, New Jersey.

Under the direction of Chef de Cuisine Dario Ossola, these ingredients are then transformed by the simple alchemy of the kitchen into uncomplicated, heart-warming dishes, made for sharing with family and friends. Changing with the seasons to showcase the freshest seasonal produce, Arva’s menus reveal Chef Dario Ossola’s culinary creativity honed most recently as Executive Chef of Aman Venice in his native Italy.

There he worked closely with three-Michelin starred Chef Norbert Niederkofler, whose pioneering work in sustainable gastronomy will continue to influence Arva at Aman New York. Niederkofler and other renowned chefs including Aman Tokyo’s Chef Musashi Hiroyuki will participate in the hotel’s regular series of gourmet pop-ups at both Arva and Nama, ensuring a continually evolving calendar of special events. [sources/photo special]