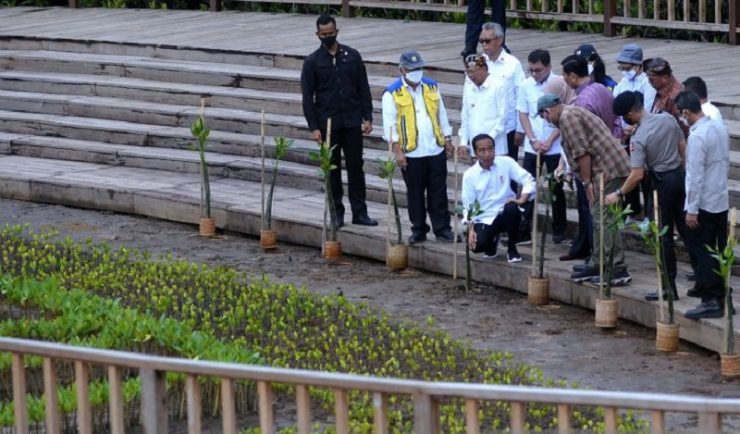 PRESIDENT Joko Widodo (Jokowi) visited the Ngurah Rai Mangrove Forest Park (Tahura) area, Denpasar, Bali which is being reorganized. The place will be the location that the G20 Summit participants will visit in November 2022.

“I see that everything is almost ready, thank God. We hope that the high-level conference (KTT) will also run well and smoothly,” said Jokowi at the Ngurah Rai Mangrove Forest, Denpasar, Bali, Thursday (10/6).

Jokowi admitted that he was surprised by the arrangement of the Mangrove Tahura area. In fact, the 7.23-hectare land is equipped with a mangrove nursery area.

“Later, this place will be the main point (in the visit of the G20 participants),” explained the President.

The Mangrove Forest, said Jokowi, is a form of the Indonesian government’s concern for the environment. Especially, in reforestation of mangroves and tropical rain forests.

“So that the leaders we invite here can see firsthand (a form of concern for the environment),” said Jokowi.

During the visit, Jokowi was accompanied by Coordinating Minister for Maritime Affairs and Investment (Menko Marves) Luhut Binsar Pandjaitan, Minister of Public Works and Public Housing (PUPR) Basuki Hadimuljono, Minister of Foreign Affairs (Menlu) Retno Marsudi, Governor of Bali I Wayan Koster, team coordinator assistance and partnerships in the national committee structure of the G20 Presidency, Wishnutama Kusubandio, and others.

The low-intensity rain that flushed the Ngurah Rai Mangrove Forest did not dampen Jokowi and his team from continuing to review. In fact, occasionally Jokowi had given instructions to his staff. [antaranews]

ONLINE travel agent, tokopedia said that transactions for travel activities in the service recorded an increase of up to 3.5 times ahead of the year-end holiday period. This can be seen from the level of booking travel...

THE NUMBER of foreign tourists coming to Japan increased to nearly 500,000 in October 2022, the first month the country has fully reopened its borders. That figure has more than doubled compared to September. On October...

IT IS hoped that it will be able to increase tourist visits and provide quality health tourism options, so as to accelerate economic revival, the Island of the Gods, Bali will be prepared and developed as a leading...