7 TRADITIONAL VILLAGES MUST BE VISITED WHEN TRAVELLING TO LOMBOK 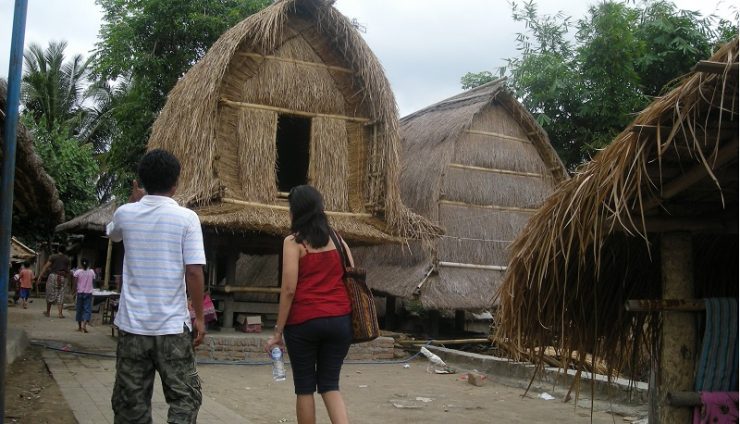 DISCUSSING Lombok tourism seems endless. Not only because of the beautiful nature of Lombok Island. Community life that upholds traditional and cultural values is the main attraction for Lombok tourism.

Travelers who come to enjoy Lombok tourism are not only presented with beaches and waterfalls, but also cultural traditions that are still upheld. The people of Lombok who are known to be religious still maintain their cultural values. This can be seen from the traditional villages or traditional villages in several areas on the island of Lombok.

Almost every day foreign and local tourists come to visit Sade Village. Sade Village is famous because the people who live in this village still maintain the shape of the traditional Sasak community houses. Not only houses, traditions and customs, even clothes are still thick with the old Sasak Tempu nuances. If people want to see the life of the Sasak people in ancient times, then just come to Sade Village.

The route to Sade Village is very easy. If coming from Mataram City, it only takes about 1 hour more via the Mataram-Lombok Airport bypass route. From the Lombok Airport roundabout, take the old route towards Kuta Mandalika. About 15 minutes or 11 kilometers from Lombok Airport, you will arrive at Lombok Airport.

The direction is still one way to the Mandalika Circuit, so Sade Village is a must-visit destination during MotoGP or WSBK events. The road to Sade Village is very good, so it can be reached by motorbike or car. Sade Village facilities are also very complete, several minimarkets are also available outside the traditional village. Residents who live in Sade Village depend on farming and tourists who shop there.

Residents of Sade Village sell various crafts and weaving as souvenirs for visitors. Prices for their products vary. Starting from souvenirs costing IDR15,000 to woven fabrics costing millions of IDR, depending on the type of product.

Ende Traditional Village can be a choice of destination when watching the MotoGP event at the Mandalika Circuit. This village is right on the old route from Lombok Airport to the Mandalika area, not the Airport-Mandalika bypass road.

Visitors can use motorbikes or rent a travel car to be delivered here. It’s quite close to the Mandalika Circuit. With a traditional feel, this village offers many unique things about the life of the ancient Sasak people. This traditional Sasak village has 30 traditional houses lined up facing east.

There are at least 150 residents living in this Ende traditional tourist village. One of the advantages of this village is that its inhabitants still maintain the values of the customs and culture of their ancestors. Among them are traditional Sasak houses which they call “bale tani”. Bale tani has a lot of uniqueness and has its own meaning for the Sasak people in Ende. The roof is made of thatch grass.

According to Samiun, the manager of the Ende traditional tourism village, the Sasak Ende people use thatch grass to make it cooler when occupied. Even though the weather is hot, the air temperature is not too hot. The thatched roof acts as a filter for incoming and outgoing air. Another uniqueness of this bale tani is the door which tends to be shorter than the house in general. Bale Tani entrance is about 140 centimeters.

Samiun said that if the entrance is made short, it has its own function as well. When we visit a guest’s house, they must respect and greet the residents of the house. Because of that, the bale tani door was shortened in function to appreciate and respect the owner of the house.

Samiun said that if the entrance is made short, it has its own function as well. When we visit a guest’s house, they must respect and greet the residents of the house. Because of that, the bale tani door was shortened in function to appreciate and respect the owner of the house.

Because the door is short, visitors will automatically duck and that means we prioritize courtesy to them. Not only that, the floor of this bale is also smeared with cow dung to strengthen the bond between the floors of the house.

Smearing the floor of a traditional house with cow dung is a tradition that has existed since our ancestors and is still being preserved today. The cow manure taken is the cow manure that has just come out of the mammal. Next, add a little water to make it slightly liquefied. Only then the entire floor area of the house is smeared with the dirt by hand.

Apart from bale tani, this traditional village also has other arts that can be displayed during visits. Among them are the arts and traditions of Peresean, Nyensek, and Gendang Beleq. After walking around seeing the uniqueness of this village, visitors can buy various types of typical Lombok souvenirs. Starting from woven fabrics, songket fabrics, sarongs, Lombok t-shirts, bracelets, necklaces, pearls and so on.

Administratively, Bayan Traditional Village has an area of around 2,600 hectares and is one of 9 villages in Bayan District, North Lombok Regency. The population of Bayan Village reaches 5,373 people, most of whom work as farmers.

Indigenous peoples in Bayan Village not only maintain the shape of the old Sasak house buildings, they also still maintain their traditions and customs to this day. In this village there is also the Bayan Beleq Mosque, a 300 year old cultural heritage. The Bayan Beleq Mosque is a silent witness to the entry of Islamic teachings on the island of Lombok.

This law is in accordance with the concept of sustainable development. This concept is applied by the people of Bayan Traditional Village by protecting the upstream and downstream of the river, while upholding the independence of local values.

Route to Bayan Village
For visitors who want to take a walk to the Bayan Traditional Village, they can choose two routes. If departing from Mataram City, you can use the Mataram-Pusuk Pas-Pemenang-Bayan route. This route is faster, visitors can save travel time. It’s just that you have to go through the uphill and winding path at Pusuk Pas.

If you take this route, visitors can also enjoy the feel of the forest in the Pusuk Pas area. The second route can be via the Mataram-Senggigi-Pemenang-Bayan route. This path offers natural scenery in the form of a row of exotic beaches.

It’s just that the travel time can be longer and you have to conquer some sharp inclines in Senggigi-Penang. The travel time from Mataram to Bayan is on average more than 1 hour using two-wheeled or four-wheeled vehicles.

Access to Bayan Village is good enough to make it easier for visitors. It is recommended to use a private vehicle or rent a vehicle. Because it is very rare for public transportation to go to the Bayan Traditional Village.

These female tour guides are rarely owned by other traditional villages in Lombok, even in Indonesia. Moreover, female guides are still considered taboo for some indigenous peoples.

Path to Senaru
Senaru Traditional Village, which is at the foot of Mount Rinjani, is about 93.8 kilometers from Mataram City and takes 2 hours 18 minutes. To get to this village, you can go through the Mataram-Senggigi-Pemenang-Senaru route.

You can also take an alternative route from Mataram-Pusuk Pas-Pemenang-Senaru. Apart from traditional villages, various natural beauties can be enjoyed at Senaru. Like the Sendang Gila waterfall, the Tiu Kelep waterfall with views of the forest that are still beautiful. In this area there are also many inns and tourist facilities that can be enjoyed by tourists.

Their houses still retain the traditional building forms of the Sasak people of Lombok. Their houses are still made of simple natural materials but the villages are neatly arranged.

The route to Segenter Traditional Village is faster if you take the route from the west coast of Lombok Island, with a distance of about 90 kilometers from Mataram City. It is recommended to use a private vehicle, you can take the Mataram-Senggigi-Pemenang-Tanjung-Selengen-Segenter route.

Therefore, traveling to Sembalun will not be complete without visiting Beleq Village. Within the Beleq Village complex there are 7 units of traditional houses, 2 blocks for storing property, 1 bale malang or langgar for meetings and worship.

Then there is a magical stone called pasek gumi, near the pasek gumi there is a delpak stone which functions as a guardian/pengulu vehicle. The shape of this house is the same as other traditional Lomok villages, the walls are made of woven bamboo and thatched roofs.

Then the floor is made of clay mixed with cow dung and straw ash. From the traditional houses of Beleq Village, visitors can see firsthand the natural beauty of the hills and rice field landscapes in the Sembalun area.

So that the Mangku (traditional elder) said that the traditional house in the Sasak tribe has a connection. But it is not yet known how the exact history. The house in the Limbungan Traditional Village was built in mutual cooperation by the local people. So that all of the materials and shapes are the same.

Placement is also close together, this has the meaning of harmony and togetherness. This shows that the inhabitants have the same equality. This is evident from the proximity of each house that was made. It can also be seen from their average occupation of farming and raising livestock. Even in terms of appearance have a resemblance.

The foundation is made of stone and soil. The floor is a mixture of earth, cow dung and wood sap. The framework of the building is made of forest wood, the fence is made of woven bamboo. The roof is made of dry reeds tied with bamboo ropes. The door consists of two doors, one on the outside.

While the other door on the inside of the house. To note, the inner room is higher than the outside. Uniquely the Limbungan Traditional House, the door is made like a gate, which is opened by sliding it, with a height of less than 1 meter. So that anyone who enters the house must bow his head.

This shows that anyone who is going to visit must bow down to respect the owner of the house. On the roof, there are like two horns. Likened to a wife who must submit to her husband. This traditional house has no windows, because of the cold hills.

Its position in the hills causes anyone who wants to stay the night to wear a jacket. Even during the day, it’s cold inside the traditional house. Because the floor is made of dirt makes it colder. The Limbungan Traditional House can be one of the tourist attractions of East Lombok.

The following is the route to the Limbungan Traditional House. If coming from the city of Mataram, tribunners can go through the Mataram-East Lombok highway. Then drive towards West Lombok – Central Lombok – East Lombok following the provincial road. When you arrive at the Aik Mel intersection, turn right, after that you will pass through Wanasaba District.

The journey takes about 2 hours 18 minutes using four wheels. If you use public transportation, the fare is IDR50,000. If you use two wheels, it takes 2 hours 4 minutes to spend 1.5 liters of gasoline. [sources/photo special]

COVID-19 protocols around the world have started to relax. The pandemic seems to be getting closer to becoming endemic. Many people have more freely implemented the new normal. They may begin to realize their holiday...

WHEN TOURIST destinations start to open in 2023, and implementation of restrictions on community activities (PPKM) easing has also been opened, then it’s time for you to have a vacation. There are many places in...