SANDIAGA: I BELIEVE THAT CREATIVE ECONOMY CAN BE THE LOCOMOTIVE OF DEV’T 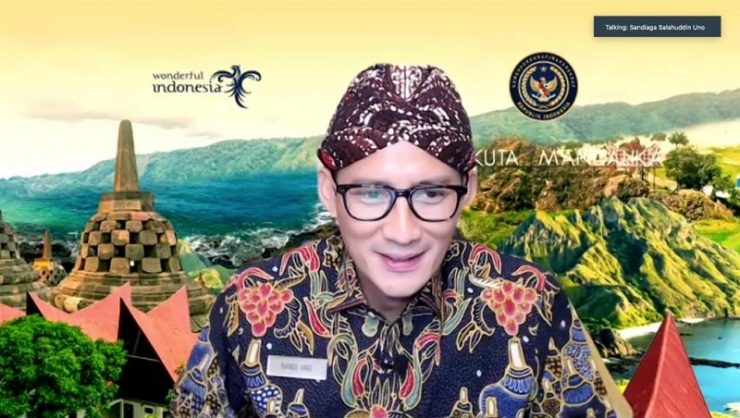 INDONESIA’S Minister of Tourism and Creative Economy, Sandiaga Uno, believes that the creative economy sector is able to become a development locomotive through synergies between artisans or Micro Small and Medium Enterprises (MSMEs), so that they can make a greater contribution to gross domestic product (GDP), especially from the tax sector.

This was conveyed by Sandiaga, when he was a keynote speaker, in the webinar “Socialization of Taxes and SMEs at the Tax Fair 2021, online, in Jakarta, Wednesday (7/14).

“MSME players are the main pillars in the nation’s economic growth, because they contribute 60% to the national economy, and the tax sector contributes around 85% to financing the economy in Indonesia. Therefore, I believe that if there is a synergy between MSME actors and taxation, the creative economy sector will be able to become the locomotive of national development,” he said.

This is based on Statistical Data on Macro Tourism and Creative Economy Indicators, which shows the contribution of the creative economy sector to the national economy continues to increase from IDR526 trillion in 2010 to IDR989 trillion in 2017. Meanwhile, in 2019, the creative economy sector contributed of IDR1.105 trillion of Indonesia’s Gross Domestic Product (GDP). This puts Indonesia in third position, after the United States and South Korea.

Although the COVID-19 pandemic has made GDP ADHK (used to measure economic growth over time) the creative economy in 2020 has grown by minus 2.39%. However, sub-sectors such as television, radio, applications and game developers, actually experienced an increase.

“This is an opportunity for MSME actors to present creative products with digital transformation. But don’t be afraid to be taxed, because the old paradigm that taxes are something scary has been destroyed, this tax in the future will be our best friend in building the nation. So, we must be able to recognize how we can make a real contribution,” he underlined.

Then, Sandiaga explained that the reallocation of the government’s budget in dealing with COVID-19 for MSME players in 2020 was IDR123.46 trillion. MSME playes get a fairly large portion, because the government realizes how important and strategic MSMEs are as a driver of the national economy. In addition, one of the National Economic Income (PEN) programs provided for MSME playes is tax relaxation and other government incentive assistance.

Sandiaga continued that I believe that if there are obstacles that we face related to financing, production space, liquidity, and health protocols we can overcome, the key is that MSMEs must be able to innovate, adapt, and collaborate.

On that occasion, Sandiaga told of his business journey that was selling well in times of crisis. More than 20 years ago, he lost his job, because he was laid off during the 1997 crisis. But during the crisis, I had the opportunity to start a small business in the financial sector, together with his two friends.

“Thanks to God, after more than 20 years, our business is now a stable business and has created jobs for 30,000 employees in Indonesia,” he stated.

“Now that I am serving in the Tourism Ministry, I want to share this inspiration with the whole community. Use the concept of selling well in business during a crisis. Let’s join hands, I believe that with MSMEs advancing, taxes will increase, with taxes increasing, we will be able to move the economy, create jobs and hopefully rise in difficult times, win against COVID-19, together taxes MSMEs yes we can do it,” he concluded. [traveltext.id]