RATU BOKO TEMPLE IS ONE OF THE TOURIST MAGNETS IN YOGYAKARTA 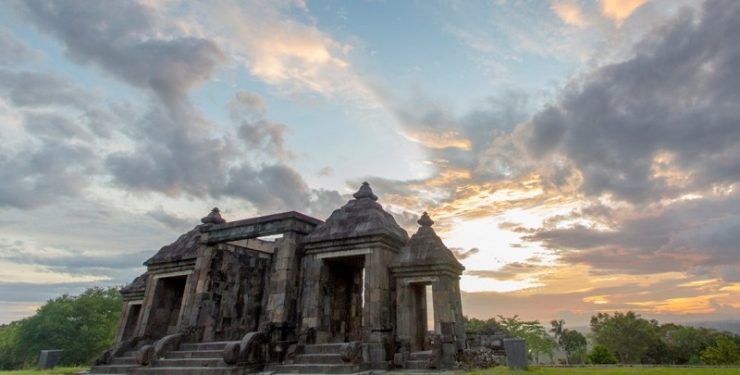 THE NAME of Ratu Boko Temple had become a byword in 2016, when it became one of the filming locations. It must be admitted, Ratu Boko has indeed become one of the tourist magnets in Yogyakarta. Two gates and the remains of the royal ruins in the past, are the main attraction.

But long before that, the existence of the temple was full of legends about Ratu Boko and Bandung Bondowoso. Some say that Ratu Boko is an evil giant and lives in the palace hall. Because he is evil, he often eats humans until he is finally defeated by Bandung Bondowoso, who is none other than a knight.

After the collapse, in a study conducted by the Dutch archaeologist, N.J. Krom finds an inscription bearing the name Nagari used by the Sailendra family, or the existence of Ratu Boko’s kingdom in the past. However, many also doubt its existence.

One of the doubts of the Queen Boko Kingdom civilization in the past, because the bedrock material of this plain is limestone. Where limestone has a porous character so that water can not last long.

In the 1950s, the people living around the site were farmers and had problems with water supply. In fact, if there used to be a kingdom, it is clear that water is the main source of livelihood. Also, this place must accommodate hundreds of people living.

However, there is another plausible possibility, namely the assumption that Ratu Boko’s location is part of a vast palace complex. Royal activities can be carried out in the lowlands, while the plains above are used for special rituals of the royal family.

In the 19th century, visitors who came from Europe also tended to accept the explanation that Ratu Boko was just a legend. However, the professional archaeologists who came to this place, such as Brandes in 1903, Bosch in 1918, Stutterheim who came in 1926, and Krom who came in 1931, supported the idea that the mainland served as a center of religious activity.

There is also an archaeologist, Bernet Kempers, who assumes that Ratu Boko is part of the palace gardens. This is in line with the concept of a Javanese royal garden where there are bathing facilities, religious activities such as meditation in caves, and high walls that may have been used for fortifications, although they had no intention of doing so.

For all of the above three arguments, the area in the Ratu Boko complex is indeed suitable for the kingdom, for example religious activities including meditation and bathing. Apart from all that, Ratu Boko has indeed become one of the favorite tourist destinations when visiting Jogja. [sources/photo special]

MERATUS Mountains in South Kalimantan can currently be placed on the list of to-visit destinations for tourists not looking to tread the beaten path of the typical must-see sights. Tourists on the look out for...

NATURAL phenomena are often found in the dry season. When the air temperature reaches its lowest point, in some locations the area which is at a high enough altitude is often found by tourists. One of the highland...

THE COMBINATION of the warmth of the residents and the coldness of nature in the Bromo, Tengger, Semeru areas beautifies the natural and cultural beauty of the national park. The cool city of Malang has terrorized our...