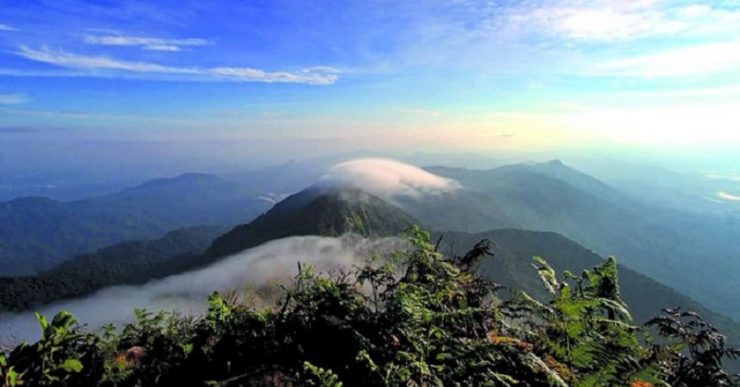 MERATUS Mountains in South Kalimantan can currently be placed on the list of to-visit destinations for tourists not looking to tread the beaten path of the typical must-see sights.

Tourists on the look out for unconventional destinations can engage in interactions with the indigenous people of Dayak Meratus and witness up-close their rituals, soak in the beauty of the waterfalls and the scenic Meratus Mountains from the Halau Halau Peak.

Meratus Mountains, situated 1,901 meters above sea level and viewed by many as mystical mountains, is home to the indigenous people of South Kalimantan, the Dayak Meratus tribe.

The Hulu Sungai Tengah District of South Kalimantan Province has prepared a tour package in collaboration with the Dayak Meratus tribe in Balai Kiyu Kampong of Hinas Kiri Village that will blend the beauty of nature and culture.

“We will design a tour package that combines the nature and culture. We also have waterfalls and the Halau Halau Peak,” Wahyudin, head of the district’s Youth, Sports and Tourism Office, stated.

Visitors can spend their nights in local houses and witness the daily life of the Dayaks steeped in local wisdom. The Dayak Meratus tribe has gained popularity for its perseverance to preserve its customs handed down from their ancestors for the subsequent generations.

However, they are relatively open to modern life and will warmly welcome guests interested in observing their rituals. Those looking to go on a more challenging trip can join the group to scale the Halau Halau peak, or what the locals call Mount Besar (big mountain), the highest peak of Meratus Mountains.

Wahyudin confirmed that the government will involve the local people to help in materializing the plan. The local government’s tour will be a specialized one, as it is rather challenging to reach the kampong that is home to 24 families and is located at the foot of Meratus Mountains.

It takes some 1.5 hours to reach the village located 40 kilometers from the district’s capital of Barabai. Visitors are required to be careful in passing an uphill, narrow, and winding village road.

Wahyudin admitted that the lack of infrastructure has emerged as the key hindrance to the area’s tourism development.

“This is a specialized tour, only for those who really have interest. It is because it is not easy to reach the location,” he explained.

Syahdi, a villager, gave his thumbs-up to the plan, and the Dayaks in the village will provide a house for visitors.

“We, the villagers in Balai Kiyu, will provide a house for visitors. They do not have to stay in a villager’s house, but we will prepare a special house for climbers or visitors to stay during the nights,” Syahdi stated.

Halau Halau Peak is the highest peak of Meratus Mountains, generally known among local and foreign climbers. Many foreign climbers have reached the peak, including those from Russia, Japan, and Spain.

It takes no less than three days and two nights to reach the peak and back to the basecamp in Balai Kiyu, while it takes two days to climb and reach the peak and a day to return to Balai. The Dayak Meratus tribe considers Halau Halau as a sacred mountain that protects them from evil.

“In ancient times, the Dayak ancestors meditated on the mountain. Halau Halau has become a protector for the community,” he stated.

He further added that visitors are also banned from taking any plants from the mountain, littering, shouting, and engaging in indecent talks. It is also a taboo for visitors to climb the mountain when villagers are still conducting rituals.

The province will apply for the UNESCO Global Geoparks (UGGp) status and has sought the Tourism Ministry’s support.

Responding to the request, Tourism Minister Arief Yahya confirmed the ministry’s support to the South Kalimantan provincial government’s endeavors to apply for the UGGp status to facilitate broader international exposure.

Once the UGGp status is attained, Meratus Mountains can also be developed further to become one of the well-known tourist sites, and more tourism products can also be promoted at the global level, Yahya remarked.

“South Kalimantan has a huge tourism potential owing to its diverse natural and cultural heritage in the form of the Barito River, Bekantan (proboscis monkey endemic to Kalimantan), and foods. Please pick the most favorable one,” he noted.

The government is keen to choose Meratus Mountains based on its most favorable tourism potential for South Kalimantan to make the province one of the global tourist destinations, he remarked, adding that a meeting was held to discuss this matter.

“We feel that a tourist site can become a global tourism destination if we select it accurately. I had also resided here and fell in love with Meratus Mountains. When I travel by land, I am used to making a stopover at Meratus to enjoy the scenery,” he revealed. [antaranews/photo special]

NEW ZEALAND is not a cheap holiday destination. But you must once set foot in this beautiful country. Traveling in New Zealand is quite expensive. A realistic daily cost of living for New Zealand is 100 euros per person...

FROM NATURE TO CULTURE OFFERED DURING A VISIT TO YOBOI VILLAGE, PAPUA

YOBOI VILLAGE is a tourist village with complete charm in Jayapura, Papua. Starting from natural beauty, cultural arts, to educational tours. This variety of potential makes this tourist village in the middle of Lake...

WANT TO VACATION IN RAJA AMPAT PAPUA, HOW MUCH DO YOU NEED WHILE THERE?

RAJA AMPAT is one of the recommendations as a tourist place that is included in your vacation list. However, try to travel with colleagues or friends so that the cost is more affordable. Such as lodging or rental for...