ROAD TO MOTOGP 2022: MANDALIKA CIRCUIT IS READY TO BE THE NEW PRIMADONNA 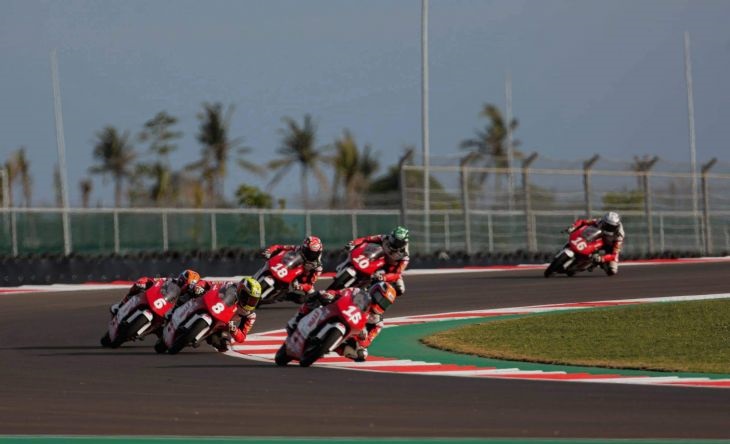 THE PERTAMINA Mandalika Circuit has become one of the prima donnas of the racing world once the track on the southern coast of the island of Lombok, West Nusa Tenggara, prepares itself to host the 2022 MotoGP.

The 4.3-kilometers track and 17-corners will also be the first road circuit to enter the MotoGP calendar after Dorna Sports announced a provisional schedule for next year’s racing season.

In addition to being awarded a slot on March 20 to hold the Indonesian Grand Prix, the Pertamina Mandalika Circuit has the honor of welcoming teams and riders early to Lombok when they conduct a pre-season test on February 11-13. This news answers the enthusiasm and anxiety of the Indonesian public, which is one of the countries that has the largest MotoGP fan base in the world.

Indonesia previously had ambitions to hold the MotoGP Grand Prix last October, but was forced to postpone it due to the COVID-19 pandemic and the unfinished construction of the circuit, although officials on the field said the track construction progress was “on track”.

Then a few months later, as a gift for Indonesia’s Independence Day, the Mandalika Grand Prix Association (MGPA) reported that the process of paving the Mandalika Circuit track had been completed 100 percent and Indonesia was increasingly confident towards MotoGP 2022.

“This gives confidence that ‘Road to MotoGP’ is on track,” said MGPA President Director Ricky Baheramsjah.

Test events
However, before Marc Marquez and Fabio Quartararo and others arrive, the Mandalika Circuit must be ready to become the venue for two international races, namely the Asia Talent Cup and the final World Superbike series in November.

Within a period of three months after the completion of the asphalt track, the ITDC developer accelerated the construction of racing support facilities such as pit buildings, race control, observation decks, spectator stands, medical facilities, and painting the curbs on the main track of the circuit.

The painting of the curbs, which function as markings, uses special tools and paints from Germany and is carried out by a specialist Race Track company, Roadgrip from England, through their subsidiary Roadgrip Motorsport Indonesia (RMI) which assigns specialists with experience working on a number of world circuits such as Austin, Zandvoort and Yas Marina.

The 350-meter-long Pit Building with a capacity of 50 garages is built in a modular system consisting of three floors.

The ground floor is the garage used by the racers and team technicians, while the second floor is the VVIP stands and media center. While the third floor of the Pit Building is specifically for other supporting facilities.

Medical Center facilities in this circuit have also been equipped, including a helipad. The medical personnel have undergone six days of training to support medical needs in the circuit area including medical evacuation procedures via helicopter, intervention car, ambulance, ground post, and pit lane ground post as a simulation if an accident occurs to a rider in accordance with the specified SOP. .

All the completeness of this circuit is a requirement for the Mandalika Circuit to pass the FIM final homologation. And until the first week of November, MGPA stated that the Pertamina Mandalika Circuit had reached 98% readiness to hold two international racing events this month.

“Looking at the completeness of the facilities and the quality of this circuit, we are optimistic that we can pass the homologation process by the Federation Internationale de motorcyclisme (FIM),” said Ricky.

The Lombok International Airport runway has also been extended to accommodate large-bodied aircraft. Then the Mandalika bypass road has also been completed so that it can cut the travel time from the airport to the circuit to just 15 minutes.

Indonesia’s momentum to become a big player in the racing world is getting stronger when President Joko Widodo inaugurated the Pertamina Mandalika Circuit ahead of the Asia Talent Cup tournament being held.

President Jokowi, who also likes to ride a big motorbike, even tried out the track riding a modified green Kawasaki W175 motorbike.

Unfortunately, a few weeks before the WSBK was held, news emerged stating that the logistics of the Ducati team that had arrived at the Mandalika Circuit had been opened by irresponsible individuals, although the MGPA finally clarified that the procedure was in accordance with customs clearence provisions for the purpose of importing goods.

Then, the committee was also forced to postpone the implementation of the third ATC series for one week due to the lack of marshal personnel on the circuit.

Boost Lombok’s economy
Built in the Mandalika Special Economic Zone and surrounded by hills and the southern coast of Lombok, the Pertamina Mandalika Circuit can stimulate the world of automotive sports and the local economy.

“The big events every year at the Mandalika Circuit, we hope to bring up new economic points in NTB,” said Jokowi after the inauguration of the circuit.

The excitement of MotoGP was also felt by Mulyadi, a small and medium business actor in the East Lombok region.

The man who works in the Lombok handicraft center, along with his fellow craftsmen, felt the impact of the global health crisis on their business.

“We are really sluggish, confused about where to market it,” said Mulyadi.

“Honestly, I was surprised that Lombok could also be world class,” said Mulyadi at the Lombok Mulya Craft craft gallery.

“Hopefully, with this MotoGP, we as tourism actors in the SME sector can be more enthusiastic. The advantages of Mandalika, which is surrounded by beautiful white sandy beaches, cannot be found in other world racing circuits.”

Even world champion Mick Doohan joked that it would be very difficult for the riders to tell the difference between a race or a holiday when they arrived at the Mandalika Circuit.

“I’m afraid that riders won’t be able to distinguish between racing and vacation. Because the concept of the Mandalika circuit can be called a race tour, so here riders, spectators and all those involved in the Mandalika MotoGP can enjoy the atmosphere of the circuit concept that is attached to this beach, “said Doohan.

Dohaan explained that the five-time world champion in the 500cc era also considers the Mandalika Circuit challenging because it has the characteristics of a fast circuit. Changes occur very quickly from one point to another. This means, it will be a very tight race. The winner will be determined on the last lap. Very interesting.

Heritage and branding
Judging from history, Indonesia is not a country that has a strong tradition in the world of motorsport, although in recent years millions of dollars have been disbursed by a number of Indonesian brands to teams that compete in various classes of the MotoGP world championship.

However, it is never too late to start this, especially if you look at the success of Malaysia and Thailand which have succeeded in becoming a regular part of the MotoGP calendar.

“If I say Indonesia is better off becoming the host country first, but routinely, don’t lose it for a year or two, like in Sentul before, it only disappeared from 96-97,” said automotive observer Arief Kurniawan.

“If you want to be considered a motorsports host country with a strong tradition, the events must also be held regularly.”

Arief assessed that the Mandalika Circuit has a ‘unique selling point’ because it is located in a special economic area and is close to various leading tourist destinations in Lombok.

The former editor-in-chief of the Bola tabloid is even optimistic that the Mandalika Circuit will beat the prestige of other Southeast Asian circuits that have previously held MotoGP, such as Sepang in Malaysia and Chang in Thailand.

“Indeed, currently access is difficult, but in the next four to five years access will be easy, it takes a process,” he said.

Not to mention the enormous branding power of the MotoGP racing event itself which will raise Indonesia’s prestige in the eyes of the world, thereby increasing the confidence of manufacturers and international companies to establish partnerships.

“This means that when it is held, Indonesia has become part of the global players that this country is safe, developed, friendly country because people don’t have to worry about coming to Indonesia because they can hold (races) successfully. The wow effect will be huge with this Mandalika,” Arif concluded. [antaranews]