THE UNIQUENESS OF ‘TUMPENG’ IS AN INDONESIAN CONE-SHAPED RICE DISH 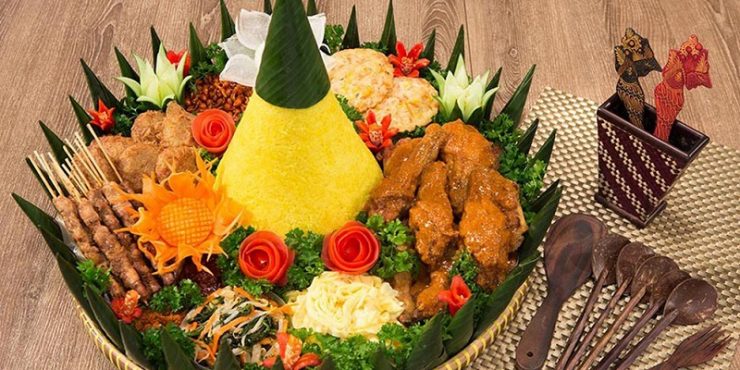 ACCORDING to the Great Indonesia Dictionary (KBBI), tumpeng is an Indonesian cone-shaped rice dish served typically at the selametan ceremony and other events. However, one really wonders where the term tumpeng originated from.

Tumpeng is just not a name, but it has an interesting meaning. In Javanese society, tumpeng was an acronym from the sentence ‘yen metu kudu mempeng’ that meant ‘if we want to get out, we must be serious’ or if we want to do something, it is better to do it sincerely or from the heart.

According to the lecturer of Javanese Literature at the University of Indonesia Dr Ari Prasetyo, the sentence could mean that humans must align with God to lead a full life, with spirit, confidence, and focus. We have to believe that God is with us.

History of tumpeng
Tumpeng is an iconic dish that is an intrinsic part of the Indonesian Independence Day celebrations, as it always features in the main course during tirakatan night. Tumpeng is also presented during major events, such as selametan, syukuran, birthday partys, and tirakatan. This certainly holds historical, traditional, and philosophical significance for the Indonesian people. Hence, what is it about the origin or history of tumpeng on account of which it is considered as a symbol of celebration?

Quoted from the book of Bali Bukan India, tumpeng was a representation of Indonesia’s geographical condition typified by volcanoes. This dish aims to glorify the mountain as the abode of the ancestral spirits.

Initially, tumpeng was prepared by Javanese people and those in its surroundings as a sign of respect for ancestors, who they believed inhabited the mountains. This occurred a long time before the religion entered the archipelago.

When Hinduism arrived in Indonesia, the celebration and making of tumpeng underwent a slight change, specifically in terms of the shaping. The rice began to be made into cones during the Hindu era. The cone resembled the shape of Mahameru Mountain where their gods and goddesses lived.

After Islamic religion came to the archipelago, the making of tumpeng was again changed according to Islamic rules and what was originally to glorify the mountain turned into a form of gratitude to the God Almighty. Eventually, tumpeng is known until now and commonly prepared for certain celebrations, such as syukuran and kenduri.

The meaning of tumpeng
Apart from having the meaning, “if we want to get out, we must be serious,” tumpeng also has another connotation. The shape and the side dishes around tumpeng describe the meaning of life on earth and symbolize the ecosystem of life. Prasetyo, as quoted by the media, explained that tumpeng is served during celebrations, as it has meaning and important value, including:

1. Concept of the God
This concept described that tumpeng holds meaning as being emblematic of the relations between humans and God. This is related to the cone-shaped rice, which is a representation of the top of a mountain or the concept of the God. Quoted from the Book of Tantupanggelaran, from the Majapahit era, tumpeng is spoken about when the Java Island shook.

From the book, Batara Guru, related to the Hindu concept, ordered to bring the peak of Mahameru in India to stabilize Java Island, and it became Mount Semeru in East Java. Moreover, the peak of Mahameru is believed to be where the Gods end up. Humans also understand the concept of God as something great and high, and is at the top, akin to the mountain peak.

2. Concept of gratitude to God Almighty
Generally, tumpeng was considered as a form of gratitude for someone to remember various historical moments. Hence, he believes it is the reason behind tumpeng being an important element in celebrations. In this, of course, the Indonesian people are grateful for the independence that has been enjoyed for 76 years.

In addition, the towering shape also symbolizes the hope that the level of human life will be “higher,” specifically prosperous, safe, and peaceful, with economical food and clothing, as well as far from disasters.

The meaning of tumpeng’s side dishes:
Rice
Tumpeng was usually made from white rice. However, currently, tumpeng is available in variations, such as made from uduk rice and yellow rice. The cone-shaped white rice symbolizes something that we eat must be clean and halal food.

Chicken
The chicken that was usually used in tumpeng was a rooster. This choice is made for avoiding the bad nature of the rooster, such as being arrogant, always interrupting talks, and always feeling one is right.

Catfish
Not only chicken, but catfish is also used in tumpeng. Currently, most people choose the other types of fish, as the shape of catfish is less interesting. Catfish is a symbol of fortitude and tenacity in life since it was able to survive in water that did not flow and at the bottom of rivers.

Anchovy
Anchovy was also commonly served for tumpeng. Anchovy signifies the togetherness and harmony, as the species always lived in a group in the sea.

Egg
Egg becomes a symbol that humans are created with the same nature. A fully boiled egg is usually used for tumpeng. Before eating, one must peel the egg first. It means all actions must be planned in advance (peeled), carried out according to the plan, and evaluated to get perfect results.

Urap
Urap usually comprises kangkung, spinach, long beans, bean sprouts, and urab seasoning, made from grated coconut sauce. The vegetables used symbolize several things: Kangkung or jinangkung to protect, spinach interpreted as being calm, sprouts depict growth, long beans can be interpreted as thinking far ahead, shallots interpreted to consider everything carefully, both good and bad, while Urap seasoning means urip in Javanese language or living or being able to support the family.

Red chili
Red chili is shaped to form flower petals and usually placed on top of the tumpeng. It symbolizes fire that provides light for all.

The various types of tumpeng
Basically, tumpeng in every region is similar, though the side dishes are different. However, with passage of time, tumpeng is now available in various forms and decorations.

Megana
This form of tumpeng is specially made for birth events and white rice symbolizing purity is used. The various types of vegetables used in this dish depict hope for the newborn baby in future. This tumpeng is generally decorated with red chili and eggs.

Robyong
This type of tumpeng is filled with sticks lit with cotton. Later, the sticks will be oiled at each end and burnt. This tumpeng was used for rituals and wishes of the people, such as for treating diseases and praying for the rain and harvesting season.

Punar
This type of tumpeng was made as a form of gratitude and joy. People usually use the yellow rice and add side dishes, such as dry tempeh, fried soybeans, shredded foods, and the other side dishes.

Pungkur Tumpeng
This tumpeng generally uses white rice that is only half done. The rice is then divided in two vertically and then placed again in an inverted way. This is generally prepared in the event of a death.

Kapuranto
The rice in this tumpeng is blue in color, and seven types of side dishes comprising fried meat sauce, urap, noodles, capcay, egg, meat stews, and cakes are served. This tumpeng is a form of apology. The blue color of the rice is derived by usually using the leaves of the telang flower.

Cutting the tumpeng rice cannot be done carelessly
On account of the major philosophy attached to tumpeng, its cutting must be right. The wrong way of cutting can be considered to violate the philosophy of the tumpeng itself.

Generally, tumpeng is cut at the top first and then served on plates with various side dishes and given to loved ones, just like a birthday cake. Researcher at the Center for Food and Nutrition Studies at Gadjah Mada University, Murdijati Gardjito, explained how to cut tumpeng rice properly.

The cone-shaped tumpeng, wide below and pointed at the top, resembles the image of Mount Mahameru in India. The mountain is considered a sacred place, the abode of the gods. At the top of the tumpeng is a grain of rice that is a symbol of God Almighty and further down are the people, with various levels of behavior.

According to Murdijati, more people are found to behave in a not so good way, while the perfect ones are counted as few. Hence, the tumpeng should not be cut off the top. Cutting the tumpeng at the top would violate the philosophy of tumpeng, which described the relationship between humans and God.

“Cutting the cone at the top means cutting off the people’s relationship with God,” she said. In addition, the side dishes that are around the bottom of the cone will also not be taken if it was cut from the top.

The right way to eat tumpeng is consuming it together like being surrounded. Eaten together using the hands starting from the bottom, wherein rice is taken along with the side dish. It then shifts to the top and continues down until the peak becomes one with the bottom of the cone. This way means “manunggaling kawulo lan Gusti” or in Indonesian language means “the Creator, where all creatures return”.

Apart from the hands, spoons can also be used for eating this delicacy. As long as you eat the cone from the bottom, do not cut it at the top. According to Murdjati, cutting the cone from above is drawn from the influence of Western culture, which is cutting the cake.

Tumpeng is worldwide
Earlier, this year, Indonesian diplomats in Cape Town, South Africa, held a cultural event with the theme “Nasi Tumpeng: a Traditional Indonesian Dish” on February 21, 2021. Reported from the website of the Ministry of Foreign Affairs of the Republic of Indonesia (on Sept 13), this event was attended by 13 women from various countries that are members of the International Women’s Club Cape Town (IWC).

The introduction of tumpeng was held in two sessions, the first for presenting the philosophy and then how to make tumpeng, followed by a competition to make tumpeng. President of ICW Amanda Osorio was impressed by this event.

“It was such a beautiful, lovely and memorable event. I like this tumpeng so much,” Osorio stated.

Through this diplomacy, the essence of Indonesia is expected to remain etched in the collective memory of participants from all over the world, so that tumpeng gains greater global recognition.

In 2017, tumpeng also drew the attention of delegates from several countries at the 57th World Intellectual Property Organization (WIPO) general assembly in Geneva, Switzerland. Quoted from the media, this tumpeng was made to celebrate Indonesia becoming the 100th member of the Madrid Protocol.

THE INDONESIAN Ministry of Tourism and Creative Economy and the Association of Indonesian Tourism Actors (ASPPI), Waste4Change, Bumi Journey, and the Puteri Indonesia Foundation invite the public to implement...

BY ASKING Allah SWT’s blessing, by asking for permission and support from the honorable members of the Council, the elders and national figures, especially from all the Indonesian people, I ask for permission to...

GIVING EASE ACCESS, THIS HOW SEMARANG REGENCY ATTRACTS THE INVESTORS

IT IS undeniable that the big name of the city of Semarang is too popular, and is able to obscure the popularity of the area that borders its territory. In fact, the buffer area of ​​Semarang City is no less attractive...