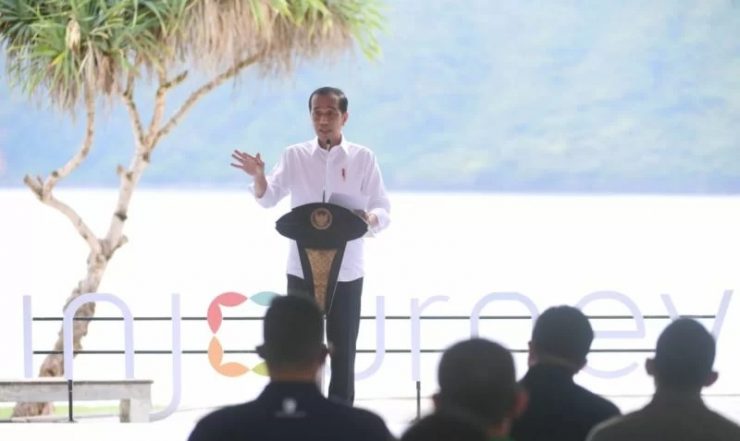 “I see that structuring tourism SOEs is a must because so far I have seen SOEs with many children, with many grandchildren, engaged in the tourism sector and their supporters who are also very large in number, moving from upstream to downstream,” President Jokowi said in a statement on launching of InJourney Holding Tourism and Support at Kuta Mandalika Beach, Central Lombok, West Nusa Tenggara on Thursday (1/13).

According to President Jokowi, State-Owned Enterprises (SOEs) in the tourism sector are spread from the aviation business, airport services, hotels, attractions, management of tourist destination areas, to retail. But what we see are these SOEs and their children and grandchildren running independently, not being consolidated, so that they become weak, weak, weak, weak.

In fact, according to President Jokowi, if it is consolidated in one “holding” it can become a great power.

President Jokowi explained that SOEs in the tourism sector have many good assets with premium-class strategic locations but are not managed with good management.

President Jokowi added that from the beginning he had repeatedly said that state-owned enterprises in the tourism sector should restructure, but this has only been implemented at this time.

“Thanks God, today, by forming a Tourism and Supporting BUMN holding, our tourism management will God willing, it will be carried out efficiently, integrated from upstream to downstream. Starting from flight route planning, promotional content, events, attractions, culinary, accommodation to retail sales. – retail souvenirs from our craftsmen, which of course have also been well selected,” explained the President.

“The company that will be holding, starting from flights, descending, then managing the airport, has 120 hotels, meaning that the network already exists. Then the tourism areas from Nusa Dua, Mandalika, Likupang, Borobudur, there are Mini Parks. Then, the ‘handycraft’ knick-knacks are Sarinah. This if ‘holds on’ it will become a great force and I am sure, God willing, Mr. President Director Mr. Dony, with long experience in this field, he is able to do that, ” said the President.

According to President Jokowi, a number of things that need to be resolved by the holding company for the state-owned tourism sector are connectivity and infrastructure barriers.

“Where are the points that require infrastructure injections to be resolved immediately. As well as other obstacles, including in terms of governance and management of tourism SOEs, so that this does not erode our opportunity to jump forward,” said the President.

Moreover, during the two years hit by the pandemic, the tourism sector experienced a very deep contraction.

“Before the pandemic, the tourism sector was the second largest foreign exchange contributor with domestic income (GDP) reaching US$10 billion and could provide 13 million jobs, therefore we must face conditions like this and we must not be discouraged, and we must take advantage of this. as a turning point to make a leap,” Jokowi affirmed.

President Jokowi asked “InJourney” to take advantage of this momentum to organize, transform and build a stronger and more resilient ecosystem.

“InJourney” seeks to unify the infrastructure of the tourism sector. Later, the ‘airport’ itself will not be just an airport but will become a ‘life style’ destination, where later there will be derivatives such as food, life style and others. It’s the same when we connect other tourist destinations, where the strength that we don’t have so far is the ‘travel plan’, a travel plan, which if we compare other countries, we already have but if we haven’t formed this ecosystem,” President Jokowi concluded. [antaranews]