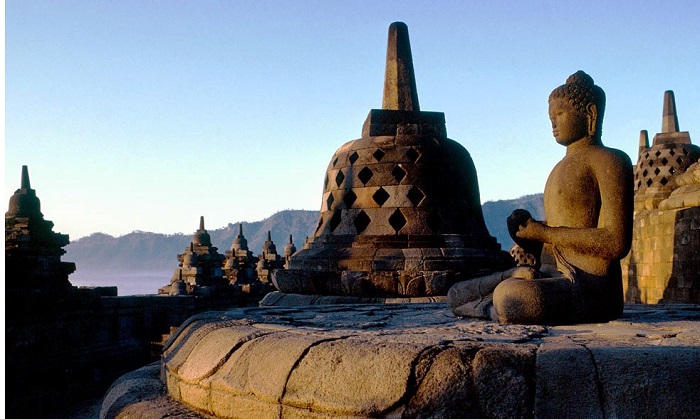 BOROBUDUR Edupark, a destination promoting education and art on Magelang-Yogyakarta Road in Central Java, has opened for visitors.

Some religious leaders, tourism business players, and stakeholders, as well as the president director of PT TWC, the state company that manages popular destinations such as Prambanan Temple and Ratu Boko, also attended the opening.

The Edupark, he continued which includes the Unique Gallery of Borobudur Art (GUSBI), is expected to grow and develop the tourism industry as well as provide new insights and benefits to the tourism sector.

Meanwhile, PT TWC president director Edy Setijono said that the Borobudur Temple is not a mere grandiose monument, but also a center for knowledge.

“Today, we see Mustapha and his team at Nakula Sadewa creating a creative work that is inspired by Borobudur. Mustapha has produced an appreciative work domestically and internationally,” Setijono added.

He also expressed the hope that more figures like Mustapha would emerge from the Borobudur area. Borobudur must be a real opportunity for the nation and people with different expertise.

“Borobudur Edupark showcases the work of Mustapha, a Balinese sculptor who has long settled in Magelang district. His sculptures are world-known and have featured at the Miniature of Borobudur Temple in South Africa, Pairi Daiza Zoo in Belgium, Minimundus Amusement Park in Austria, Wat Khao Sukim Temple in Thailand, Venlo in the Netherlands, and many other sites,” Edy remarked.

A workshop on constructing four iconic gates to the Borobudur area can also be observed at Borobudur Edupark. [antaranews/photo special]