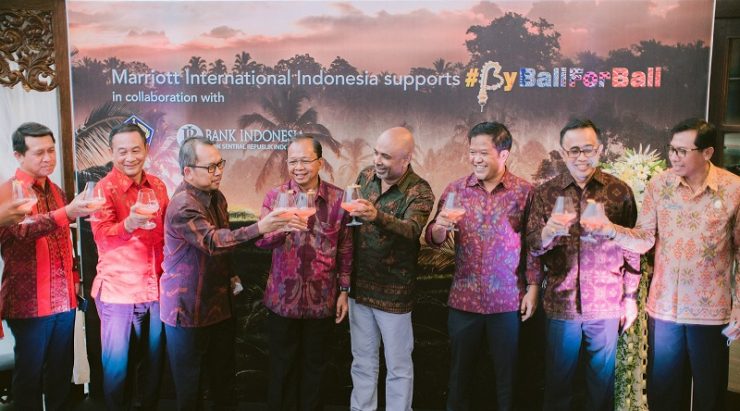 In addition, Ramesh said the campaign represents Marriott International’s commitment to use local resources for 50% of all products by 2025. According to the company, the campaign is in line with the mandate of “Marriott’s Serve360” and the Sustainability and Social Impact Goals 2025.

“Serve 360: Doing Good in Every Direction” itself is a platform that guides Marriott’s commitment to addressing social, environmental and economic issues by providing value for employees, customers, owners, the environment, and people around the world.

“This is the first step in the right direction towards a better and more sustainable future,” said Ramesh.

During the banquet, a portfolio of dishes was displayed, including three variations of satay such as satay lilit, chicken satay, and Balinese satay which was awarded the Gold Medal at the National Competition by Worldchefs in 2018.

Executive Chef, The St. Regis Bali Resort, Agung Gede, initiated a masterclass menu that is presented to provide a unique gastronomic experience for culinary connoisseurs. It offers a variety of Balinese specialties with a focus on sourcing local products.

In addition to satay dishes, the banquet participants were also served a variety of Balinese food made using local herbs and spices as well as a popular traditional Balinese drink, namely Es Daluman.

“With the ethos of using more local produce and paying homage to preserving nature, the principle of sustainability goes hand in hand with efforts to reduce our carbon footprint and take our beloved island’s culinary heritage to the next level,” said Ramesh.

After the launch of the campaign, Marriott Bonvoy in Bali will develop a unique offering of local Balinese products from fruits, mangosteen, oranges, salt, to coffee as part of its portfolio. [antaranews]

LOUVRE Hotels Group in Indonesia announced its upcoming development projects. The group soon to introduce two brands in future development in Indonesia which are Campanile and Tulip Residences. According to Pierre...

HYATT Hotels Corporation announced today the opening of Alila Kothaifaru Maldives, a private island retreat located in the picturesque Raa Atoll at the northern edge of the Maldives. The all-pool-villa resort offers a...

AMAN is pleased to announce that the highly anticipated Aman New York will welcome its first guests on 2 August 2022. The culmination of a monumental transformation of the iconic Crown Building in Manhattan, the 83...