PTI HAS CREATED DISABILITY BUSINESSMEN AND MSMEs IN THE DIGITAL AGE 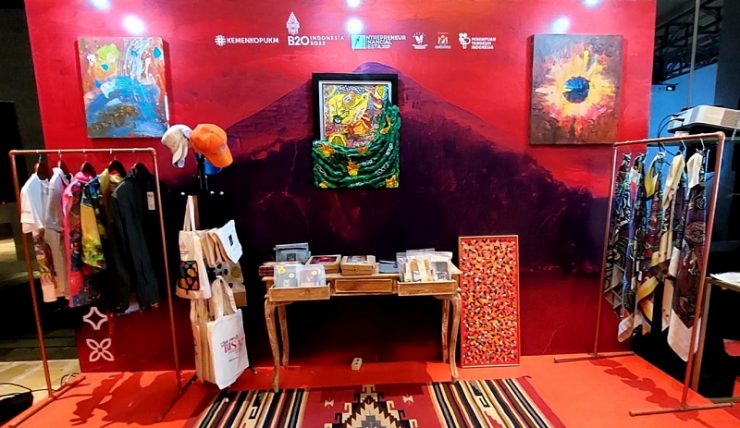 THE MINISTRY of Cooperatives and Small, Medium Enterprise (SMEs) held a Side Event B20, highlighting the active movement of the Perempuan Tangguh Indonesia (PTI) or Indonesian Tough Women who created disabled businessmen and filled the role of accelerating Micro, small and medium enterprises (MSMEs) in the digital era.

According to the Minister of Cooperatives and SMEs, Teten Masduki at the opening of the B-20 side event virtually said with “Spirit No One Behind” in the digital economy era, the B-20 side event activity was held by the Ministry of Cooperatives and MSMEs at the Hilton Hotel, Nusa Dua, Bali, Monday (8/8) and during the B20 activity, the Indonesian Women’s Foundation for Tangguh got a stage to present the work of friends with disabilities.

“The works displayed are the results of the ‘alumni’ of the Beginner Entrepreneurship for Friends of Disabilities training that has been held by PTI since 2020, as well as the works of friends with disabilities who participated in the curation process for the exhibition. The works of friends with disabilities include crafts, culinary paintings and exhibitions of MakeUp Artist skills who come from various cities in Indonesia, as well as various merchandise such as tote bags, scarves that are realized from their paintings, “he said.

Teten explained on this occasion mentioned the choice of the theme “Digital” Economy to Support Sustainable Development Goals” in accordance with the focus of the G20 presidential agenda in digital transformation, related to preparing a new landscape of cooperation between countries and stakeholders to ensure mutual prosperity in Indonesia.

Speaking of the digital economy, he continued of course it is very complete by utilizing digital technology aspects related to the process of SMEs and cooperatives.

86% of SMEs depend on the internet to run their business. Not surprisingly, I pays attention to and supports PTI’s active steps which according to him can be developed to give birth to disabled businessmen who increasingly encourage the strength of the digital economic ecosystem for disabilities so that it is in line with the government’s efforts.

He added that the current Perempuan Tangguh Indonesia (PTI) activity is focused on developing the potential of disabled businessmen who live around Greater Jakarta and West Java. It is hoped that persons with disabilities who enter their productive age will maximize their potential to work and become financially independent.

“We often ignore that these disabled friends are actually part of our potential economic ecosystem, and this is what PTI is trying to build, although step by step, we do activities according to our capacity and don’t hesitate. The important thing is that every child gets attention, and we really try to provide assistance until they can be independent,” said Myra Winarko.

She cconcluded that the assistance provided by PTI is not limited to providing training, but continues to accompany participants, especially those who seem to love their work and are serious about progressing. [traveltext.id]