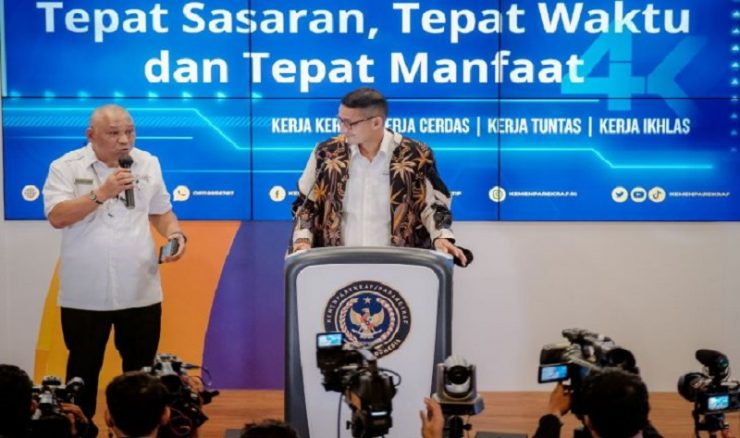 TOURISM and Creative Economy Ministry to accept inputs from tourism and creative economy actors in Labuan Bajo, East Nusa Tenggara, regarding the IDR3.75-million (US$251) entry fee to Komodo National Park.

According to Minister Sandiaga Uno stated in a weekly press briefing here, Tuesday said this discussion has an important role to ensure that there will be favourable solutions for relevant parties. We also want that conservation and economic recovery efforts can be implemented in parallel.

The minister highlighted that the government had decided to shelve the imposition of the new entry fee until 2023 following a public backlash.

He then urged relevant stakeholders to resume the discussion to ensure that economic recovery efforts will not be hampered.

“Now it is time for us to continue our discussion to ensure that our efforts to advance (economic) recovery can resume,” Uno remarked.

Meanwhile, the ministry’s Deputy of Destination and Infrastructure Development Department, Vinsensius Jemadu, confirmed that the situation in Labuan Bajo has been conducive.

“The ministry and local authorities had discussed the issue with tourism actors in Labuan Bajo on Thursday (August 4) and Monday (August 8). The ministry’s deputy said the discussion went fruitful, and stakeholders agreed to delay the imposition of the IDR3.5-million entry fee until 2023,” he noted.

Jemadu explained that the current entry fee to Komodo National Park will remain at IDR150 thousand (US$10.05), according to Government Regulation No. 12 of 2014 regulating types and tariffs of non-tax state revenues on the forestry ministry.

“The ministry and relevant stakeholders will also draft a public communication mechanism and monitoring to minimise the potential of miscommunication in the media and society,” Jemadu concluded. [antaranews]