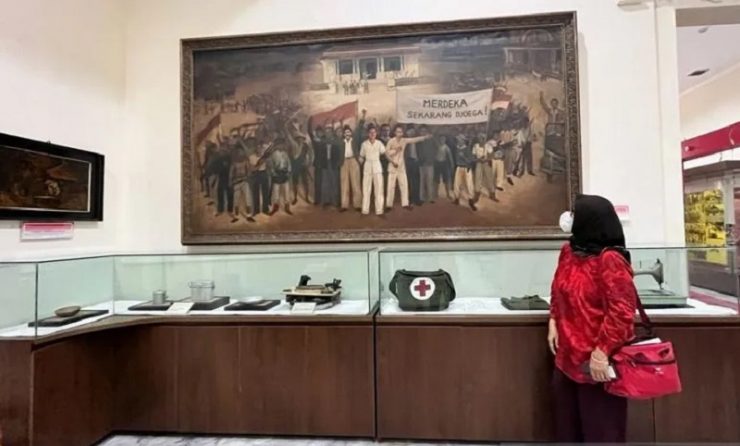 “HORMAT (respect) grak!”, faintly heard the screams of a teenager who acted as a ceremony inspector while at the Joang ’45 Building Museum, located on Jl. Menteng Raya 31.

The voice was heard from the field behind the building, between the voices of the guide explaining the diorama depicting the kidnapping of Soekarno and Hatta by young people who wanted them to quickly proclaim Indonesia’s (RI) independence, as well as the voices of a group of students recording a video to explain the contents of the museum. for their schoolwork.

In the month of independence, museums related to historical events for the Indonesian people became an interesting place to visit. Head of the Executive Unit for the Joang ’45 Museum, Sukrino, said last week the visit to the historic building was very significant in August. The number of visitors increased two to three times. The average visitor ranges from 30-40 people, especially in August, people who are interested in coming reach more than 100 people.

This building with large and magnificent pillars is a silent witness to the events that occurred before the independence of the Republic of Indonesia. This building is a place to formulate various action plans to seize and defend independence.

In modern times, this historic day is celebrated by the public by holding a flag ceremony, a moment that was carefully prepared by selected junior high school students from various schools in DKI Jakarta to become members of the flag-raising squad at Gedung Joang ’45.

In the past, this building witnessed the youth movement. The building, which is located on Jalan Menteng Raya 31, was once the headquarters of radical youths during the Japanese occupation and the national movement.

The Menteng 31 building is the place where the youths devised a plan to kidnap Bung Karno and Bung Hatta to Rengasdengklok to immediately proclaim independence, as well as the place where the leaders in the Van Action Committee initiated a giant meeting at the IKADA (Jakarta’s atletic) field to show the world that Indonesia was free from colonialism.

Before witnessing the struggle of the youth, Gedung Joang ’45 which was once a forest area full of menteng trees – the reason behind the name of this area – was the most magnificent Hotel Schomper in its era. The magnificent marble pillars are still clearly visible today, the hallmark of the buildings that are thick with ancient colonial style. Hotel built by Dutch woman L.C. Schomper in 1938 was specially stopped by foreign traders and high-ranking Dutch officials who were in Batavia.

This building has a large living room in the center of the building, a dining room near the kitchen, a warehouse, three rooms for the cook. This building is flanked by other buildings on the right and left which form two wings. There are eight large rooms on the right wing and five rooms on the left wing. The room is now used for other functions such as a library room.

In 1942, the hotel was taken over by the Japanese Propaganda Sendenbu and handed over to young Indonesians such as Adam Malik, Sukarni, Chaerul Saleh and A.M. Hanafi. Before long, Menteng 31 Building became the headquarters of the People’s Power Center of the Japanese defense agency to control the nationalists. However, the youths requested that this place be used as a base for fast-moving youth command activities between the center and the regions.

Visitors to the museum were greeted with profiles of youths who took part in the action to seize and defend independence, as well as Bung Hatta’s work table and lounge chairs made of rattan.

There are also past army uniforms, bagor cloth used by the people as clothing during the Japanese colonial period as a substitute for rare cotton, items for members of the women’s army who fought, dioramas of historical events such as the formulation of the proclamation text, as well as weapons of war equipment of the past. to a replica of General Sudirman’s stretcher. [antaranews]

THE BLEND OF NATURAL BEAUTIFUL AND TENGGER CULTURE AT BROMO, SEMERU

IT IS Robert W. Hefner, Indonesianist and Professor of Anthropology at Boston University, United States, who in his book entitled Hindu Javanese: Tengger Tradition and Islam, explained that the people or wong Tengger...

THE DIFFERENCE BETWEEN INDONESIA & MALAYSIA FOR DIGITAL NOMAD TOURIST VISA

INDONESIA and Malaysia have both just released digital nomad visas for foreign tourists in 2022. Indonesia, first offers the visa to travelers. Minister of Tourism and Creative Economy Sandiaga Uno said in the January...

INDONESIA BERTUTUR OF REFLECTION ON CARING FOR A SUSTAINABLE CULTURE

IN THE last few days, the Borobudur Temple Tourism Park complex in Magelang, Central Java, was not only crowded with tourists visiting to witness the splendor of Borobudur Temple, but also many visitors who wanted to...