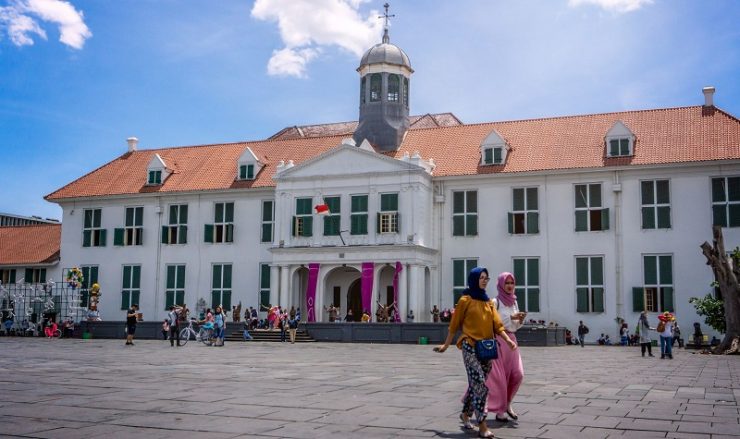 THE scorching sun failed to waver the enthusiasm of members of the community that continued their activity at West Jakarta’s heritage area that day despite sweat dampening their shirts and their throats going parched dry.

According to Assistant for Economy and Development at the West Jakarta City Government, Imron, said that his side was revitalizing Kota Tua to make the attraction more comfortable for visitors.

The government attempts to rearrange sidewalks in the area, including relocating the street vendors to the “Kota Intan” (Diamond Town) area. Currently, it is the most important task that has to be fulfilled by the government, Imron noted.

Currently, the West Jakarta city government is focusing on organizing traders around Kota Tua to move to Kota Intan, including inspecting and studying which buildings in the relocation area can be used as stalls for traders.

Thus, the government plans to enliven Kota Intan in future by developing culinary and shopping tourism as well as by holding various cultural, music, and other entertainment events.

Furthermore, the government conducted traffic engineering study along with other related institutions, so that visitors would have to pass through the vendors’ relocation area before reaching Kota Tua. In addition, the government plans to prohibit tourists from parking their vehicles in Kota Tua.

Imron requested that every vehicle at the tourism destination be directed to the parking area at Kota Intan.

His side has also instructed the Parking Technical Implementation Unit (UPT) to extend the parking lot’s operating hours in the vendors’ relocation area to 11:00 p.m. Western Indonesian Standard Time (WIB), from the initial 6:00 p.m. WIB. The step aims to encourage tourists to visit and go shopping at the vendors in Kota Intan.

In addition, the infrastructure in Kota Intan will be improved by providing more toilets and prayer rooms; separating washbasins and sinks for washing dishes; as well as installing more fans and street lights.

The attempts also aim to facilitate micro, small, and medium enterprises (MSMEs) actors to sell their products in the area.

Hence, the West Jakarta City Government also urged Satpol PP to consistently monitor Kota Tua, so that street vendors, who had agreed to move to Kota Intan, would not return to open their stalls on the sidewalks.

The attempts to revitalize Kota Tua drew positive responses from visitors and roadster bicycle (locally called ‘sepeda onthel’) rental vendors since the renovation had made the area more organized.

Muhammad Ayub, a visitor, said that the distinctive historical buildings of the area were a source of attraction. Hence, he supported the revitalization attempt in order to increase the aesthetic appeal of Kota Tua.

He assessed that the efforts had improved the condition of the area since it is now neater and cleaner as compared to that before the renovations were conducted.

Another visitor, Nabila, also supported the revitalization attempt. Kota Tua is a tourism destination, with large open spaces and cool weather, so it can become an alternative tourism spot apart from the mall.

Nabila expressed keenness to visit Kota Tua again after the revitalization was completed.

Support from MSME Players
The revitalization is also supported by traders and MSME players in Kota Intan. They supported the rearrangement of Kota Tua to draw more visitors to the area in future.

Hence, the merchant also supported the plan to concentrate the parking area for Kota Tua visitors in Kota Intan since it will boost economic activities in the area.

Rofiah also expressed optimism that the parking lot would be expanded, as tourism buses frequented Kota Intan due to which a vast parking area is needed.

In addition, the vendor expects Kota Intan to be enlivened with various types of music, entertainment, arts, and cultural activities since the events can attract more visitors to the area.

Another MSME player, Sahrial, who had been running his business in the area since 2017, also conveyed similar thoughts.

Sahrial supports the move to clear traders and visitors’ vehicles in Kota Tua to make both of them concentrated in Kota Intan, so that visitors also flock to the street vendor area.

He also expressed optimism that the traffic engineering planned by the government for the visitors of Kota Tua would direct them to Kota Intan to revive economic activities in the area.

THE BLEND OF NATURAL BEAUTIFUL AND TENGGER CULTURE AT BROMO, SEMERU

IT IS Robert W. Hefner, Indonesianist and Professor of Anthropology at Boston University, United States, who in his book entitled Hindu Javanese: Tengger Tradition and Islam, explained that the people or wong Tengger...

THE DIFFERENCE BETWEEN INDONESIA & MALAYSIA FOR DIGITAL NOMAD TOURIST VISA

INDONESIA and Malaysia have both just released digital nomad visas for foreign tourists in 2022. Indonesia, first offers the visa to travelers. Minister of Tourism and Creative Economy Sandiaga Uno said in the January...

INDONESIA BERTUTUR OF REFLECTION ON CARING FOR A SUSTAINABLE CULTURE

IN THE last few days, the Borobudur Temple Tourism Park complex in Magelang, Central Java, was not only crowded with tourists visiting to witness the splendor of Borobudur Temple, but also many visitors who wanted to...