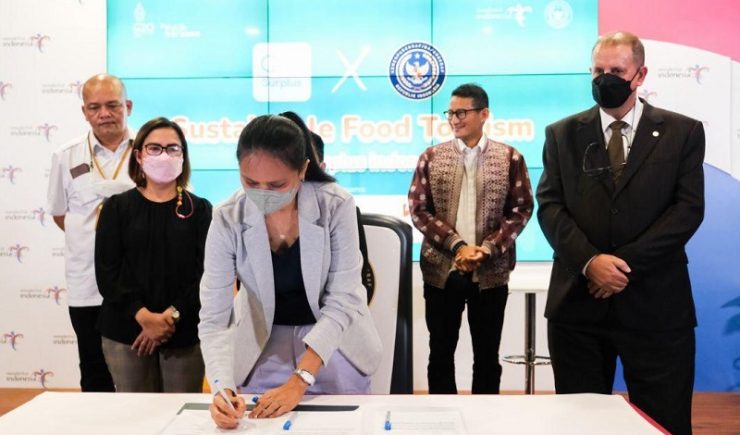 THE MINISTRY of Tourism and Creative Economy cooperates with Surplus Indonesia, which is supported by a number of hotel industries, to launch the Sustainable Food Tourism program which is expected to reduce the level of food waste and food loss in Indonesia.

According to the Minister of Tourism and Creative Economy, Sandiaga Uno, said Indonesia is one of the largest food loss and waste producing countries in the world. Based on data from a study by the Ministry of National Development Planning (Bappenas), food waste wasted in Indonesia from 2000 to 2019 reached 23-48 million tons per year (equivalent to 115-184 kilograms per capita per year).

“The big food waste problem in Indonesia, on the other hand, is an irony. Because based on data from the 2021 Global Hunger Index, the level of hunger in Indonesia is ranked third in Southeast Asia. This condition is our common problem, especially in the tourism industry sector in hotels and restaurants that have food and beverage facilities,” said Sandiaga Uno.

He explained that for that the Ministry of Tourism in collaboration with Surplus Indonesia and hotel chains in the country made a program to reduce the rate of food waste and food loss problems.

On that occasion, Minister Sandiaga also explained about the realization of investments obtained by creative economy players participating in the Food Startup Indonesia (FSI) program. Where in the period from January to August 2022, the alumni of FSI participants have received financing commitments with a total investment value of IDR46.9 billion.

“That is the Vilo Gelato brand that received financing from LandX, a fintech securities crowdfunding platform that has been licensed by the OJK in the amount of IDR14.7 billion. Then there is Baranusa by Katuju which received business financing of IDR6 billion from angel investors, namely Siti Bening Lestari and Prasetyo Dwi Nugroho after participating in the 2022 FSI Demoday in Bali,” he concluded. [traveltext.id]