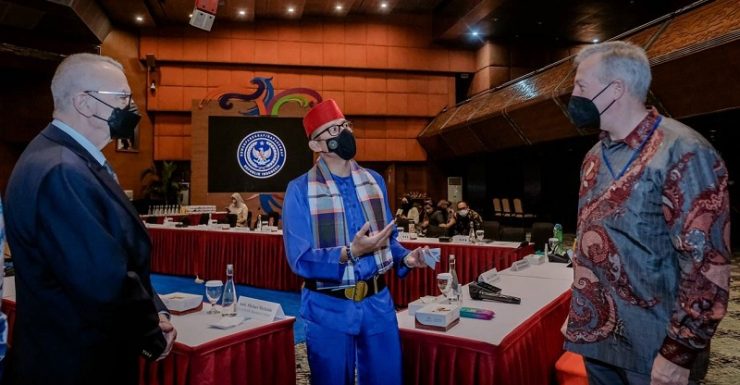 THE MINISTRY of Tourism and Creative Economy invites US-ABC members to support and take advantage of various tourism and creative economy development programs run by the Indonesian government. Especially in an effort to encourage economic revival and the creation of jobs in the frame of quality and sustainable tourism.

According to the Minister of Tourism and Creative Economy, Sandiaga Uno when receiving a visit from members of the US-ASEAN Business Council (US-ABC) delegation led by the Ambassador of the US-ASEAN Business Council, Ted Osius at the Soesilo Soedarman Hall, Sapta Pesona Building, Tuesday (8/23), said one of them was in strengthening the capacity and capability of micro and small and medium enterprises (MSMEs) in the tourism and creative economy sectors by digitizing in our efforts to create 1.1 million new jobs this year and 4.4 million jobs in 2024.

“This meeting aims to increase the understanding of the US business community towards the policies of the Government of Indonesia and efforts to increase economic cooperation between the US and Indonesia, especially in the tourism sector and the creative economy as one of the strengths of the national economy,” he said.

Sandiaga explained, digitalization has a very important role in line with a major paradigm shift in which the digital-based economy accelerates very quickly due to the COVID-19 pandemic. With a digital touch, it will basically create quality and sustainable jobs.

Minister Sandiaga further explained, currently the Ministry of Tourism is also focusing on encouraging the creation of quality and sustainable tourism. One of the big themes that was carried out was the target of reducing carbon emissions by 50% in 2035 and net zero in 2045. In addition, several other initiatives, such as in handling food loss and food waste.

He added, we really welcome and support the expansion of the relationship between the Ministry of Tourism and Creative Economy and US-ABC. And we fully welcome you to participate and support our plans going forward.

On that occasion, Sandiaga specifically invited all US-ABC delegates to attend a number of events in the series of the Indonesian G20 Presidency. Starting from World Tourism Day, Tourism Working Group, Tourism Ministerial Meeting, World Conference on Creative Economy, as well as the ASEAN Tourism Forum.

“So I really hope for your participation to see firsthand and actively take part in this extraordinary journey to experience Indonesia’s extraordinary recovery,” said Sandiaga.

Meanwhile, the Ambassador of the US-ASEAN Business Council, Ted Osius, said that his party greatly appreciates Indonesia’s global leadership in the G20 presidency which will encourage joint efforts in the revival and recovery of the global economy.

“The number of trade between the United States and Indonesia last year increased by 30% to US$26 billion per year. We are very happy and strive to continue to increase the existing potential, including in the tourism and creative economy sectors,” said Ted Osius.

Moreover, said Ted, President Joko Widodo in his State of the Union address last week said he would continue to increase international cooperation.

“That’s why we’re here to see what we can do to support all of these, these important goals. What can we do to help Small, Medium Enterprises (SMEs) and digitalization,” Ambassador Ted concluded. [traveltext.id]