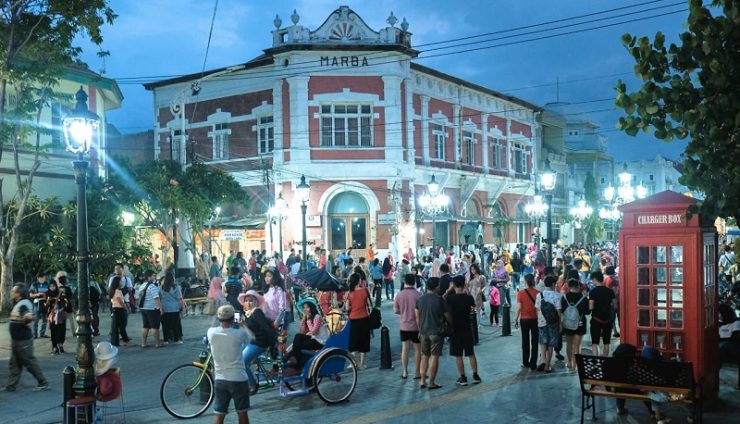 AUGUST is a special moment for Indonesia. Recently, the people of Indonesia commemorated the 77th Independence Day. Remembering the past history of this country by traveling might be an interesting choice for you. Because, Indonesia is rich with a thick history and culture that has been passed down from generation to generation.

The following are seven historical tourist attractions that you can visit:
1. Gebang Palace, Blitar
The cities of Blitar and Soekarno cannot be separated. The house is located on Jalan Sultan Agung No. 69, Blitar City is the place where the Proclaimer spent his childhood. This house is actually the residence of the husband of Soekarno’s older brother, Sukarmini, whose name is Poegoeh Wardoyo. Soekarno’s parents also lived in this place.

When arriving in this area, visitors will see a statue of Bung Karno standing tall in front of the house. Next, tourists are greeted by an old building with the characteristics of past housing with a thick Dutch accent in every corner. That’s because this house was previously owned by a Dutch railway employee named CH. porter.

When you are inside, you will feel the distinctive feel of the past. Almost every corner of this house is still equipped with beautiful antique furniture, from the living room with woven wooden chairs to the guest bedroom that is arranged. You can see Soekarno’s room which is still neatly arranged with white sheets and a bedroom hood.

2. Bung Karno’s Exile House, Ende
Are you interested in vacationing on the island of Flores? Don’t forget to stop by Soekarno’s exile house in Ende Regency, East Nusa Tenggara (NTT). In this place, Soekarno and his family were exiled by the Dutch East Indies government. This house of exile was also what prompted Soekarno to rise up against Dutch supervision.

While in exile, he liked to visit villages in Ende and greet residents. Bung Karno also contemplated Pancasila, which is currently the basis of the state life of the Indonesian people.

Now, the house has become one of the important historical sites of this country. Not far from there, you can stop by Bung Karno’s Contemplation Park in Rukun Lima Village. Tourists will also find the Bung Karno statue sitting contemplating under a five-branched breadfruit tree while gazing at the sea.

After that, you can stop by to enjoy the beauty of Lake Kelimutu which is located not far from the exile house.

3.Japan Hole, Bukittinggi
The Japanese hole is a tunnel that is made as deep as 60 meters under the City of Bukittinggi, West Sumatra. The location is not too far if you walk from Jam Gadang, only 15 minutes. Arriving there, you can take advantage of the services of a guide at a cost of around Rp. 60,000 to accompany and tell you about the history of the Japanese hole.

The area that was once considered the longest hole in Asia holds a dark historical record during the Japanese colonial period. On the instructions of Lt. Gen. Moritake Tanabe, Commander of the 25th Division of the Japanese Army, this hole was built for the protection of Japanese troops in 1944 by forced laborers from outside Bukittinggi, such as Java, Kalimantan, and Sulawesi.

This hole has 21 branch passages that were once used as army barracks, courtrooms, command rooms, ambush doors, escape doors to massacre sites. Of the approximately 6 kilometers, only 1.5 kilometers are currently opened for tourism needs of the general public and the rest are closed by the government.

4.Fort Rotterdam, Makassar
Located in front of the port of Makassar City, Fort Rotterdam in the past was a fortress built by the Kingdom of Gowa-Tallo in 1545 and fell into the hands of Vereenigde Oost-Indische Compagnie (VOC) around 1667. was destroyed by the VOC during the raid.

Throughout the history of Indonesia, this fort has had various functions according to circumstances. For example, when it fell to the Dutch, Fort Rotterdam became the headquarters of the defense command, the trade headquarters, and the residence of central government officials. Meanwhile, during the Japanese occupation, this place was once a prisoner of war camp during the World War II era.

Since the 1970s, the fort has been restored and has been converted into a cultural, educational center, a venue for music and dance events, and a historic tourist destination. Even in this area, you can stop by the South Sulawesi Provincial Museum called La Galigo, which exhibits a variety of historical objects, manuscripts, statues, ceramics, and clothes from the past.

5.Old Town, Semarang
The Old City of Semarang was once one of the central areas of government and trade in the 19th and 20th centuries. There are about 50 historic buildings that still stand strong. Exploring this area on foot will be fun. You will be presented with a variety of typical European architectural buildings of the 1700s with main doors, large windows, decorative elements, and high ceilings.

Around this area, you can see buildings that are still very thick with the feel of the past. Such as Semarang Tawang Station, Nilmij, Marba, Srigunting Park, to one of the oldest churches in Central Java, the Blenduk Church.

In addition to attracting the attention of domestic tourists, the Old City of Semarang also attracts the attention of foreign tourists. This area can be one of the destinations of choice for you to trace historical traces.

6. Baiturrahman Grand Mosque, Banda Aceh
The mosque, which was built by Sultan Iskandar Muda in 1612, is a symbol of religion, culture, and the struggles of the local community. Throughout the history of Indonesia, the Baiturrahman Grand Mosque has had many functions. Besides being used as a place for religious activities, this mosque was once a place to broadcast Islam. Once upon a time, apart from local residents, quite a number of immigrants from Malay, Persian, Arabic to Turkish came to study at this mosque.

During the colonial period, the Baiturrahman Grand Mosque also served as a defense headquarters against enemy attacks during the leadership of Sultan Alaidin Mahmud Syah. Even during the 2004 tsunami, this mosque became a temporary shelter for refugees.

Now, the Baiturrahman Grand Mosque has become one of the iconic historical and religious tourist destinations in Aceh. You will feel the splendor of this mosque as one of the centers of Islamic civilization. The splendor is felt because the style of the building uses Mughal architecture, which is characterized by large towers and domes, three large wooden doors and decorated with many ornaments and interiors–walls and pillars with relief, marble stairs, and floors–from China, to stained glass from Belgium.

7.Taman Sari, Yogyakarta
Only with an entrance ticket for IDR5,000, you can enter Taman Sari Yogyakarta, which is a recreation and resting place for Sultan Hamengku Buwono I, the empress, children, and his relatives. You can see traces of this area which used to consist of bathing pools, changing places, gardens, rooms for dancing, and others.

In addition, Taman Sari also became a defense location. Because, this area has underground passages, kitchens, suspension bridges, and various other buildings.

If you want to retrace the past history of this area, you can take advantage of the services of a tour guide at a rate of IDR50,000 per person. In addition to accompanying you to explore the entire area, the guide will also explain the historical context and the use of other parts of the building in Taman Sari when it was still functioning. [antaranews/photospecial]

THERE ARE many ways to enjoy the beauty of the Malaysian city of Kuala Lumpur, one of which is from a height. This can be done by climbing the Kuala Lumpur Tower or commonly called the KL Tower. From the 421-meter-tall...

ENJOYING nature while doing healing, gateway or just an ordinary excursion is commonplace. But what if while on a trip, you can enjoy the ripe fruit of the land just picked to enjoy snorkeling to see marine life that is...

EIGHT INTERESTING NATURAL ATTRACTIONS TO VISIT DURING IN HONG KONG

HONG KONG is known as a place to shop and taste Michelin-quality cuisine. But, make no mistake that Hong Kong also has great natural attractions for relaxing or adventuring. The following are recommendations for natural...