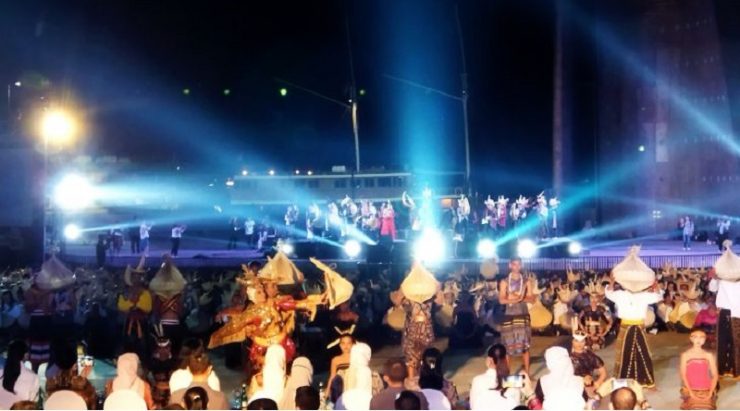 THE “Magical Sound of Sasando for the World,” a music concert involving one thousand sasandos (traditional stringed instruments) in Labuan Bajo, East Nusa Tenggara, (NTT) has received an award from the Indonesian World Record Museum (MURI).

“There are one thousand people (who played the sasandos). The rehearsal was more than two months in Kupang,” music director Izhu Nisnoni informed after the concert in Labuan Bajo’s Waterfront city on Wednesday (9/28) evening.

The sasando players were students from East Nusa Tenggara. In a neat formation, they played one thousand sasandos, accompanied by dancers from the Sanggar Latasga Helong Community and a fashion show by the province’s youths.

The sasando is a traditional stringed instrument originating from Rote Island, East Nusa Tenggara. Over time, two types of sasandos have come into use: traditional and electric.

Local lore associated with the instrument involves one Sangguana, who was stranded on Ndana Island and fell in love with the king’s daughter. To accept his love, the king put a condition: Sangguana needed to make a unique musical instrument. It is this instrument that came to be called sasando.

The sasando performance on Wednesday was attended by First Lady Iriana Joko Widodo and members of the Onward Indonesian Cabinet Era Solidarity Action Organization (OASE KIM). The sasandos were played with 10–12 medley songs that deeply matched the atmosphere of Labuan Bajo’s tropical evening.

The 1,000 Sasando Festival made a MURI record, and the award was presented by Jaya Suprana, the founder of MURI, to the head of the East Nusa Tenggara Crafts Council, Julie Sutrisno Laiskodat.

In addition, an award was also handed over to Rote Ndao district head Paulina Haning-Bullu. In response to a foreign country’s claim on the sasando as its traditional musical instrument some time ago, Nisnoni said that it is necessary for the younger generation to preserve the local cultural heritage. The concert on Wednesday closed with a fireworks party and local music. [antaranews]