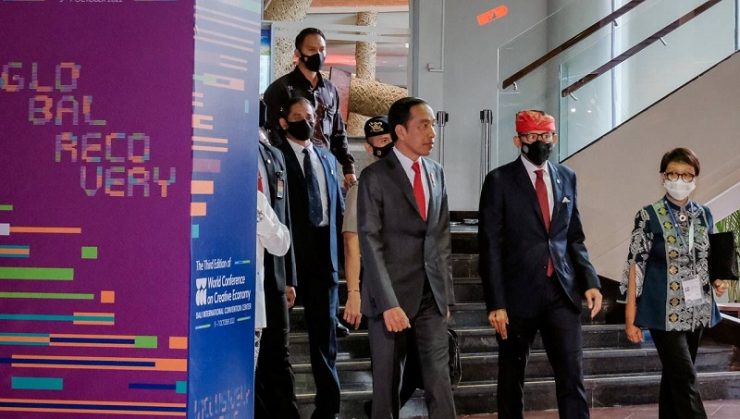 THE creative economy is the main driver of economic growth, accelerating the revival after the pandemic and opening up more jobs. The holding of WCCE 2022 in Bali as part of the side event of the Indonesian G20 Presidency shows Indonesia’s strong commitment to advancing creative economy issues into global thinking.

According to President Joko Widodo (Jokowi) when opening the 3rd Edition of the 2022 World Conference on Creative Economy (WCCE) at the Bali International Convention Center (BICC), Nusa Dua, Badung Regency, he said, the work of the creative industry today easily surpasses state borders. The creative industry is no longer a local product that is consumed by local people, but has become a global product that is easily enjoyed by people across countries.

“When the world limits human physical mobility due to the COVID-19 pandemic, the mobility of creative economy works continues to move without transmitting COVID-19. The creative economy sector is relatively able to survive in the pandemic era compared to other sectors. Some creative economy sub-sectors such as “Applications and game, television and radio developers have even grown significantly, triggered by a significant increase in content consumption during the pandemic,” said President Joko Widodo.

President Joko Widodo also believes that the creative economy in Indonesia and many other countries in the world will become the backbone of the economy in the future that is getting stronger and is considered as an inclusive economic force.

The development of the creative economy must continue to be encouraged so that it becomes a futuristic sector that grows faster, bigger and more advanced.

“A thousand pentahelix actors and creative economy policy makers gathered in the 3rd Edition of the World Creative Economy Conference, a global initiative initiated in 2018 as a vehicle to promote an inclusive creative mission. I see the topics discussed in this conference as very important and “Economic revival, the rights of creative workers and intellectual property, inclusiveness and the SDGs agenda and the future of the creative economy,” the President remarked.

Innovation and creativity supported by a healthy and productive innovation climate coupled with adaptive policies will encourage the progress of a nation’s civilization.