EXPANSION TO PREMIUM AREA, ARTOTEL CASA KUNINGAN HAS BEEN OPENED 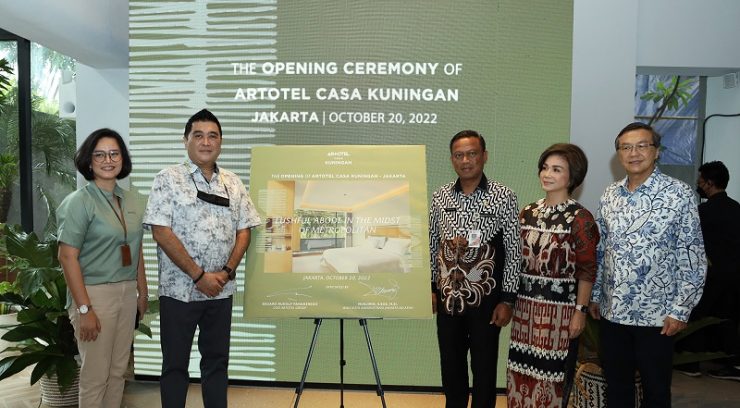 According to Eduard R. Pangkerego, Chief Operating Officer of ARTOTEL Group at the press conference of the hotel opening, on Thursday evening, (10/20) said, ARTOTEL Casa Kuningan is the 2nd ARTOTEL Casa brand property that we opened in Jakarta, after ARTOTEL Casa Hangtuah.

“We are very proud that the Service Residence concept promoted by ARTOTEL Group has received a positive response from hotel investors and the public. We will also present the next ARTOTEL Casa in other cities in the near future,” he said.

Meanwhile Emmy Yuniarti, General Manager of ARTOTEL Casa Kuningan said ARTOTEL Casa is one of the ARTOTEL brands for boutique hotels with a Service Residence concept that prioritizes “personal service” and an environmental atmosphere like being at home. This brand is specifically aimed at business travelers with longer stay periods.

“As one of the ARTOTEL brands, ARTOTEL Casa also carries the concept of contemporary art in a touch of the interior of the facility and has ARTSPACE as a mandatory facility of the property with the ARTOTEL Brand,” she remarked.

She added that as a Service Residence that carries the concept of Modern Art and Lifestyle, especially at ARTOTEL Casa Kuningan, we present the concept of a contemporary Restaurant and Bar such as La-Gazette & BART which is suitable as a casual meeting place and entertainment for its guests.

“We present BART at this hotel because its location is very suitable to provide an atmosphere of Jakarta city views and we combine it with a variety of food dishes, cocktails, mocktails, wine, spirits and musical entertainment offerings,” Emmy Yuniarti underlined.

During this opening period, ARTOTEL Casa Kuningan offers a special price for a stay of IDR888,000 net/night including breakfast for two people and F&B vouchers worth IDR50,000. This price is valid from September 21 to October 31 and through the official website artotelgroup.com/artotelcasakuningan.

Likewise, Gail Aluwi, President Director of PT Selat Niagatama said with the strategic location we chose for ARTOTEL Casa Kuningan, which is in the middle of Jakarta, through the service residence concept offered by ARTOTEL Casa, we want to make this hotel a “home” for travelers; business travelers who come to Jakarta where this hotel can provide supporting facilities to facilitate businesspeople. [traveltext.id]