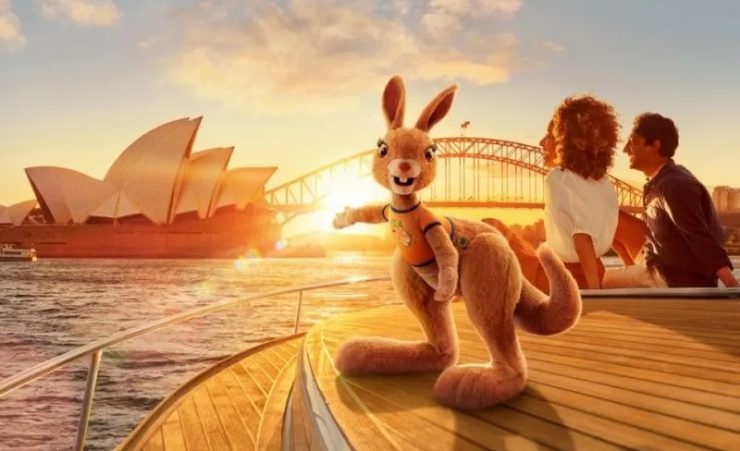 RUBY is a stuffed kangaroo who feels trapped in a toy box at a gift shop, dreams of being able to go on adventures and explore the beauty of Australian nature. His dream was then realized armed with the ingenious mind of a unicorn doll named Louie.

Together, Ruby and Louie “escape” from a gift shop located on the Great Barrier Reef and go on an extraordinary adventure around Australia. They visited iconic sites including Sydney Harbour, the alleyways of Melbourne and breathtaking natural sights like Uluṟu and Nitmiluk Gorge.

Along the way, they explore the splendor of travel experiences Australia has to offer, get to know Indigenous Australian culture and learn why every great adventure always begins with the signature Australian greeting “G’day!”.

The adventures of Ruby and Louie are featured in a new live action short film with CGI animated characters, produced by Tourism Australia.

Just like Ruby, tourists can also plan and do adventures in Australia in their own way. Traveling to enjoy Australia’s nature and culture, after nearly two years of being “locked up” due to travel restrictions.

Directed by Australian director Michael Gracey (The Greatest Showman), the main character in the short film “G’day” is Ruby, voiced by Rose Byrne who is also an Australian actor. While the character Louie is voiced by actor Will Arnett.

“Having the opportunity to voice Ruby is an honor,” said Rose Byrne in a statement.

Byrne mentions that Ruby is a true representation of Australians who she calls warm, friendly, but also has a strong sense of knowing things and as told in this short film, seeing Australia for the first time. [antaranews]

THE END of the year holidays are getting closer. Singapore is still an attractive country to visit for tourists from various countries, including Indonesia. The following are a number of recommendations for tourist...

HONG KONG is one of the tourist destinations for families who want to find a vacation spot full of attractions and culinary options. No wonder this country is a favorite of many people This ever-changing and dynamic...

TO MAINTAIN a balance between work and personal life so that stress does not accumulate, taking a vacation is one of the recommended activities. When you want to “healing” in anti-mainstream places with...