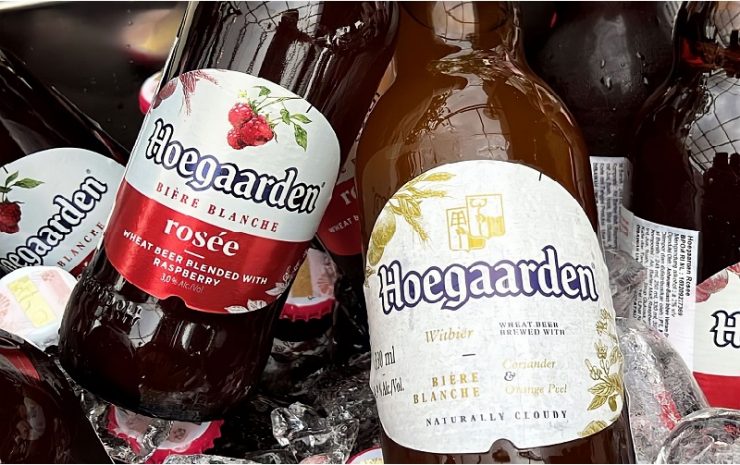 LEADING beer and beverage company Anheuser-Busch Inbev introduced two variants of Hoegaarden beer, namely Hoegaarden Original and Rosée, through the series of events The Gaarden is Open which was launched at Lucy In The Sky, Jakarta on Thursday (11/3).

Hoegaarden beer is a super-premium brand of genuine Belgian wheat beer that is well known in on a global scale, boasting a history-laden recipe dating back to 1445 and time-tested by time. This beer is produced by Anheuser-Busch Inbev of Belgium, which has appointed PT Mitra Indo Maju as the official and exclusive importer in Indonesia.

The recognition of the quality of Hoegaarden Beer has been recognized worldwide, including through awards. The World Beer Cup which is the highest compliment in the beer world. Nine times won a World Beer Cup medal, making Hoegaarden Belgian wheat beer the most won many awards in history.

According to Bir Hoegaarden, Brand Manager of Hoegaarden Indonesia, Kartika Erwanto stated that along with The Gaarden is Open, two variants were introduced this time, namely Hoegaarden Original and Hoegaarden Rosée. The original variant contains 4.9% ABV (alcohol by volume) with a unique and complex taste. This white beer has a combination of sweet, sour, slightly bitter taste, complemented by a touch of spicy taste from coriander and a citrus taste sensation.

“While Hoegaarden Rosée with an ABV of 3%, perhaps it is pink, but it’s a real wheat beer. In harmony with the beautiful color, this variant showcases the taste and soft color of raspberries,” she said.

She explained, Hoegaarden Rosée has a natural sweetness in a rich fruity aroma, accompanied by a hint of spice and coriander. As it is unfiltered, this beer comes in distinctive, vibrant colors with hues of pink to bright orange tones.

Kartika Erwanto added, we are happy to introduce two Hoegaarden variants, namely The Original and Rosée which combine Belgian Beer Heritage and high-quality ingredients. We believe that the presence of Hoegaarden will bring a new color and experience to the beer market in Indonesia.

Meanwhile, Dominic Kirk as General Manager of Anhheuser-Busch Inbev Thailand, Philippines, and Indonesia said we are very excited and proud to launch Hoegaarden in Indonesia. This is a brand with a big history and an even better taste. Hoegaarden is loved by consumers around the world, especially performing very well in the Asia Region, where the brand is recognized as the number one wheat beer.

“Over the last 25 years the brand has launched in China, East Asia, India and (almost) all regions of Southeast Asia where connoisseurs are often beer consumers first non-lager ever tried. Indonesia is at the forefront of our brand,” he said.

Hoegaarden comes in your favorite bottles and glassware packaging, pouring rituals, and tastes great can’t compare to lager in general nowadays. Moreover, we are talking about beer which was first brewed about 600 years ago by the monks who received the fruits and the first spices to be carried along the silk route connecting Asia to Belgium! This year, we finally brought back some of that historical context with modern touch. [traveltext.id]

YEAR 2022 does not feel like it will end soon. Of course, you have made many plans to celebrate New Year’s Eve in 2023, plan to take a vacation with your family, make your own events at home and pray together to...

RAMU is inspired by the collective consciousness of the earth’s soil and ocean as one of Mother Nature’s legacies; an important element that needs to be cultivated properly for the next generations to come. The Tri Hita...

THAT’s true each region always has its own unique culinary delights and legendary places to eat. The city of Jember in East Java is no exception, which also has a number of exciting places to eat that you can visit. One...