IKN NUSANTARA AS A MILESTONE FOR INDONESIA’S CIVILIZATION 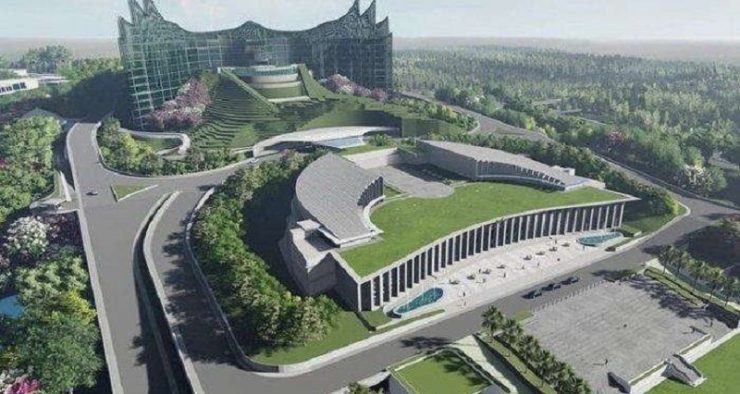 WE ARE targeting that in 2023, they (UAE) will enter IKN (Ibu Kota Negara or The Nation’s Capital). We have ensured that the US$20 billion investment will have entered, followed by other investments in other sectors.

When darkness looms over the world economy, the impact will affect several countries, including Indonesia. Moreover, discussions over relocation of the new capital city are getting more intense.

Furthermore, the world is entering the volatility, uncertainty, complexity, ambiguity (VUCA) era, which is an era with dynamics that are fast, unpredictable, and difficult to control.

However, the urgency of relocating Indonesia’s capital city called IKN Nusantara must be taken back to its original vision to open the gates for a new civilization to mobilize an Advanced Indonesia in 2045.

The Indonesian government implements IKN development without placing a heavy burden on the state budget since the composition of IKN financing is 20 percent from the state budget and 80% from investment.

Indonesian President Joko Widodo (Jokowi) often demonstrates his seriousness in realizing the relocation of the capital city from Jakarta to East Kalimantan.

The idea of moving the country’s capital city from Jakarta was first voiced by first president of the Republic of Indonesia, Soekarno, who was keen to move the center of government to Palangkaraya, Central Kalimantan.

During the reign of the second president of the Republic of Indonesia, Suharto, there was also the discourse to move the government from Jakarta to Jonggol, West Java.

Furthermore, in the era of the fifth president of the Republic of Indonesia, Susilo Bambang Yudhoyono, the discussion to relocate the capital city re-emerged along with Jakarta that was always hit by floods and acute traffic jams. However, all these plans did not make it.

In the era of President Jokowi, the Indonesian House of Representatives (DPR) completed its political work by approving Law Number 3 of 2022 concerning the State Capital. The government also quickly drafted a derivative regulation of the law as well as formed the IKN Authority Agency.

Jokowi seemingly wants to make IKN a milestone in Indonesia’s transformation as well as a legacy of his two leadership periods. All noble ideals regarding a national capital are contained in the grand concept of IKN Nusantara.

Jokowi’s seriousness is also demonstrated by the frequency of his visits to IKN Nusantara in East Kalimantan. This year alone, Jokowi has visited IKN twice with the substance of the visit being quite monumental.

In March 2022, Jokowi had gathered governors throughout Indonesia and concurrently invited them to camp in hilly areas that would become the zero point of IKN Nusantara. At the end of October 2022, the head of state also tested the sea route from Balikpapan to Penajam Paser Utara, which is the location of IKN, in order to follow the logistics route for the new capital.

The arrangement of the logistics route aims to ensure that IKN can become the new center of Indonesia’s economic growth.

Jokowi also attended the direct market poll for IKN Nusantara titled “IKN: A New History of a New Civilization” on October 18, 2022, in Jakarta. At the forum attended by domestic and foreign investors, the president specifically offered various potential and prospective locations in IKN to become investment targets as well as “prompting” potential investors to immediately realize their commitments.

IKN urgency
The IKN relocation process started since the inclusion of this Rp466-trillion project in the 2020-2024 National Medium-Term Development Plan (RPJMN). On January 18, 2022, the plenary session of the DPR passed Law Number 3 on the State Capital.

Seeing Jokowi’s seriousness and swift move, it is necessary to understand the urgency of moving the nation’s capital from Jakarta to East Kalimantan.

Jokowi emphasized that IKN would be a showcase for Indonesia’s transformation. The new capital city, which is targeted to be complete in 2045, will also be in line with development towards realizing the ideals of an Advanced Indonesia in 2045. On the 100th anniversary of Indonesia’s independence, the government targets the country to record an economic growth to rank among the world’s top five. In 2045, Indonesia’s gross domestic product (GDP) per capita is projected at US$23,119.

Economic transformation requires concrete changes in various fields. The development of IKN is one of the tools for the government to accelerate this transformation.

This transformation is realized by building a modern, smart, and environment-friendly city in IKN Nusantara for the future of Indonesia. Hence, IKN Nusantara will reflect the supporting capacity of adequate infrastructure, effective regulation, and efficient bureaucracy.

It will also be supported by green economic resources by utilizing electric vehicles and power plants for new and renewable energy, without using fossil fuels. The second urgency is to encourage inclusive and equitable economic growth throughout Indonesia, including in the eastern region.

So far, big cities on the island of Java, such as Jakarta, Surabaya, and Bandung, are known as the centers of government and economy. All national policies also come from the elites in Jakarta.

Relocation of the capital city to the outer islands of Java is expected to encourage inter-regional trade, encourage investment in the province of the new capital city and surrounding provinces, and boost economic diversification.

Thus, an economic multiplier effect is created alongside the creation of non-traditional sectors in various regions outside Java.

Based on data from Statistics Indonesia (BPS), so far, 59% of Indonesia’s economic turnover is on the island of Java. Meanwhile, Kalimantan Island only contributed 8.05% of the national economic turnover; Sulawesi, with 6.3%; Maluku-Papua, 2.24%; Bali-Nusa Tenggara, 3.6%; and Sumatra, 21.3%.

The third urgency is the heavy burden that Jakarta has borne as the nation’s capital. Jakarta continues to experience land subsidence, acute congestion, overcrowding of settlements, and various other things that trigger an increase in crime rates and a decline in the quality of life.

According to the World Bank research in 2019, traffic congestion in Jakarta has resulted in economic losses worth IDR65 trillion per year. Jakarta is ranked 10th as the most congested city in Asia. As a result of this congestion, an increase of one percent of urbanization in Indonesia can only increase 1.4% of the GDP per capita.

Minister of Public Works and Public Housing (PUPR) Basuki Hadimuljono said it would be more expensive for the government to conduct repair work in Jakarta than building a new capital city.

Meanwhile, Minister of Investment/Head of the Investment Coordinating Board (BKPM) Bahlil Lahadalia noted that Rp200 trillion of investment would already be included in the first phase of development of IKN Nusantara. Investment commitments have come from the United Arab Emirates (UAE), China, South Korea, and Taiwan.

“We are targeting that in 2023, they (UAE) will enter IKN. We have ensured that the US$20 billion investment will have entered, followed by other investments in other sectors,” Lahadalia noted.

Meanwhile, several European countries have submitted offers, with some of them being brought to President Jokowi.

Keeping the commitment
With these various urgencies, there needs to be an understanding of the importance to develop IKN Nusantara.

This project already has a legal basis with the issuance of the IKN Law that is supported by 93 percent of the total faction members in the DPR. Law Number 3 of 2022 is also lex specialist. That way, all provisions specifically regulated in the IKN Law, the general arrangements (lex generalis) in other laws do not apply to the IKN Law.

However, the sustainability of IKN development should not beat other government programs that are important for the welfare of the people, especially in the midst of the current threat of inflation and rising interest rates.

The government, in this case, at least needs to maintain a commitment to only use state budget funds of 20% of the total IKN development costs. The government must keep its promise to work hard to find investors to finance IKN Nusantara. Thus, the realization of the future capital city will become a milestone for the Indonesian civilization. [antaranews/photo special]

A VISIT to Semarang is not complete without visiting the icon of Lumpia City, namely the Old Town area, which you can explore on foot. The area which is included in the ranks of the UNESCO World Heritage City has many...

CUBAN CIGARS ‘MADE IN JEMBER’, APPARENTLY HAS BEEN CIRCULATED IN THE WORLD

WHO WOULD have thought that Jember is one of the regencies in East Java that is synonymous with tobacco. Even this tobacco plant has become a ‘trade mark’, so that Jember has the characteristics and variety...

BALINESE PENJOR, SYMBOL OF THE MANIFESTATION OF GOD’S PALACE IN MYTHOLOGY