THE MOVEMENT OF RI’S TOURISM AMIDST OF ECONOMIC RECESSION ISSUES 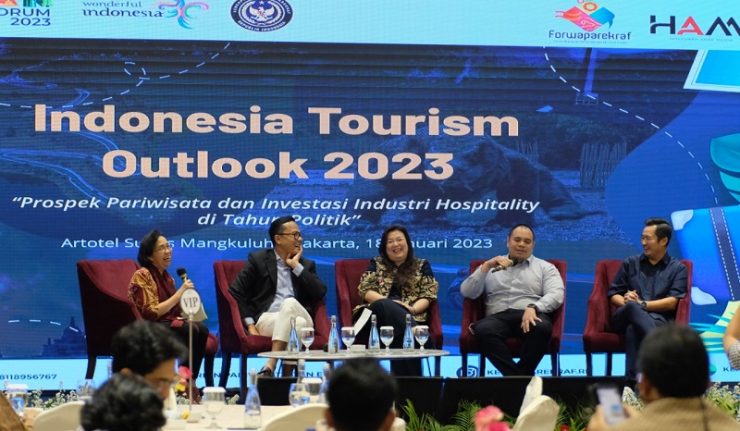 THE TOURISM sector is one of the backbones of the national economy. For this reason, the most important thing from the Indonesian tourism sector is to strengthen domestic destinations.

According to President Director of InJourney, Donny Oskaria explained, the most important thing from the Indonesia’s (RI) tourism sector is strengthening domestic destinations. This can be a way to attract domestic and foreign tourists to Indonesia.

“Foreign tourists are expected to have a positive tourism balance. almost 90% of us are outbound players in the foreign exchange outflow balance. Meaning that foreign tourists are important for a positive balance sheet, so this is what the government is doing,” Dony said during the Indonesia Tourism Outlook 2023 with the theme ‘Prospects for Tourism and Hospitality Industry Investment in the Political Year’ held by the Tourism and Creative Economy Journalists Forum (Forwaparekraf) and the Jakarta Media Association (HAM), at ARTOTEL Suites Mangkuluhur, Jakarta, Wednesday (01/18), 2023).

Of course, he continued that it is no longer common to do so through fiscal policy, for example making people pay for visas to go abroad. But what is being done strengthens domestic destinations.

“It’s not surprising that InJourney continues to develop tourism destinations with the aim of increasing domestic and foreign tourist arrivals. What InJourney is doing is building and developing destinations, in five destinations. Joglosemar (Jogyakarta, Solo, Semarang) number one. We developed Semarang into an integrated old town which is truly extraordinary,” he noted.

Donny concluded but 82% most of the old buildings there belong to State-Owned Enterprises (BUMN), we will renovate them to make them an extraordinary attraction, shopping malls, hotels, cafes and restaurants, so this is the main attraction.

Even though there is potential for a slowdown as the political campaign begins in August or September, Pandu admits that he is quite optimistic because so far, the business sector in Indonesia is still investing.

Regarding the hospitality industry such as hotels, he also sees more and more investment and this shows Indonesia as a stable country.

“People see that Indonesia can host the G20 and be safe. This year we are also hosting the ASEAN Summit. God willing, we can carry out this task well, and I think it will also move the wheels of the economy, and most importantly the wheels of the tourism economy which must be developed more,” Pandu remarked.

Likewise, the President of FATA/Astindo, Pauline Suharno, thinks that Indonesia is actually less focused on promoting itself in ASEAN. In my opinion, tourism in Indonesia is underdeveloped compared to other countries, even though the Human Resources for tourism are extraordinary.

“We lost to Vietnam, already using ASEAN standards. Indonesia just used the ASEAN standard made by the Indonesian team. There are several factors when tourists choose to travel in ASEAN countries. Especially when a pandemic strikes. There are things that are considered related to security that foreign tourists are looking for,” said Pauline.

“Flight tickets are expensive. Look at the value of money, the time wasted, some of the issues that are a concern for foreign tourists’ safety and security. Incentives of other countries try a lot of corporate incentives. Airports provide incentives for airlines to fly. in Indonesia, the flight approval was a little slow,” added Pauline.

On the other hand, the movement of the hotel world in Indonesia continues to increase even though the economic recession continues.

According to ARTOTEL Group Founder & CEO, Erastus Radjimin, said that to grow tourist destinations, adequate hotel development is also needed. This was quickly captured by the Artotel group when building the Sanur area and is now an attractive and up-to-date tourist destination.

“Eight years ago in Sanur, most of the average population demographics lived 50 years and over. The first time we woke up we were quite reckless. We get comments from many people, ‘ARTOTEL should build a hotel for the elderly, not for young people, but we’re not there. We built ARTOTEL Sanur with a modern, contemporary concept inspired by a local hotel. But at that time, we were surprised that the demographic age of the majority was 30-40,” he explained.

Erastus added that the transition occurred in Sanur slowly. Now, Sanur is a destination like Uluwatu. We can see that the Sanur transition is slowly happening. Incidentally, we noticed that 8 years ago, now Sanur has changed from a destination for retired parents to a really happening place.

“Sanur is now the next Canggu and Uluwatu starting to have a lot of beach clubs, lots of retail malls. We hope that from the hospitality side in Sanur, the Sanur Special Economic Zone (SEZ) which is now being carried out by the government will make extraordinary breakthroughs as a great major Clinic hospital, no kidding. There will bring in patients, doctors, conferences, pharmaceutical companies based in Sanur. I think it’s time for Sanur to rise again,” he explained.

He added that this year’s Government targets the investment to reach IDR1,400 trillion. Efforts to attract investors in the tourism sector are also continuing, especially investment in 5 super priority destinations and tourism Special Economic Zones (KEK).