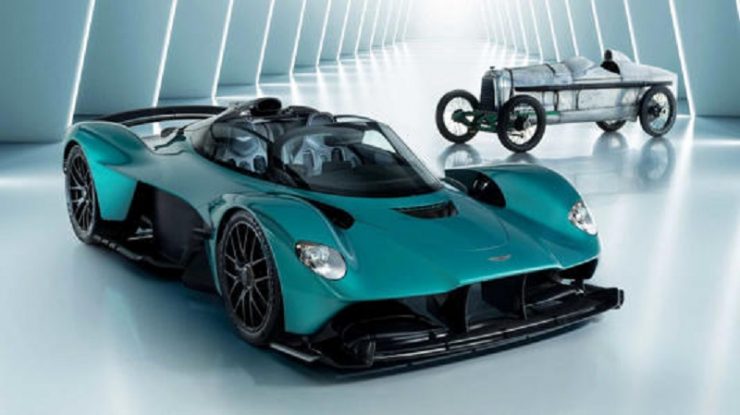 THE FIRST model of the next-generation sports car is also coming in 2023. On January 15, 1913, Lionel Martin and Robert Bamford joined forces to build what would become the first Aston Martin.

To mark 110 years of this collaboration, the Gaydon-based company is planning a year-long celebration. For starters are photos of the Valkyrie hypercar posing next to a 1923 Razor Blade, one of the oldest surviving racing cars.

2023 is being touted as a “monumental year,” with exciting cars coming in the next 12 months. A “very limited and exclusive new Aston Martin model” will be launched later this year.

The British brand didn’t elaborate on this vehicle, so it’s unclear whether this limited-production model is based on the Valkyrie or something else.

It could be a completely different vehicle as Aston Martin is known for its interest in low-volume products, such as the Vulcan, as well as one-offs like the Victor.

In 2023, we will also see the first model of the next generation sports car, which promises to “further enhance Aston Martin’s focus on ultra-luxury, high performance and driving intensity.”

To be sure, this is not the DBS 770 Ultimate that debuted on January 18 as that model is from an older generation. Realistically, the company is likely referring to the Valhalla.

Originally previewed in March 2019 with the AM-RB 003 concept, the Valhalla originally had a twin-turbo 3.0-liter V6 engine. However, the next production version will use a 4.0-liter twin-turbo V8 with a flat crankshaft.

Aston Martin intends to make only 999-unit Valhalla, which is built around a full carbon fiber body to keep the dry weight less than 1,550 kilograms (3,417 pounds).

Its combustion engine can spin up to 7,200 rpm and produce more than 800 hp, complemented by an electric motor with more than 200 hp.

In addition to launching two cars, Aston Martin will celebrate its 110th anniversary at the 2023 British F1 Grand Prix at Silverstone.

In addition, Aston Martin is also planning something special for the Goodwood Festival of Speed, Pebble Beach Concours d’Elegance, and other important events organized in countries that have a strong customer base. As a final note, Aston Martin has sold over 110,000 cars in the 110 years that have passed since its founding. [sources/photo special

THE AUDI Activesphere is the latest in a series of concepts that represent the company’s vision of future mobility. The automaker calls it “A luxury coupe that turns into a pickup. Like its predecessors, the...

PORSCHE will celebrate its 75th anniversary in 2023. The company’s first model, the 356, was launched in June 1948, and the automaker is honoring its past with the new Vision 357 concept. The Style Porsche team...

IF FERARI no longer makes combustion-engine cars, then the Italian manufacturer could lose a large part of their character. The screams of high-revving V8 and V12 cylinder engines are legendary and an important part of...