SANDIAGA: ACCELERATION OF VACCINATION SPURS THE RECOVERY OF TOURISM SECTOR 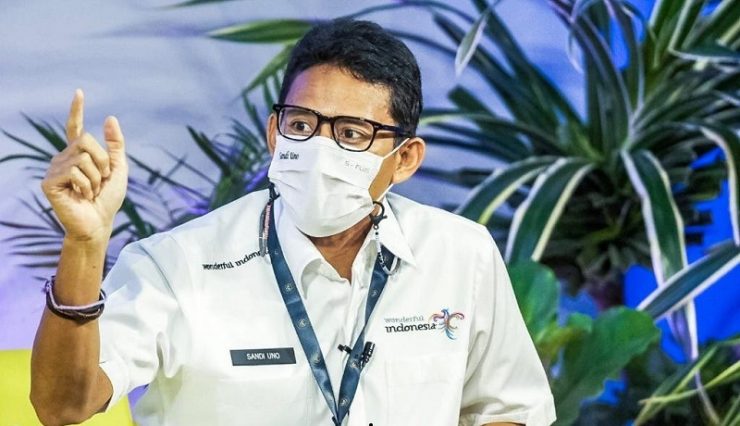 INDONESIA’S Minister of Tourism and Creative Economy, Sandiaga Uno, has pushed for the acceleration of the vaccination program in an effort to restore the tourism sector and the creative economy in Indonesia.

Sandiaga in his Weekly Press Briefing, Monday (7/19) said that until now, the community in the tourism sectors and creative economy who have been vaccinated is still below 10%, while the target to be achieved is 90-95% of the 34 million people who depend on their livelihood in the sector.

“The president directs us to have a ‘sense of crisis’. Therefore, three million vaccination targets per day must be collaborated with stakeholders so that the COVID-19 pandemic can be controlled, as well as stimulate the economy and create jobs in the tourism sector,” said Sandiaga.

He explained, for that we are currently making campuses in six tourism National Universities (PTNs) and three authority offices as vaccination centers.

Since February 2021, the Ministry of Tourism and Creative Economy has facilitated vaccination of more than 32,641 people through the facilitation of vaccine centers aimed at the general public as well as tourism and creative economy players.

These efforts were carried out by the Ministry of Tourism and Creative Economy in collaboration with the Ministry of Health, provincial and district/city governments, Grab Indonesia, Traveloka, Homecare24, Alodokter, Counters, and Tiket.com which were held in Bali, Jakarta, Yogyakarta, Batam, and Bintan.

At the beginning of the second semester until the end of 2021, the Tourism Ministry will also continue to encourage new vaccine centers. At the end of July, Tourism Ministry also facilitated a vaccination center located at SESKOAU Lembang in collaboration with Danone Indonesia and Homecare24 as well as at MNC Kebon Sirih and MNC Kebon Jeruk, in collaboration with PT. MNC, Doctora and Traveloka.

He hopes that the program can be implemented every month until the end of 2021 as an effort to support the central government’s vaccination target to achieve ‘herd immunity’. [traveltext.id/photo special]