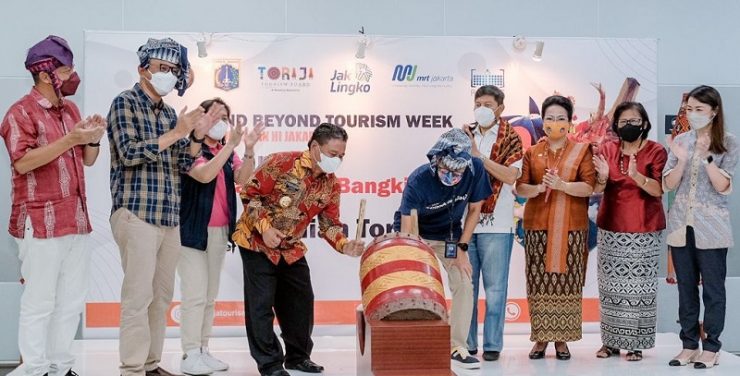 THE INDONESIA’S Ministry of Tourism and Creative Economy, together with the local government of South Sulawesi and a number of relevant stakeholders launched #TorajaPariwisataBangkit as a joint effort and commitment to restore the tourism sector and the creative economy in Toraja and South Sulawesi in general by prioritizing three main pillars, namely adaptation, innovation, and collaboration.

According to the Minister of Tourism and Creative Economy, Sandiaga Uno, who launched the #TorajaPariwisataBangkit at the peak of the “Toraja and Beyond Tourism Week” event, Sunday (10/3) at the Bundaran HI MRT Station, Jakarta, said Toraja and Beyond Tourism Week which has been going on since 30 Last September was the result of a collaboration between the Ministry of Tourism, DKI Jakarta Provincial Government, MRT Jakarta, South Sulawesi Regional Government, and the Toraja Tourism Board, to promote the tourism potential and creative economy of South Sulawesi, especially Toraja.

Sandiaga affirmed that Toraja is one of the icons of Indonesian tourism. The wealth of nature, culture and creative economy products make Toraja a favorite destination for tourists, both domestic and foreign. However, just like other destinations in the country, the COVID-19 pandemic has had a considerable impact on tourism and the creative economy in Toraja.

“Toraja has world-class creative economy products, namely coffee and weaving. In addition, there are also performing arts and religious tourism. So, in my opinion, Toraja is very complete as a destination that should be visited by both domestic and foreign tourists,” he added.

Sandiaga explained that Toraja and Beyond Tourism Week itself is part of a series of events leading to the Toraja Arts Festival which will be held from 17 to 23 October. This activity is a mini-exhibition that presents Micro Small and Medium Enterprises (MSMEs) typical of the Toraja region, promotions of tour packages, as well as presenting various dance arts and distinctive cultures. The visitors also had the opportunity to see firsthand the weaving process of the MSME community.

Also present on the occasion were the Regent of North Toraja, Yohanis Bassang; President Director of PT. MRT Jakarta, William Sabandar; and Chairman of the Toraja Tourism Board, Panca R. Sarungu. [traveltext.id]