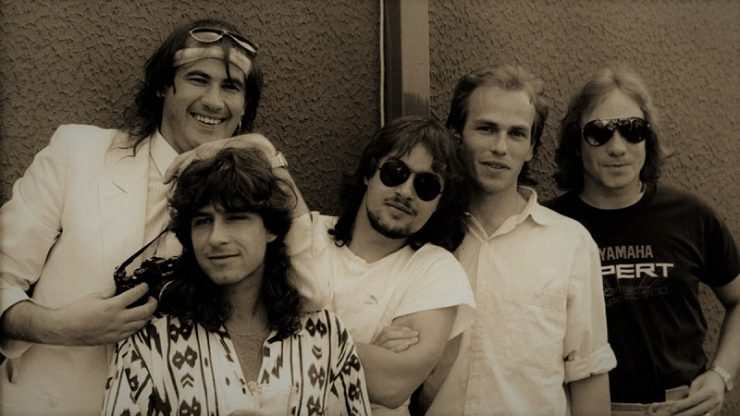 MARILLION are a British rock band, formed in Aylesbury, Buckinghamshire, in 1979. They emerged from the post-punk music scene in Britain and existed as a bridge between the styles of punk rock and classic progressive rock, becoming the most commercially successful neo-progressive rock band of the 1980s.

Marillion’s recorded studio output since 1982 is composed of nineteen albums and generally regarded in two distinct eras, delineated by the departure of original lead singer Fish in late 1988 and the subsequent arrival of replacement Steve Hogarth in early 1989.

Marillion is arguably one of the most interesting and successful progressive rock bands of the ’80s. Often considered one of the founders of the Neo-Progressive genre, the band released four albums between 1983-1987 that quickly gained a cult status within the demanding prog circuit. Influenced by ’70s acts such as Genesis (Gabriel era), Yes and Pink Floyd, Marillion issued their critically acclaimed debut Script for a Jester’s Tear” in 1983, an album that blends Genesis ‘early baroque languages with the rock flavours of the early ’80s.

The band achieved eight Top Ten UK albums between 1983 and 1994, including a number one album in 1985 with Misplaced Childhood, and during the period the band were fronted by Fish they had eleven Top 40 hits on the UK Singles Chart. They are best known for the 1985 singles ‘Kayleigh’ and ‘Lavender’, which reached number two and number five respectively, with ‘Kayleigh’ also entering the Billboard Hot 100 in the United States.

Marillion’s first album released with Hogarth, 1989’s Seasons End, was another Top Ten hit, and albums continued to chart well until their departure from EMI Records following the release of their 1996 live album ‘Made Again’ and the dissipation of the band’s mainstream popularity in the late 1990s; save for a resurgence in the mid- to late-2000s, they have essentially been a cult act since then.

Marillion have achieved a further twelve Top 40 hit singles in the UK with Hogarth, including 2004’s ‘You’re Gone’, which charted at No. 7 and is the biggest hit of his tenure. Marillion continue to tour internationally, becoming ranked 38th in Classic Rock’s ‘50 Best Live Acts of All Time’ in 2008. In 2016, they returned to the UK Albums Chart Top Ten for the first time in 22 years with their highest chart placing since 1987.

Despite unpopularity in the mainstream media and a consistently unfashionable status within the British music industry, Marillion have maintained a very loyal international fanbase, becoming widely acknowledged as playing a pioneering role in the development of crowdfunding and fan-funded music. They have sold over 15 million albums worldwide.

Indeed, there are still four questions that always linger in the minds of Marillion fans that are still a mystery, but with the passage of time all these questions have finally been answered after waiting several years for a definite answer.

What is Fish from Marillion real name?
Derek William Dick, better known as FISH (born 25 April 1958), is a Scottish singer-songwriter and actor. He achieved prominence as the lead singer and lyricist of the neo-progressive rock band Marillion from 1981 until 1988. In his solo career he has explored contemporary pop and traditional folk and rock.

What happened to Fish from Marillion?
Former Marillion frontman Fish has told Planet Rock why he’s calling it a day in 2020. The singer, real name Derek Dick, told fans in a blog post back in March that he’ll be retiring in 2020 following a farewell tour that year.

Does Fish still sing with Marillion?
Fish became widely known as the lead singer and lyricist of the neo-progressive rock band Marillion from 1981 until 1988.

When did fish leave Marillion to go solo?
They achieved further chart success in the UK, attaining top-ten hit singles in 1985 with ‘Kayleigh’ and ‘Lavender’, and again in 1987 with ‘Incommunicado’. In 1988, due to the stress of touring and the detrimental effect it was having on his health, Fish left Marillion to pursue a solo career.[sources/photo special]

SWEDISH band ABBA released their first studio album in 40 years on Friday (11/5), but fans expecting new songs may be disappointed as this could be ABBA’s last work. “I think the other three people will say...