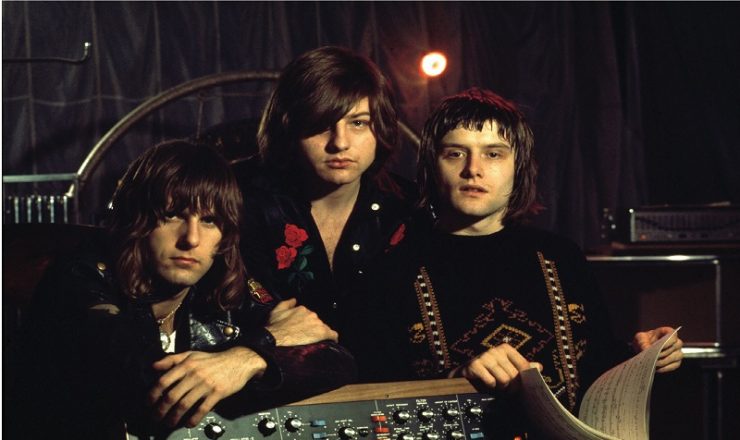 In the years leading up to 2016, when both Keith Emerson and Greg Lake died, ELP released songs that have become staples of classic rock radio: ‘From the Beginning,’ ‘Fanfare for the Common Man’ and ‘Peter Gunn.’

ELP disbanded by the 1980s and Palmer formed Asia with bassist John Wetton, guitarist Steve Howe and keyboardist Geoff Downes. In 1985, Emerson and Palmer hoped to reform ELP with Palmer, who had a few weeks of recording commitments with Asia. Rather than wait for Palmer, Emerson and Lake recruited drummer Cozy Powell to join the group; the combination resulted in one LP.

Carl Palmer the one left after both member passed away took part in a few ELP reunions while continuing to perform with Asia. In 2001 Palmer started his own band with bassist Simon Fitzpatrick and guitarist Paul Bielatowicz. Today the group continues as Carl Palmer’s ELP Legacy. Palmer tells Rock Cellar that he hoped to celebrate the 50th anniversary of ELP’s debut LP this year with a multimedia tour that will “reunite” the three bandmates, who were filmed at the Albert Hall in 1992. The COVID-19 pandemic has put a hold on the tour, but not on Palmer’s creativity.

Since 1973, Palmer has experimented with a new art form. Using lights attached to the ends of his drumsticks, he had photographs taken while drumming that transform his playing into abstract art. But it would be more than 30 years before a company developed a drumstick with vibrantly colored LED lights in the tip that are strong enough to withstand the stress of Palmer’s drumming.

Working with SceneFour in Los Angeles, Palmer’s drumming is shot in a darkened enclosure with cameras using multiple positions and shutter speeds. The result is transferred to canvas and conveys the rhythm Palmer brings to songs like ‘Lucky Man’ and ‘Heat of the Moment.’ Proceeds from the sale of Palmer’s artwork go to various charities.

According to Carl Palmer, the band was scheduled to do an ELP 50th and Beyond world tour this year. This was the 50th anniversary, which I was going to celebrate with a tour with my band and playing with some local youth orchestras. I wanted to introduce younger orchestras in America to the music. There’s about eight or nine of them that I could have done some concerts with. But obviously the tour is on hold.

Palmer explained that normally I was always in the middle, stage left would be Greg, stage right would be Keith. So, we decided to put the drums stage left, Greg in the middle and Keith stage right where he’d always been. Well, we shot some footage, the footage is fantastic, the camera work is absolutely perfect because both of them are almost side by side, they’re not split up with me being in the middle.

“So, we have some great footage, which I’ve now managed to adapt and edit along with the soundtrack. We’ve treated it in such a way where I could use the footage of Greg and Keith playing about four or five ELP songs and I could actually play along with them in situ, obviously with a click track and we’ll sync it all up. CPL could start off on its own doing our stuff and then we could slip straight into ‘Knife Edge’ or ‘Lucky Man’ or ‘Fanfare for the Common Man,’ he remarked.

The longer pieces, Palmer continued like ‘Tarkus’ and ‘Pictures at an Exhibition’ don’t work but the shorter pieces we could definitely make work. And of course, I could still have Keith up on the screen playing piano on his own, ‘Creole Dance,’ and I have Greg doing ‘From the Beginning’ and I could be live on stage playing the conga drums with him while he’s on film.

“So, we’ve got all of that arranged and all of the material is in place to do it. Both of the families, the Lake family and the Emersons, are fine with it so we worked it all out. I made sure they get something and I said well, we’ll do it. So that is on the shelf,” Palmer concluded. [rockcellarmagazine/photo special]