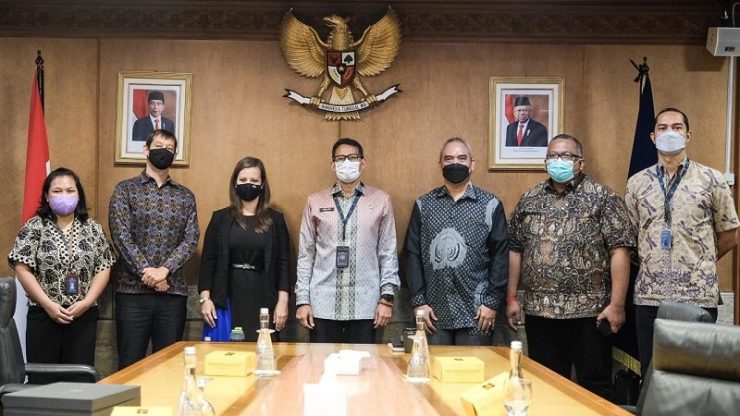 THE MINISTRY of Tourism and Creative Economy held a meeting with the Hungarian Ambassador to Indonesia, Lilla Karsay, at the Sapta Pesona Building, Ministry of Tourism Office recently. The presence of Lilla Karsay is an honorary visit and an introduction to the Minister of Tourism and Creative Economy that she is currently serving as the new Ambassador of Hungary to Indonesia. Both agreed to strengthen cooperation in the tourism sector and the creative economy.

According to the Minister of Tourism and Creative Economy, Sandiaga Uno, said that Hungary is one of the countries that has strong creative economic potential. Among them have advanced film and startup industries. I hope that Indonesia can establish cooperation with Hungary in the film industry.

“Hungary has the Hungarian Film Festival, we can collaborate on this. We also hope for the best practice exchange of films and animation, so that later we can advance film in both countries,” said Sandiaga.

Sandiaga asked Hungary to support the implementation of the G20 which will be held in 2022. In addition to the big event, it is hoped that there will be cooperation between the two countries in organizing various types of events.

“We are also preparing several events, such as the Indonesia Wellness Festival. If there is an event that can be collaborated, let’s collaborate,” he remarked.

Meanwhile, the Tourism Ministry’s Regional II Marketing Tourism Director, Raden Sigit Witjaksono, said that Hungary was one of the countries allowed to enter Bali. He hopes that this can be used to collaborate as much as possible.

“We have opened Bali, and Hungary is a country that can visit it, this has great potential for us to collaborate,” Sigit added.

Furthermore, Hungary conveyed a lot of potential for cooperation between Indonesia and Hungary. These include wellness tourism, to education in the tourism sector.

“There is a complex strategy that will discuss how to increase tourists. We can share what has been done in the past. There were 2 million tourists before the pandemic. Please note that we have more tourists than residents,” she said.

Lilla hopes that this meeting will further strengthen the bilateral relations between Hungary and Indonesia that have existed before, for the progress of the two countries, especially in the tourism and creative economy sectors.

“We are ready to collaborate for the advancement of the tourism sector and the creative economy in Hungary and Indonesia,” Lilla concluded. [traveltext.id]

THE PACIFIC Asia Travel Association (PATA) in partnership with global hospitality, travel and tourism sector organisations released a new methodology to guide hotels on how to set a net zero pathway. The Net Zero...

HOW TO MAKE AN ATTRACTIVE BUSINESS PROPOSAL FOR INVESTORS?

WHAT makes a business proposal attractive to investors? Indeed, sometimes without us realizing a proposal that we make can determine the success or failure of the proposal as desired by investors. Well, check the...

FACING the rainy season at the end of this year, car owners have to take extra care of their favorite car. In contrast to the dry season, four-wheeled vehicles generally need more intense maintenance during the rainy...