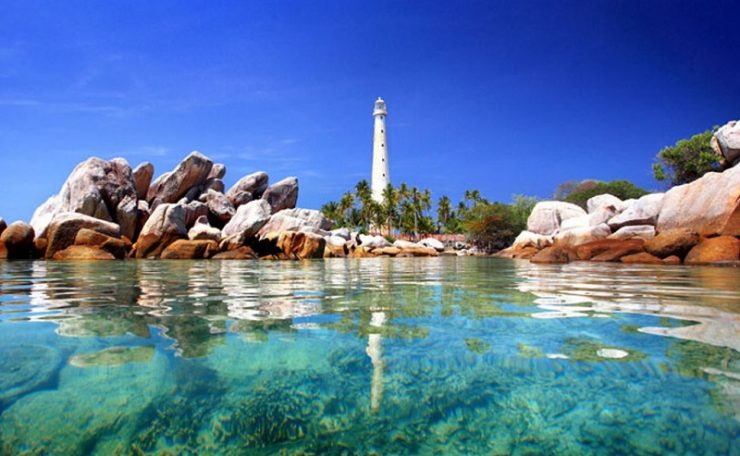 IT IS no longer a secret that Belitung Island has a stunning beach beauty, this area has been exposed thanks to the novel and film ‘Laskar Pelangi’. You have the opportunity to enjoy the beauty of Belitung beach all day long, what else can you do to visit five islands at once in a day.

1. Pulau Batu Garuda
This island is so named because the granite rocks there resemble the head of an eagle when viewed from Tanjung Kelayang. The beaches in Belitung are known to have granite rocks around them, the height can reach tens or even hundreds of meters.

So high and close, Batu Garuda Island can be seen with the naked eye from Tanjung Kelayang Beach. The island can be reached in just five minutes by motor boat. Unfortunately, visitors are not allowed to descend to Batu Garuda Island. According to the captain of the ship, this island has coral reefs that must be protected so that local authorities forbid ships to approach.

Even though you can’t go down, the experience of seeing Garuda Batu Island from afar does not diminish at all because tourists can ask the boat to stop for a moment. Photographing the rock formations on this island must be done from a distance so that the shape resembles the head of an eagle.

Given that there are still many locations to visit, the group did not linger around Garuda Bird Island. We immediately left for the next beach on Batu Berlayar Island.

2. Pulau Batu Berlayar
At first we did not understand why this small island was named so. Local people, kindly explained that the local people liken the two largest granite rocks on the island to the sails of a ship.

On this island, visitors are allowed to descend and see the granite rocks up close. On Batu Berlayar Island, some granite rocks are gentle enough to climb so that visitors can take pictures on the rocks.

Granite stone exposed to water is usually plastered with barnacle shells, the shell is very hard, can easily injure human skin. Tourists are strongly advised not to try to climb the granite rock which has barnacle shells at the bottom.

Even though the skin is very hard, if you are lucky, visitors can get barnacle shells that are still fleshy. On Batu Berlayar Island, one of the attractions is being able to try the barnacle shells freshly taken from the rock. The raw barnacle shells tasted fresh and salty because the shells were exposed to seawater.

3. Pulau Pasir
After being satisfied with taking pictures and playing on the beach of Batu Berlayar Island, the ship departs for the next destination. We want to try our luck to visit Pasir Island (Sands island).

If you lucky on our side that day. Gusung, or ‘gusong’ in the local dialect, is usually seen because the sea water is receding. The location, called Pulau Pasir, is actually a sandbar that can be stepped on during low tide. When we visited the water conditions were ‘pulling’, between the highs and lows, so that Pasir Island would be able to last until noon. If the tide is high, this cluster of sand will sink.

Visiting Pulau Pasir, it feels like walking on sea level because the width of the gusung is less than a hundred meters. Visitors should be careful not to step into the deeper locations.

Another luck that day, if we are able to see the starfish submerged around the Pulau Pasir. The size of the starfish that was there that day was quite large, far exceeding the size of an adult hand.

If you want to photograph starfish, it’s a good idea to keep in mind that these animals cannot survive if they are out of sea for too long. It would be wise to keep the starfish underwater when shooting.

4. Lengkuas Island
Among the islands visited, Lengkuas Island is arguably the most extensive and the most visited by tourists. The attraction there, besides the beach, is the lighthouse from the Dutch era, built in 1882.

Unfortunately, now the lighthouse is no longer accessible to tourists, however, it is still allowed to take pictures or walk around it.

The waters around Lengkuas Island are also a recommended location for snorkeling. For this activity, tourists can usually ask the travel agent who dispatched them. This island is also a fun place to relax while drinking young coconuts because there are several snack vendors there.

5. Kelayang Island
The island is quite close from the Tanjung Kelayang pier, however, we visited it last to get closer to the way home. After getting wet on the beach, Kelayang Island can be an option for a beachside lunch location.

On the shore of Kelayang Island, several tent stalls sell a variety of seafood (seafood) plus rice for lunch. The menu may be simple, but the taste is not inferior to restaurants because they usually use fresh seafood.

Lunch on Kelayang Island can usually be ordered as a package with a tour around the island. After lunch, other activities await on this island, including exploring caves, snorkeling, canoeing and rowing.

Don’t forget to prepare a good physique, sunscreen and a change of clothes so that you can enjoy your holiday exploring the beaches in Belitung to the maximum. [antaranews/photo special]