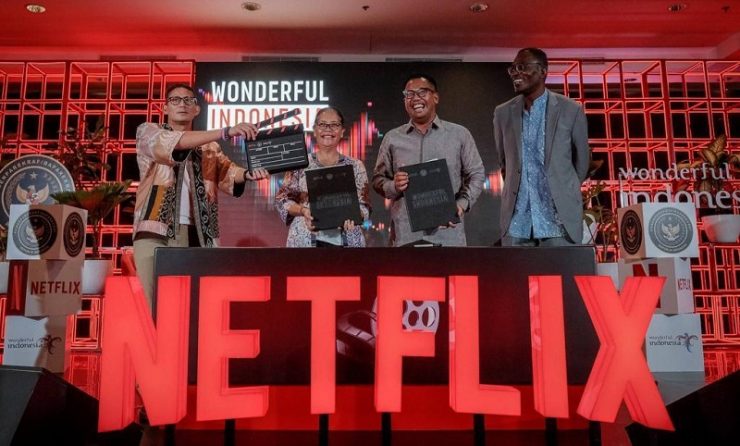 THE MINISTRY of Tourism and Creative Economy collaborates with Netflix in an effort to promote tourism through content and develop films in Indonesia. This cooperation was marked by the signing of a memorandum of understanding.

The signing of the MoU by the Acting Deputy for Marketing at the Ministry of Tourism and Creative Economy, Ni Wayan Giri Adnyani, with Netflix’s Director of Public Policy, Ruben Hattari, witnessed by the Minister of Tourism and Creative Economy, Sandiaga Uno and Netflix’s Vice President of Global Public Policy, Dean Garfield, Tuesday (9/6) in Jakarta.

The collaboration includes the creation of a variety of content that elevates Indonesia’s tourism potential and creative economy. Starting from tourism destinations, culinary, creative economy products from various regions in Indonesia, as well as authentic local stories that will open a world window for Indonesia.

“I hope that this collaboration will also be our momentum to accelerate recovery and a stronger awakening,” said Sandiaga.

In this collaboration, Netflix officially released a promotional video for the Wonderful Indonesia campaign. The promotional video contains a compilation of clips from various Netflix original content that shows views of tourism destinations, culinary, and creative economy products from various regions in Indonesia. In the coming year, the Wonderful Indonesia campaign will also be followed by activation activities and other online content to encourage international and domestic interest to return to Indonesia.

This collaboration is also launched right after the latest announcement from Netflix regarding a series of upcoming Indonesian films and series on Netflix, which is expected to improve the creative industry even more.

Sandiaga hopes that in the future there will be more local stories that will be raised so that it will effectively promote Indonesian tourism. The power of film as a means of promoting Indonesian tourism has proven to be effective, such as the film “Laskar Pelangi” which raised the image of Belitung tourism, “Eat, Pray, Love” which raised the image of Bali tourism, and many others.

“We hope that there will be more in the future that we can collaborate with both policies that will encourage more opportunities for Indonesian content to be shown on Netflix, which reaches 220 million members in 190 countries,” Sandiaga remarked.

Through this collaboration, Sandiaga hopes to provide data that can be used as a reference, including potential content that can be developed and presented to the wider community. Not only local but global.

Meanwhile, Netflix’s Vice President of Global Public Policy, Dean Garfield, said that we are optimistic that collaboration with the Ministry of Tourism and Creative Economy will bring many benefits and he hopes to present more Indonesian original stories to international audiences.

Netflix, said Dean, had previously collaborated with many Indonesian film stakeholders, such as presenting a workshop on story development last week. [traveltext.id]