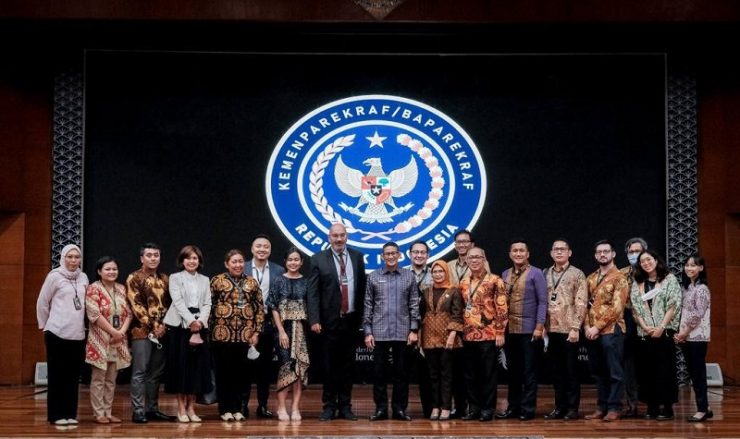 THE MINISTRY of Tourism and Creative Economy cooperates with the European-ASEAN Business Council (EU-ABC) to collaborate to advance the tourism sector and the creative economy in Indonesia after the COVID-19 pandemic.

In a meeting with the EU-ABC delegation at the Soesilo Soedarman Hall, Sapta Pesona Building, recently, Minister of Tourism and Creative Economy, Sandiaga Uno said during the COVID-19 pandemic, there were a number of achievements in the development of the country’s tourism and creative economy sector.

One of them, Indonesia managed to climb 12 ranks from 44th to 32nd in the Travel and Tourism Competitiveness Index (TTCI) ranking issued by the World Economic Forum (WEF).

“We managed to pass Malaysia and Thailand. This is arguably one of the achievements in the Indonesian tourism sector during the pandemic,” said Sandiaga.

Not only that, Indonesia also managed to rank first of the 50 most beautiful countries in the world according to Forbes. “For 18 months we have shifted the focus of tourism development towards sustainable and quality tourism and we prioritize ourselves in issuing policies that are right on target, right on benefits and on time,” he remarked.

“So I hope we can collaborate to produce solutions that in the future can develop Indonesia’s creative and creative sector in a more positive direction,” Sandiaga noted.

In response to this, the Deputy Chair of the EU-ABC, Tassilo Brinzer said that our party is ready to collaborate with the Ministry of Tourism to develop the tourism sector and Indonesia’s creative economy for the better. I am sure there will be many opportunities for us to work together and support each other to advance Indonesia’s tourism sector and creative economy. [traveltext.id]