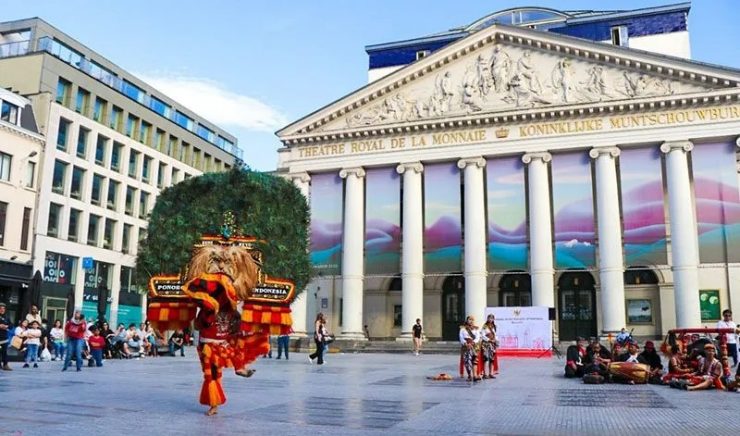 REOG Ponorogo, which is one of Indonesia’s distinctive arts, has been proposed as an Intangible Cultural Heritage of the United Nations Educational, Scientific, and Cultural Organization (UNESCO) on February 18, 2022.

As an effort to strengthen the submission, on Monday (12/9), the Indonesian Embassy in Brussels in collaboration with the Ponorogo Regency Government has brought the Reog Ponorogo team to display this art in the heart of the European Union, precisely at the Place de La Monnaie, Brussels.

“This aims to introduce Reog Ponorogo more extensively to audiences in Europe,” said the Indonesian Embassy in Brussels in a written statement, Tuesday (9/13).

These hundreds of people who were in downtown Brussels couldn’t help stopping for a moment and watching the reog Ponorogo series of performances.

Starting with the distinctive reog music consisting of angklung, saronen, kempul, and bonang babok, visitors were treated to a graceful and charming Jathilan dance.

Not only performing Reog Ponorogo performances, the dance team also took the time to interact directly with visitors who packed the Place de la Monnaie area. Starting from the strains of dangdut koplo music that makes visitors sway, to dancing together to the accompaniment of the Poco-Poco song.

The Reyog Ponorogo show is part of the Indonesia Month activities organized by the Indonesian Embassy in Brussels during September 2022.

Previously, the Indonesian Embassy held a discussion on the book Revolution by David van Reybrouck, as well as dance and music performances in Oostende, Belgium. In addition, there is also an exhibition of Indonesian cultural objects which are a collection of Belgian citizens, which are exhibited in an exhibition entitled De Schat van Indonesie or The Treasure of Indonesia.

“This activity is expected to further increase the interest and curiosity of Belgian citizens towards Indonesia,” said the Indonesian Embassy.

Seeing the response of visitors to this performance, the Indonesian government is optimistic that the hearing to determine the Intangible Cultural Heritage to be held by UNESCO at the end of 2022 will bring good news to Reog Ponorogo. [antaranews]