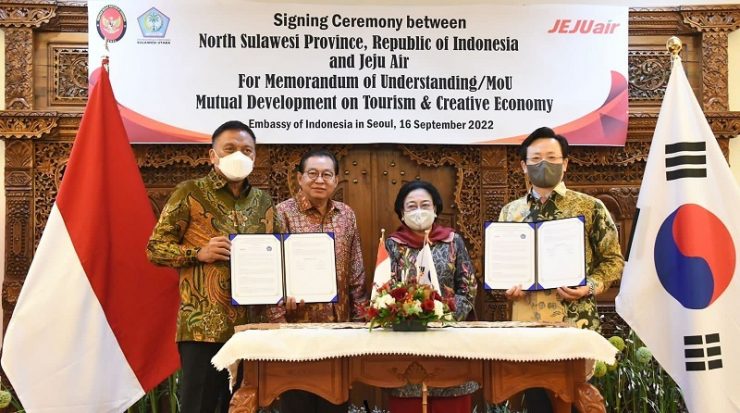 According to the Minister of Tourism and Creative Economy, Sandiaga Uno in his statement, Saturday (9/17) welcomed the signing of a memorandum of understanding between the Governor of North Sulawesi, Olly Dondokambey and Jeju Air, E Baek Kim in Seoul, South Korea on Friday (9/16) local time.

Sandiaga revealed that the signing of the memorandum of understanding is expected to be a trigger for economic revival and job creation in North Sulawesi.

“The Ministry fully supports the signing of this agreement, where this agreement will provide a multiplier effect in the future for the tourism sector and the creative economy in North Sulawesi. Because of course there will be an increase in the number of foreign tourist visits to North Sulawesi, especially those from South Korea,” said Sandiaga.

“This route can also be an opportunity for local tourism players to show the quality of their products and services for tourists from South Korea,” he said.

Meanwhile, Governor Olly Dondokambey said that the tourism sector is one of the strategic sectors that contributes to the country’s foreign exchange. Korean society is not a stranger to people in North Sulawesi because before the pandemic South Korean tourists were one of the most visited tourists to North Sulawesi.

The distance which is quite close to about 5 hours of flying duration from Jeju to Manado is expected to further increase the interest of South Korean tourists visiting North Sulawesi. In addition, he also conveyed the cultural and culinary similarities that were quite thick between the people of North Sulawesi and South Korea, such as spicy and sour dishes.

The signing of this memorandum of understanding was witnessed by the Head of the Steering Committee of the National Research and Innovation Agency (BRIN) Megawati Soekarnoputri, and the Ambassador of the Republic of Indonesia to the Republic of Korea, Gandi Sulistiyanto. [traveltext.id]