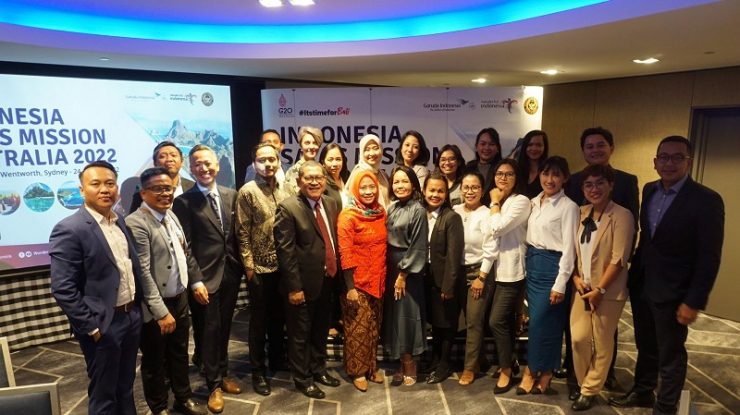 THE MINISTRY of Tourism and Creative Economy continues to strive to increase foreign tourist visits, especially Australia as one of the potential market countries. One of these efforts was carried out by facilitating 18 hotel and resort industry players to carry out a sales mission to Australia recently.

According to the Minister of Tourism and Creative Economy, Sandiaga Uno in his statement, in Jakarta (9/19), said the demand for Australian tourists to Bali was very high. This is supported by the easing of most travel requirements, the implementation of improved health and safety standards, new tourism product offerings, and increased efforts to amplify the uniqueness of Balinese culture.

“The Ministry of Tourism is committed to maximizing the potential of Australian tourists to boost economic revival,” said Sandiaga.

In addition, the Ministry of Tourism and Creative Economy takes this opportunity to network with other key industry players, namely wholesalers for the middle-up namely Luxury Escapes and Ignite Holidays, mass customers such as Flight Centre, as well as airlines Virgin Australia and Garuda Indonesia.

This activity was carried out with the mission of increasing the Wonderful Indonesia brand to remain the top of mind for foreign tourists around the world, especially the Australian market.

“Although Bali has become the top of mind of foreign tourists, Indonesia still has more destinations that are no less amazing than Bali. Call it the natural and cultural beauty in five super priority tourism destinations, namely Borobudur, Likupang, Mandalika, Labuan Bajo, and Lake Toba. which is so magical,” Sandiaga remarked.

The Ministry of Tourism is taking advantage of this tourism revival momentum by introducing three additional destinations, or add-ons, in plans for the next holiday for Australian tourists to Bali.

First is Labuan Bajo, a coastal city that is the gateway to Komodo National Park, which can be reached by a 90-minute flight from Denpasar. Labuan Bajo has a myriad of amazing allures with Padar Island which is the icon of Labuan Bajo, then Taka Makassar and Kanawa Island which has a very charming underwater beauty.

The second is Lombok, an alternative for those seeking tranquility and a comfortable family vacation on the beach which can be reached by 90 minutes fast boat or 40 minutes flight from Denpasar.

And finally, Borobudur, a paradise for history and culture lovers that can be combined with a day trip to Yogyakarta, the city that is the soul of Javanese culture. Borobudur is a combination of tropical vacation and anti-mainstream culture. This destination can be reached only by a 90-minute flight to Yogyakarta.

In 2019, before the pandemic hit, as many as 1.4 million foreign tourists from Australia visited Indonesia, of which 1.2 million or around 85% visited Bali. Of the number who visited Bali, only 16% traveled beyond Bali.

Since the pandemic conditions improved and international travel re-opened in March 2022, the number of Australian foreign tourists visiting Indonesia has continued to experience a significant increase, reaching 118,347 visits from January to June 2022.

“Through this sales mission, it is expected to bring in 3.6 million tourists with an income equivalent to US$1.7 billion,” he concluded. [traveltext.id]