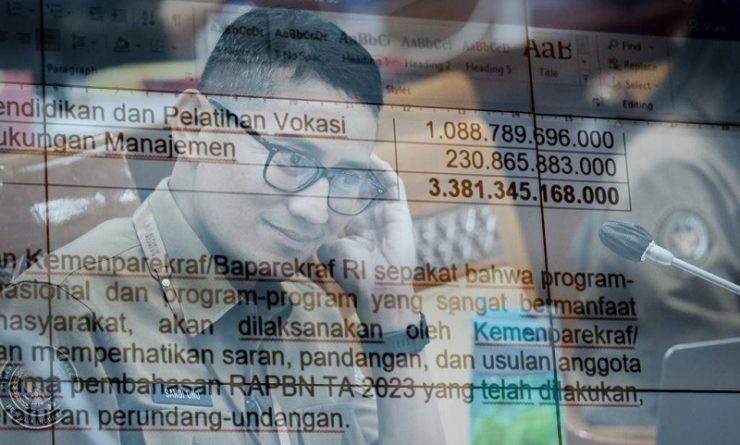 In a working meeting with Commission X DPR-RI at the DPR-RI Building, Central Jakarta, Thursday (9/21), Minister of Tourism and Creative Economy Sandiaga Uno said that this budget ceiling will be utilized as much as possible to develop Indonesia’s tourism and creative sector in a better direction.

“I want to give confidence to ladies and gentlemen that every penny, every rupiah we will manage and use for the revival of the tourism sector and the creative economy and focus on programs that are right on target, right on benefits, and on time,” said Sandiaga.

Sandiaga revealed that the Ministry of Tourism will carry out programs that touch Micro Small and Medium Enterprises (MSMEs) players and the support needed by people affected by inflation and the potential for a recession in 2023.

“We are very confident with the support, advice, input, and guidance from Commission X DPR-RI in 2023 we will be able to execute this program with a full sense of responsibility,” he said.

Meanwhile, Deputy Minister of Tourism, Angela Tanoesoedibjo added that this budget ceiling will be distributed to the central work unit in the amount of IDR1,905,921,409,000, IDR45,140,000,000 for the task of assisting local government organizations (OPD) in the creative sector, Rp. Implementing Authority, and IDR1,319,655,579,000 for the technical implementing unit (UPT) for tourism education.

Responding to this explanation, Deputy Chairman of Commission X of the DPR-RI Abdul Fikri Faqih, who acted as chair of the meeting, stated that the DPR-RI approved the definitive budget ceiling for the Ministry of Tourism and Creative Economy of IDR3,381,345,168,000.

“Commission X and the Ministry of Tourism have also agreed on national strategic programs and programs that are very useful and needed by the community to be implemented by the Ministry of Tourism and Creative Economy by taking into account the suggestions, views, and proposals of members of Commission X DPR RI during the discussion of the RAPBN for the 2023 fiscal year which has been carried out in accordance with the provisions of the legislation,” Faqih concluded. [traveltext.id]