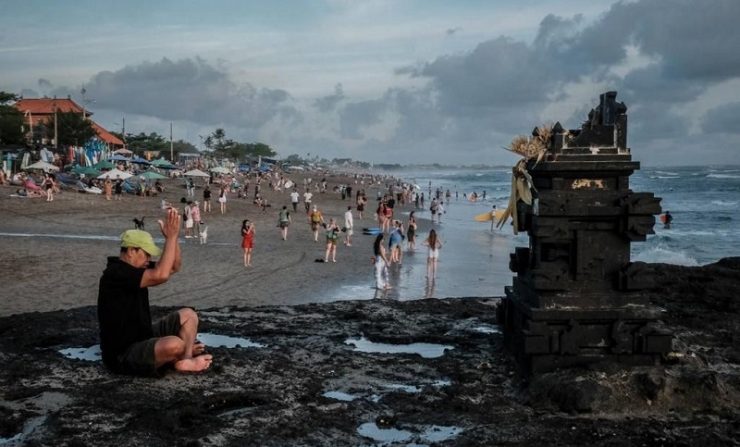 THE MINISTRY of Tourism and Creative Economy appreciates the agreement reached between tourism stakeholders and the Bali creative economy, especially in Canggu Village, Badung Regency, regarding the “Noise Pollution” issue and encourages the agreement to continue to be strengthened in order to provide quality and sustainable tourism services while still paying attention to local wisdom.

According to the Minister of Tourism and Creative Economy, Sandiaga Uno after meeting with all stakeholders such as the Bendesa Indigenous Canggu, Canggu Perbekel, Bali and Badung Tourism Offices, security as well as bar and restaurant managers in Canggu, Friday (9/16) said, the agreement reached is expected to bring Canggu to a better direction.

“Today, we are grateful to be able to stay in touch with all stakeholders and it has been reported that the previously reached agreement will continue to be monitored at the technical level by Head of Bali’s Tourism. Previously, the stakeholders in Canggu had agreed on 6 points,” he said.

Namely, Sandiaga continued the maximum sound decibel limit is 70 decibels for the outdoor area, the operational time limit is until 01.00 WITA, the commitment of business s and the community as well as the apparatus in the context of supervision in the field, the consistency of the community and entrepreneurs and (apparatus) and consistent monitoring together. continue to remind entrepreneurs and the surrounding community not to exceed the agreed limits. In addition, socialization efforts and enforcement of regulations will also continue.

“The agreement that has been reached previously will continue to be strengthened, including to be later improved in the form of regulation so that it can become a legal umbrella so that action can be taken if anyone violates the regulation. Tourism must be able to bring harmony and balance so that it must be able to pay attention to all sides so as to create comfort not only for tourists but also for the local community,” he noted.

Sandiaga added that I really hope that the agreement that has been submitted will be monitored and improved later in the form of a regulation that has taken into account the calculations of the times and we hope that this can lead Canggu to a better direction. under a legal umbrella that can be the basis for its implementation and supervision.

He added that President Joko Widodo paid attention to this. Moreover, in the near future, Bali will host the G20 Presidency, which previously also hosted a series of international events such as World Tourism Day, World Conference on Creative Economy, and others.

“We want this to be resolved with local wisdom and we hope that this is not the first time and we will monitor it until the G20. We hope that all of these can be resolved and what is prioritized is the traditional and cultural approach,” Sandiaga noted.

Furthermore, said Minister Sandiaga, this must be a momentum in an effort to bring about a better tourism arrangement in Bali. How will the Bali Provincial Government also be able to establish a Detailed Spatial Plan (RDTR) to make arrangements in terms of the designation of business activities.

Bali as the center of Indonesia’s tourism has a broad impact on people’s lives. So that the recovery that is currently underway with the presence of tourists can have a broad impact on economic revival and job creation, which this year is targeted to reach 1.1 million and 4.4 million new jobs in 2024.

“Why don’t we transform not only Recover Together Recover Stronger but also Recover Better. Because there are also other problems such as waste, water, environmental sustainability issues,” said Sandiaga.

Meanwhile, the Deputy Governor of Bali, Tjokorda Oka Artha Ardana Sukawati (Cok Ace) expressed his appreciation to the central government, in this case the Ministry of Tourism and Creative Economy, who paid great attention to the problems that were happening in Canggu. He said this should be a momentum for a thorough evaluation.

“This is an extraordinary concern from the central government and is a very important momentum to evaluate things that we really need to improve because tourism is dynamic, continues to grow. Of course, in this development there are also norms, there are regulations that we must agree on. , said Cok Ace.

He also encouraged that the points that had been agreed upon by both parties were also followed up by detailing technical matters.

“Like the 70-decibel agreement, where is it calculated from. Is it in front of the speakers, 10 meters, what 50 meters, what 100 meters, this has not been (agreed on) so it is very relative. So we ask for this to be completed in the agreement,” he stated.

He said this agreement would later become the forerunner in improving regulations because currently the existing regulations only regulate noise level limits for indoor areas.

“Because when (the regulations) were made in 2012, there was no such thing as a Beach Club and it must continue to adapt,” Cok Ace finished. [traveltext.id]