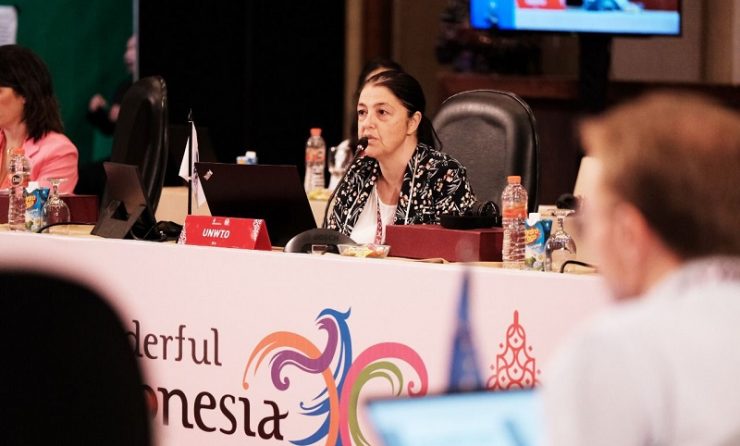 IN THE event of The 2nd Tourism Working Group, which is one of a series of G20 Summits, the Head of Delegate of the World Tourism Organization (UNWTO), Sandra Carvao explained the situation of the tourism sector and the creative economy globally after the pandemic.

According to Sandra Carvao, in her statement, at the Grand Hyatt Bali, Friday (9/23) said 2020 will be a very difficult year for the tourism sector and the creative economy due to the COVID-19 pandemic. At the end of 2021, international tourist arrivals were still less than one billion compared to 2019.

Hence in 2022 the tourism sector is in recovery mode. Along with the various efforts made, it has an impact on increasing tourist arrivals. Based on data compiled by UNWTO, it shows that the European region has a significant recovery and is almost close to the pre-pandemic figure of 74%. For America alone by 65%, and the Middle East 76%.

“And Asia-Pacific is still lagging behind at 14% of its recovery. However, we believe this figure will increase significantly in the coming months,” said Sandra.

In addition, the economic improvement of the G20 member countries is almost largely influenced by the tourism sector. Data for 2021 shows that 71% of exports come from tourism and 76 percent have an impact on increasing GDP globally.

This figure could be recovered in 2022 or even better. Sandra also hopes that through the TWG, G20 member countries will be able to work together to make changes to advance the tourism sector and the creative economy, as well as promote community-centred recovery and Micro Small and Medium Enterprises (MSMEs).

“Because MSMEs and communities around the world depend on the tourism sector for their income. This is a priority as well as a challenge in various countries,” she remarked.

There are several obstacles found in encouraging the improvement of MSMEs and community development. These include limited capital to changes in the target market. So that all need to prepare MSMEs that respond faster and are better prepared to face change.

“We also see that workforce volatility is one of the big challenges and thus it is very relevant that one of the guiding pillars is human resources,” Sandra noted.

This Tourism Working Group will produce the G20 Bali Guidelines in which there are a series of specific recommended actions to advance the objectives of implementing the five lines of actions and also a specific call for actions that can be implemented individually, voluntarily by either a group of countries or an international organization with a group of countries.

The main focus of TWG is the strengthening of communities and Smal, Medium Entreprises (SMEs) as agents of transformation of tourism and the creative economy, so that economic recovery must be community-centered and is expected to be able to prosper the community.

“I would like to thank all the groups that have contributed to ensuring that these guidelines will reflect the opportunities we have, but also the challenges that every MSME and community has in consolidating recovery especially in difficult times,” he said.

Meanwhile, OECD Head of Delegate Ekaterina Travkina explained that from a creative economy perspective, best practice should be adopted from South Korean pop culture content, from K-pop, K-drama, to K-variety shows. Because South Korea can package content very well and interestingly, even having an impact on the tourism sector. So, it is not surprising that South Korea’s creative economy is in second place in the world.

“Indonesia through the Ministry of Tourism and Creative Economy also carries out various programs to increase the capacity of human resources to excel and be able to face challenges. This can also be a best practice for us to apply in restoring our creative economy sector,” said Ekaterina.

To note, the G20 Bali Guidline will later be agreed upon by the Ministers at the Tourism Ministerial Meeting (TMM) which is the final series of the implementation of the Tourism Working Group. TMM is scheduled to take place in Nusa Dua, Bali on September 26, 2022 and will be attended by approximately 103 delegates. [traveltext.id]