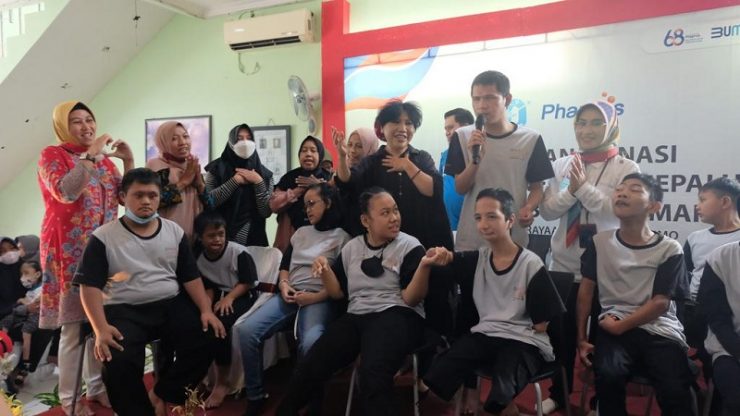 PT PHAPROS Tbk, which is part of the Holding State-Owned Entreprises Pharmaceuticals, provides assistance to children with hydrocephalus through the Wisma Kasih Bunda Foundation owned by one of the country’s fashion designers, Anne Avantie, which is located in Semarang, Central Java, recently.

According to the Production Director of PT Phapros Tbk, Ida Rahmi Kurniasih, said that this assistance is a form of Phapros’ gratitude, where this year one of its living legend brands, Antimo, has entered its half century age.

“Apart from being a form of gratitude, we distribute this donation to the Wisma Kasih Bunda Foundation to ease the burden on families with hydrocephalus children. Mrs. Anne has long been committed to helping those who need the very expensive cost of hydrocephalus surgery, and we also have a sustainable Social Responsibility program in the Health Sector, so at this right moment we are collaborating with Mrs. Anne Avantie’s foundation to lighten the load a little. our brothers and sisters in need,” said Ida.

Hydrocephalus, Ida continued that is the most common central nervous system disorder that occurs in infants, children and adolescents. Hydrocephalus is a condition characterized by an abnormally enlarged baby’s head. This condition can occur due to a buildup of fluid in the ventricular cavity of the brain, causing the brain to swell.

She added that the prevalence of hydrocephalus in Indonesia reached 10 per mil per year, with an incidence ranging from 0.2-4 per 1000 births. For Phapros itself, efforts to treat hydrocephalus have also become one of our focuses in product development, where currently Phapros already has a product that is the result of downstream research in collaboration with Gadjah Mada University and domestic researchers, namely INAShunt. This product is included in the category of medical devices with a hose-like shape that functions to drain excess fluid in the brain of people with hydrocephalus.

Meanwhile, Anne Avantie as the owner of the Wisma Kasih Bunda Foundation appreciated this assistance saying we are very grateful to Phapros for what was given to us today. Fifty years is a long journey for Antimo, and it turns out that there is a blessing that can be given to these special children through our Foundation.

Ida also said that the event that took place today was the beginning of several series of events to commemorate Antimo’s 50th anniversary. We will not stop here, there are several social events that we will hold in outer regions in Indonesia such as Sabang Island, in Aceh, and several other areas.

“This is done as a form of appreciation for all the loyalty given by loyal Antimo consumers so far, or our partners such as traders who have also supported Antimo’s existence during our 50 years of travel. We hope that Antimo will continue to be top of mind and always be the choice of family travel companions,” she concluded. [traveltext.id]

JEMBER Regency, one of the regencies in the East Java region, has extraordinary charm and wealth. Not much is known, Jember has a Tobacco Museum, a cigar-producing city, there is a coffee and cocoa Research Center which...

THE FIFTH edition of Art Moments Jakarta (AMJ), one of the country’s biggest art fairs of three days (4-6 November 2022) event returned to its original venue officially and which was opened on Friday afternoon, (11/4)...