INDONESIA-MALAYSIA TO STRENGTHEN IN THE TOURISM SECTORS COOPERATION 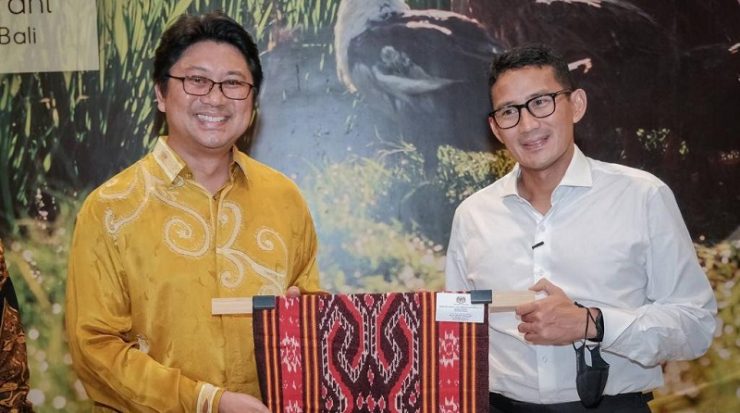 INDONESIA and Malaysia are collaborating to strengthen cooperation in the tourism and creative economy sectors in an effort to revive the economy and open up the widest possible business opportunities and employment opportunities.

In a meeting with Senator from Sarawak, Malaysia, Jaziri Alkaf Abdillah Suffian in Bali, Monday (11/14), Minister of Tourism and Creative Economy, Sandiaga Salahuddin Uno revealed that Indonesia and Malaysia had formed the Malaysia-Indonesia Business Council (MIBC).

The presence of the council which aims to improve business relations between Indonesia and Malaysia is expected to improve various business sectors in both countries, especially in the tourism and creative economy sectors.

“Because, Malaysia is one of the countries that contributes to many tourists visiting Indonesia. Earlier there were a number of initiatives that would be developed starting from (exporting) creative economy products such as music and weaving and also increasing the number of flights to both Jakarta and also to several tourist destinations, including Bali,” said Sandiaga.

Sandiaga said that with a number of agreed-upon initiatives, it was hoped that it could increase the number of tourist arrivals from Malaysia to Indonesia and boost the creative economy sector in Indonesia. According to him, many Malaysian tourists visit Indonesia for culinary tours.

“This shows that the Malaysian market really appreciates our culinary products,” he noted.

Meanwhile, Jaziri Alkaf Abdillah Suffian revealed that through this agreed upon initiative it was hoped that it would have a positive impact on the economies of Indonesia and Malaysia.

“So the existence of these new initiatives can bring benefits to both countries,” said Jaziri who also serves as Chairman of MIBC. [traveltext.id]