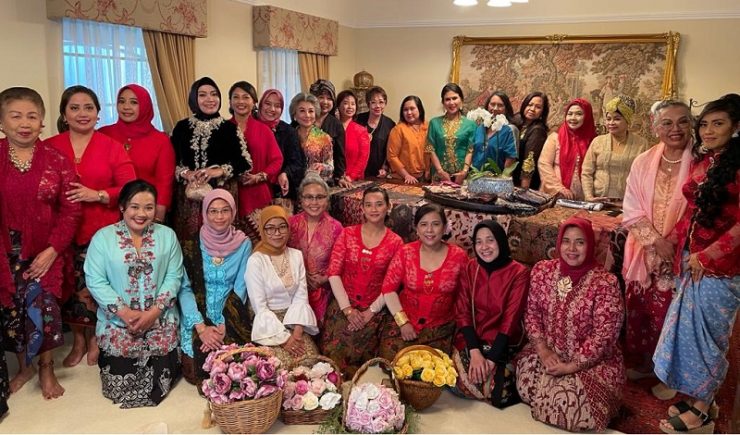 BATIK in Indonesia is the pillar of the nation’s culture, it is very natural that the commemoration of National Batik Day is always celebrated in Indonesia and in various representatives of the Indonesian state, especially since the stipulation of Batik as an Intangible World Cultural Heritage by UNESCO in 2009.

In commemoration of National Batik Day on last October 2, Indonesia is celebrating this big day at the international level. The reason is, an observer and batik lover in Perth, Western Australia, Lolita Larasati Hall with the support of Dharma Wanita of the Consulate General of the Republic of Indonesia (KJRI) held an Afternoon Tea event with the theme ‘Madura Heritage’.

According to Lolita Larasati Hall said in Perth, where since the 2019 pandemic, I as an observer and a lover of batik have not been able to visit Indonesia, as a healer of homesickness for Indonesia, I took the initiative to held this ‘Madura Heritage’ event to participate in celebrating National Batik Day 2021 at my residence in Willetton, Perth, Western Australia.

“Batik is one of the rich cultural traditions of Indonesia where Indonesian batik patterns are rich in philosophy. A pattern can tell a lot about the tradition and history of the place where batik was created. This event aims to make the people of Perth know about batik and the state of Indonesia,” she said.

She explained that the event opened with a choir singing the song Indonesia Pusaka created by Ismail Mardjuki, then continued with the Madurese dance accompanied by the song Tanduk Majeng. This dance is an offering from the Dharma Wanita KJRI Perth under the leadership of Mrs. Lenny Novita Dewi and continued with the talk ‘History of Madura’ delivered by H. Nanda Avalist S. IP, M.SI, where he is a native Madurese son who currently serves as Consul and Coordinator for Socio-Cultural and Economics.

“Well, speaking of Madura is certainly not complete without discussing the charm of the beauty of Madura Batik, which is very distinctive in its colors and motifs. There is talk about Patenteng batik which is almost extinct as well as Madura batik exhibitions from Gentongan and Madura batiks from 3 Bangkalan areas Tanjung Bumi, Pamekasan and Sumenep,” Lolita Larasati Hall remarked.

Not to be missed, she continued, there was a discussion about the meaning of Batik in the lives of Madurese women, which was conveyed by Prof. Rahmah Ida, Dra., M.Comm., PhD. She is a Professor of Communication Studies at Airlangga University who since the pandemic has lived and taught at various universities in Perth. Madurese specialties are also served from traditional Jamu as a welcome drink and Madura satay of course.

The event was attended by more than 40 guests from various mass and cultural organizations in Perth such as Jubaidi Anwar who currently serves as the President of the Diaspora, Bramante Perkasa as the Head/Pak Lurah of the Arek East Java Community in Western Australia.

“Essentially, the event that I created is with the hope that as Indonesians living abroad, we must be able to continuously participate in preserving the nation’s culture. In order not to be separated from their own cultural roots. If we don’t love our own culture, then who else?” Lolita Larasati Hall concluded. [traveltext.id]

THE MINISTRY of Tourism and Creative Economy held a meeting with the Hungarian Ambassador to Indonesia, Lilla Karsay, at the Sapta Pesona Building, Ministry of Tourism Office recently. The presence of Lilla Karsay is an...

BUSINESS OPPORTUNITIES FROM HOBBY OF COOKING DURING THE PANDEMIC

DURING a pandemic, people tend to have more time and opportunities to be at home. This encourages some people to find it easier to do hobbies and explore new things. Including one of them is cooking and making food...

THERE ARE three (3) surefire tips or strategies to achieve success in business for creative economy actors in Indonesia. The three tips given, first is cash is king. For example, changing the sales system into a pre...